The countdown is on – only two weeks until turkey day! Is your menu done? Is your shopping list made? If not, have no fear! This cornbread stuffing is delicious, flavorful, and can be made ahead to save you some time and stress on the big day. 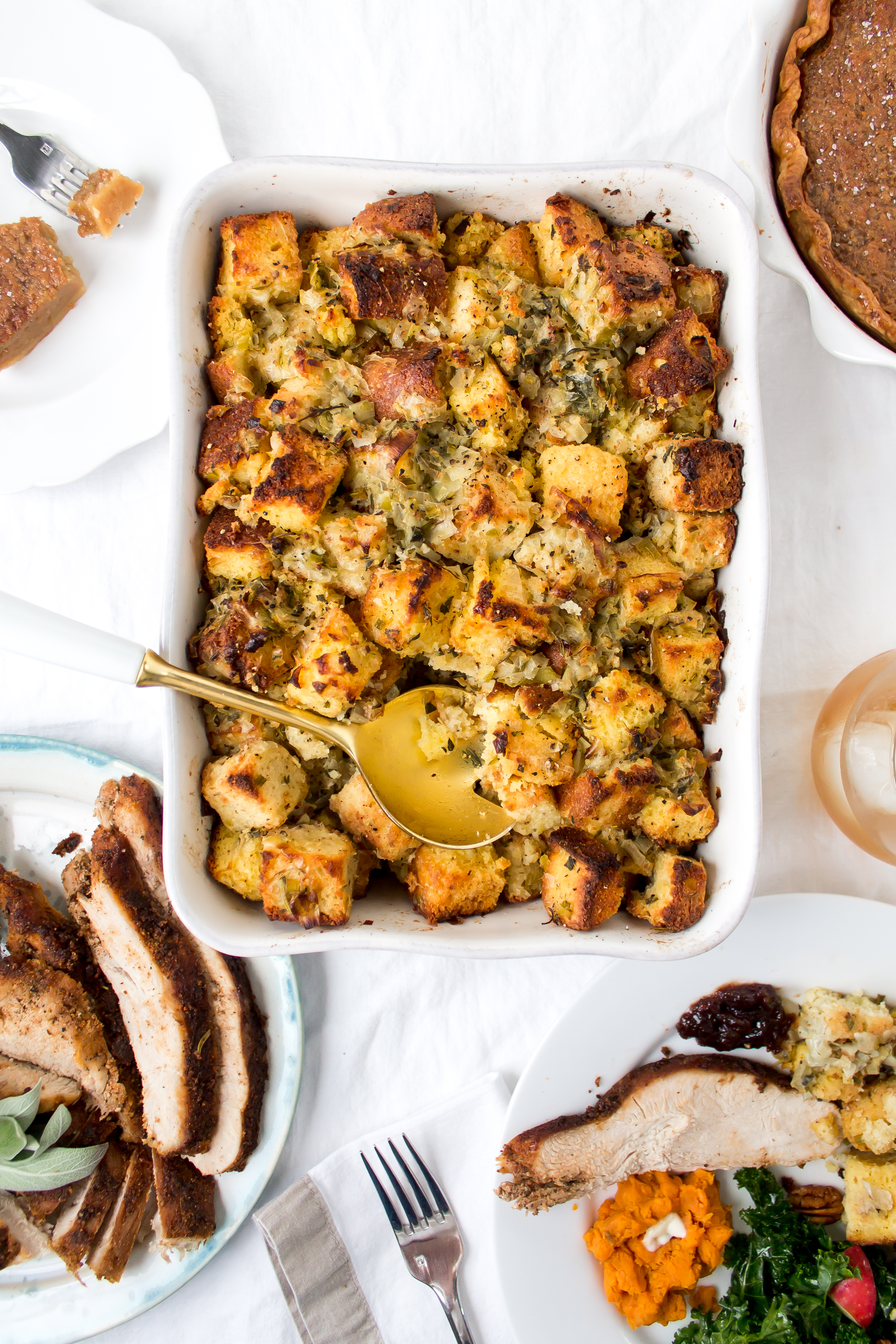 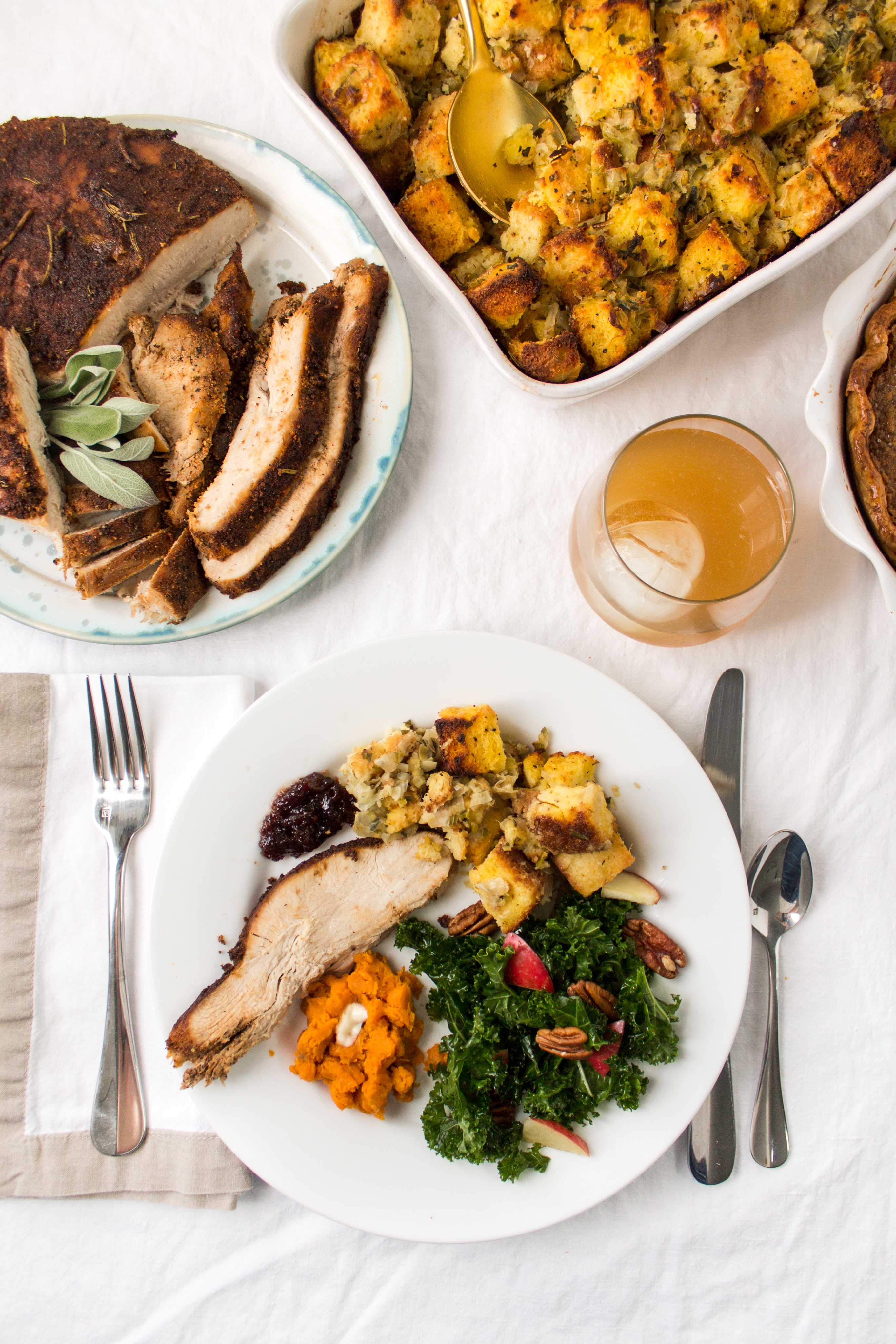 I think I’m more excited than usual for Thanksgiving this year because it is the first year that my siblings and I all live in different states and are all coming home for Thanksgiving, the first vacation Will gets in residency (and his first time home since moving), and because we have always traveled for the holiday and never had it at our childhood home. A lot of firsts, but all great, exciting ones. My family is serious about food and made our Thanksgiving menu back at the end of September (though we didn’t know about the pie that I’m sharing next week so it could change ;) ). As we were talking, we tried to include everyone’s favorite dishes. Of course, no one had the same favorite dish, so we ended up with almost the same menu as always with the addition of some new vegetable sides and desserts. My mom LOVES her mom’s classic stuffing recipe (think toasted, cubed white bread), so it made the cut, but I have never been a big stuffing person. That is, until I realized it could be made with cornbread. Game. Changer. 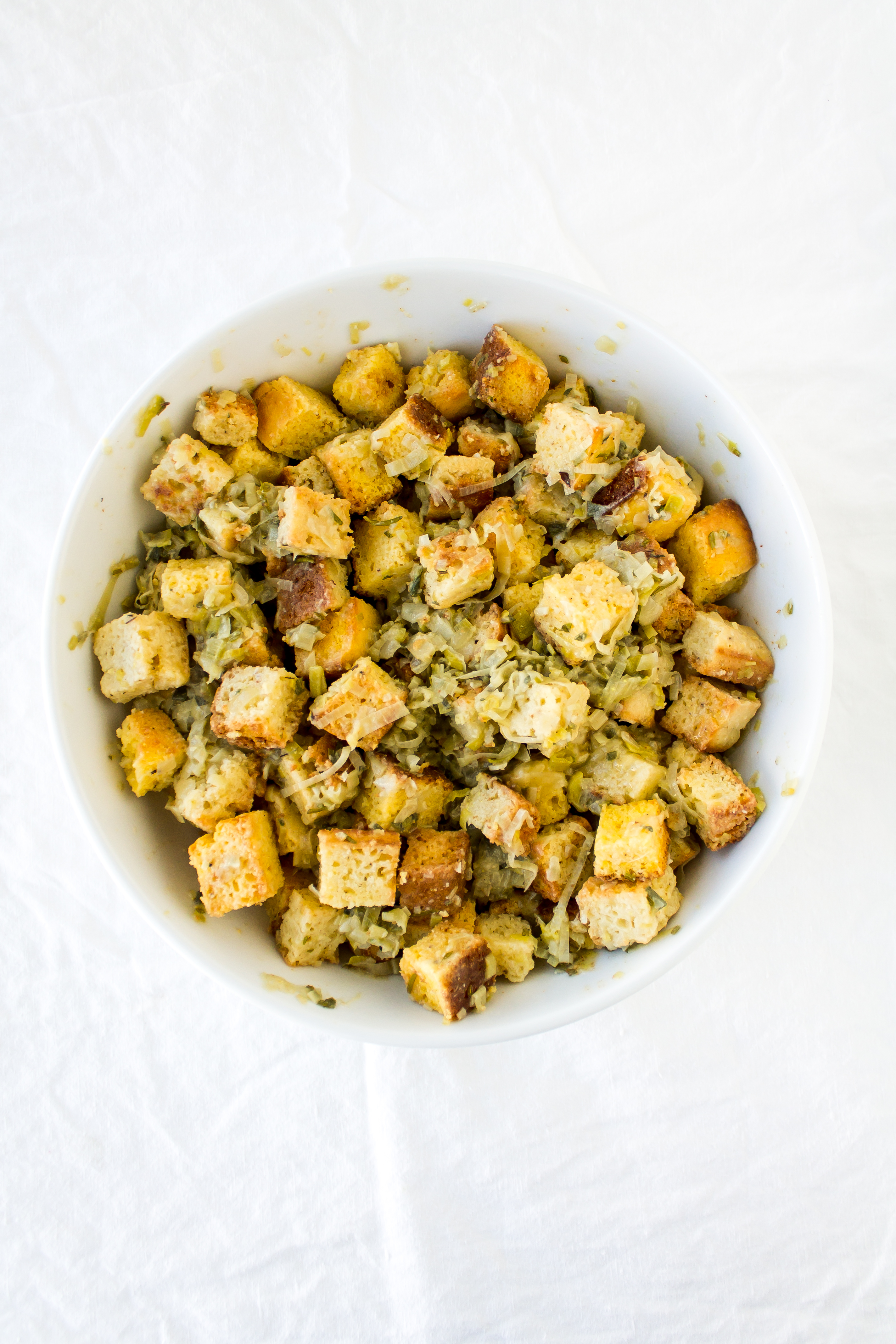 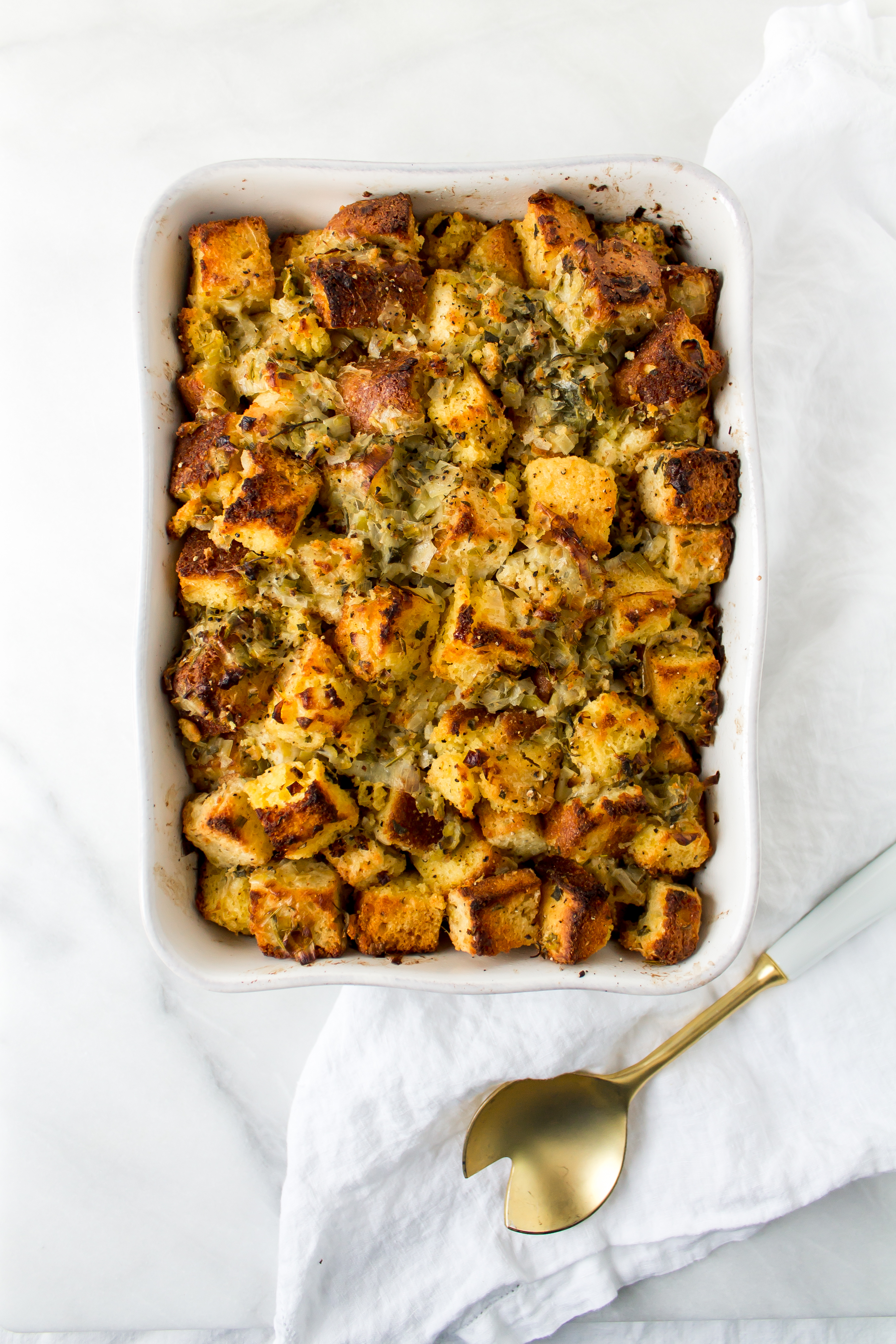 I love a good cornbread addition, and in this stuffing recipe it gives so much more flavor than regular white bread. I used the buttermilk cornbread recipe from Bon Appetit as the base and it was the perfect starting point. You can use your favorite cornbread recipe, or the Jiffy box, but I think the not-too-sweet flavor and the not-too-moist but also not-too-dry texture makes this one a real winner for a stuffing recipe. You can make the cornbread in advance, cube and toast it, toss it into the cornbread stuffing to cook or reheat days later for your big meal. By making it in advance, you can free up some kitchen space on Thanksgiving and have one less thing to worry about. 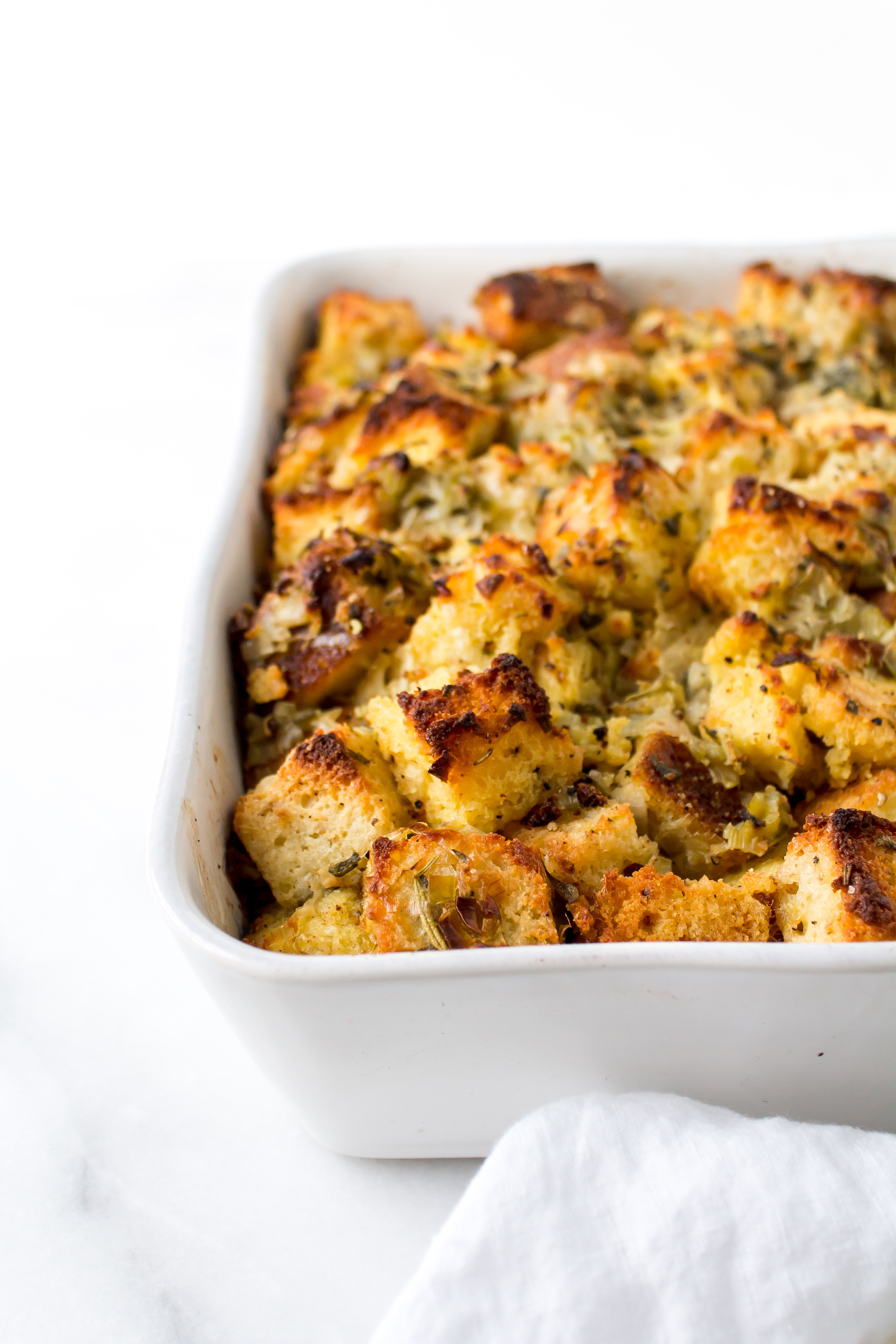 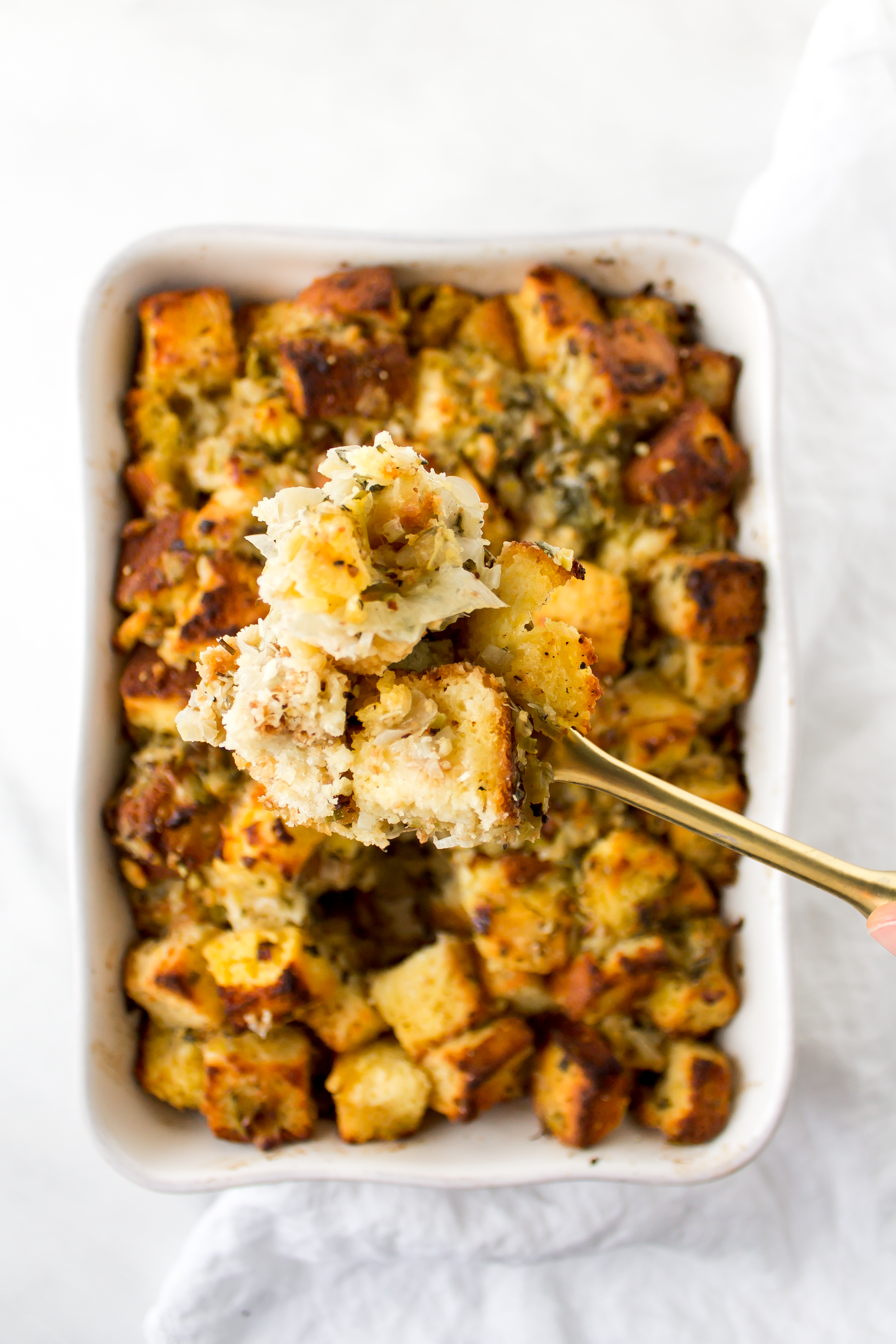 This cornbread stuffing is filled with herbs and leeks and both provide such delicious flavor. The buttermilk cornbread cubes soak up the creamy, turkey broth, leek, herb, and onion mixture to get that great softer texture underneath and toasty, crusty texture on top of the dish. Even as a self-proclaimed non-stuffing lover, I would gladly eat this on Thanksgiving and beyond. Now the only question is, who gets the corner piece? 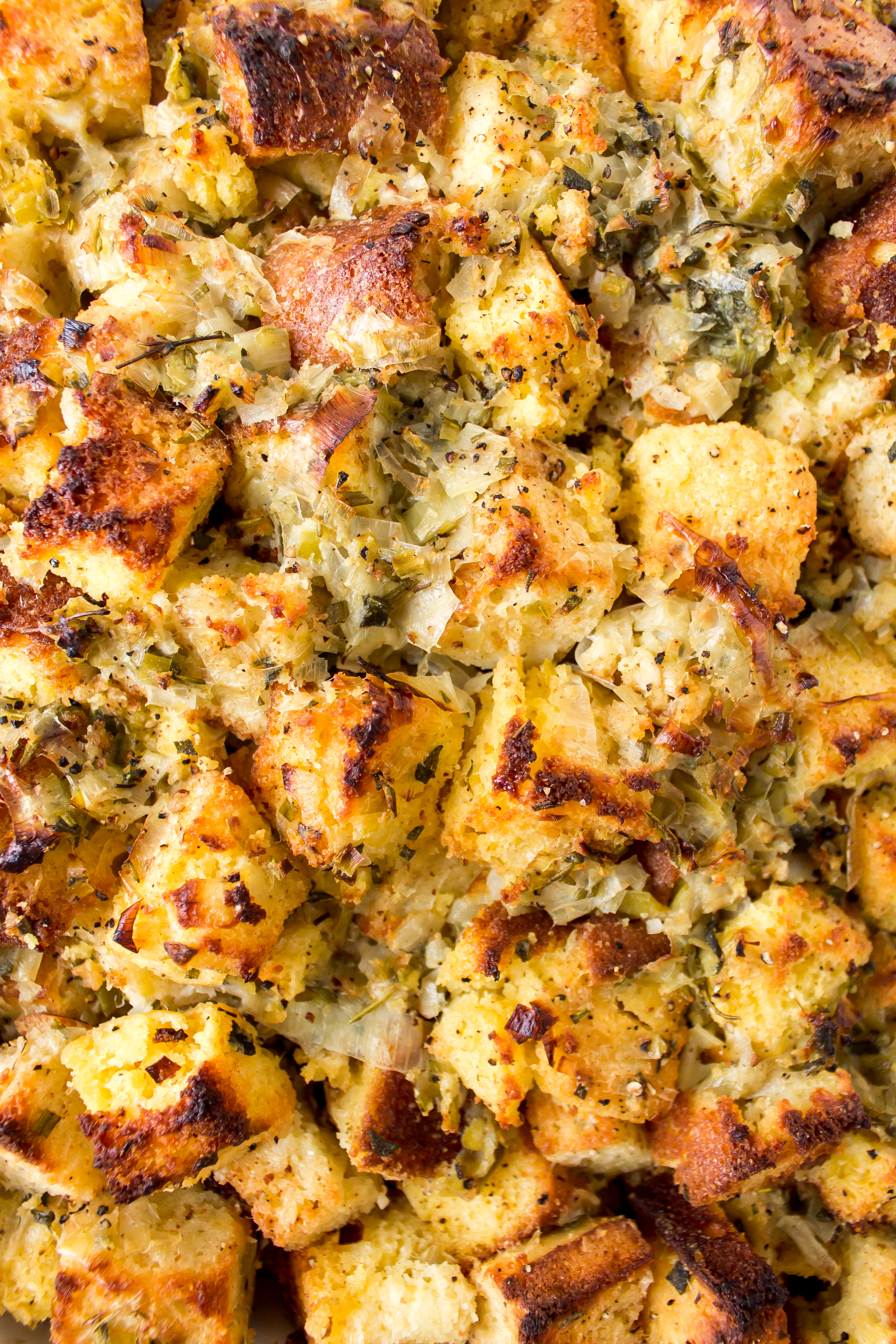 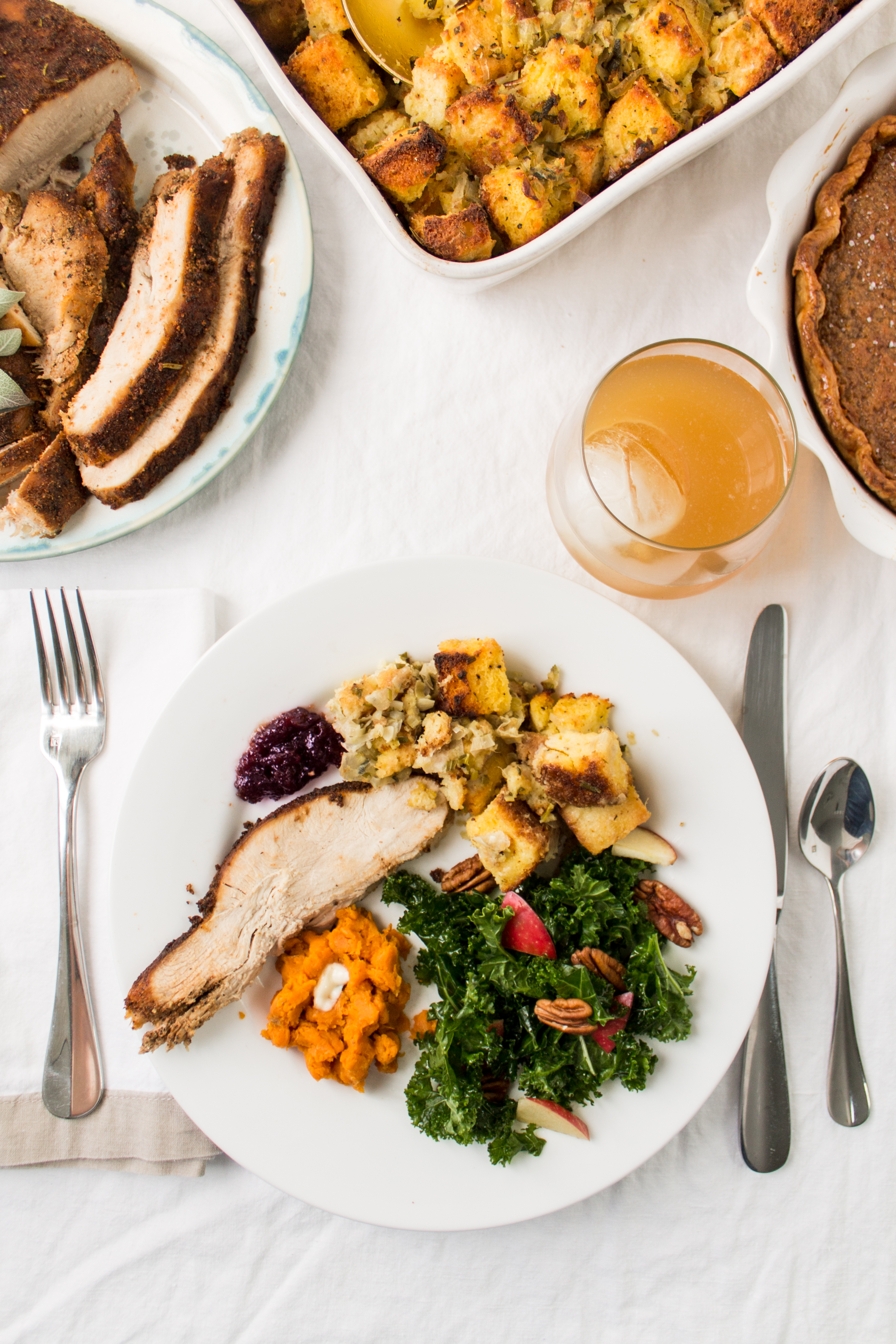 Filled with leeks and herbs, this cornbread stuffing is so flavorful and perfectly moist on the inside while still toasty on the outside. The cornbread provides a delicious base to the recipe and the whole dish can be made ahead – a Thanksgiving winner!

Preheat oven to 400°. Lightly coat a 13x9" baking dish with nonstick spray. Whisk flour, cornmeal, sugar, baking powder, salt, and pepper in a large bowl. Whisk eggs, buttermilk, and butter in a medium bowl. Make a well in the dry ingredients and pour in egg mixture; stir into dry ingredients with a wooden spoon until combined. Scrape batter into prepared pan and smooth top.

Bake cornbread, rotating dish halfway through, until a tester inserted into the center comes out clean, 20–25 minutes. Let cornbread cool slightly in dish, then cut crosswise into 4 large pieces. Transfer to a wire rack with a large spatula and let cool completely.

Do Ahead: Cornbread can be baked 2 days ahead. Store tightly wrapped at room temperature.

Preheat oven to 325°. Divide cornbread evenly between 2 large rimmed baking sheets and bake, tossing occasionally, until dried out and some pieces are golden browned around the edges, 40–50 minutes. Let cool at least 10 minutes. Increase oven temperature to 350°.

While bread is toasting, heat 4 tablespoons butter in a small saucepan over medium heat. Whisk continuously until brown bits form on the bottom (about 5 minutes), then immediately remove from heat and set aside.

Reduce heat to medium and melt the remaining 5 tablespoons butter in same skillet. Add onion, leeks and sprinkle with some of the salt. Cook, stirring occasionally, until soft but not browned, 5–8 minutes. Lower the heat, add garlic and sage and cook, stirring once, until very fragrant, about 1 minute. Add 1 cup of broth and cream and simmer, stirring occasionally, until cooked down a bit, about 3-5 minutes. Remove from heat and stir in thyme and rosemary. In a large bowl, toss the vegetable-herb mixture with the cornbread cubes.

In a separate medium bowl, whisk together the eggs and remaining broth until very well combined.

Lightly butter a 13x9x2" baking dish. Transfer the stuffing to your dish and tap the dish lightly against counter to distribute and compact the stuffing mixture. Cover it tightly with aluminum foil and bake until stuffing is very hot throughout and bubbles appear around the sides of the dish, about 40–45 minutes. Increase your oven temperature to 425°F and remove foil. Continue to bake stuffing until top is lightly browned, 15–20 minutes longer.