Sprinkles, sprinkles everywhere! Mondays are much better with funfetti brownie cake with cookie dough frosting! Can you even resist those pretty swirls, dark chocolate brownie chunks, and multi colored sprinkles?! 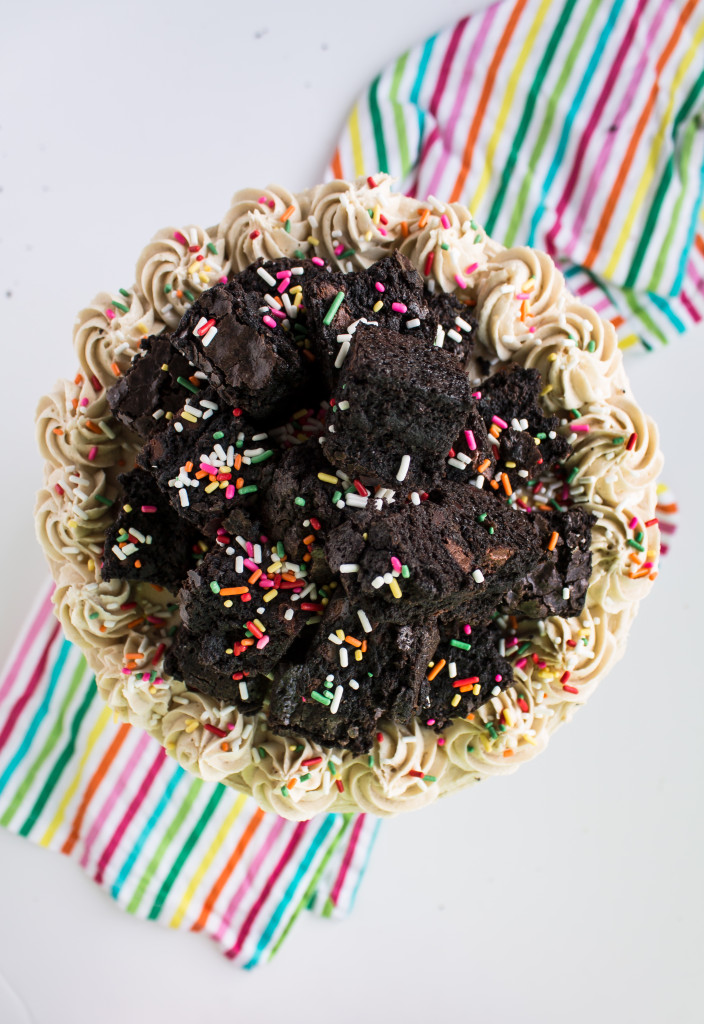 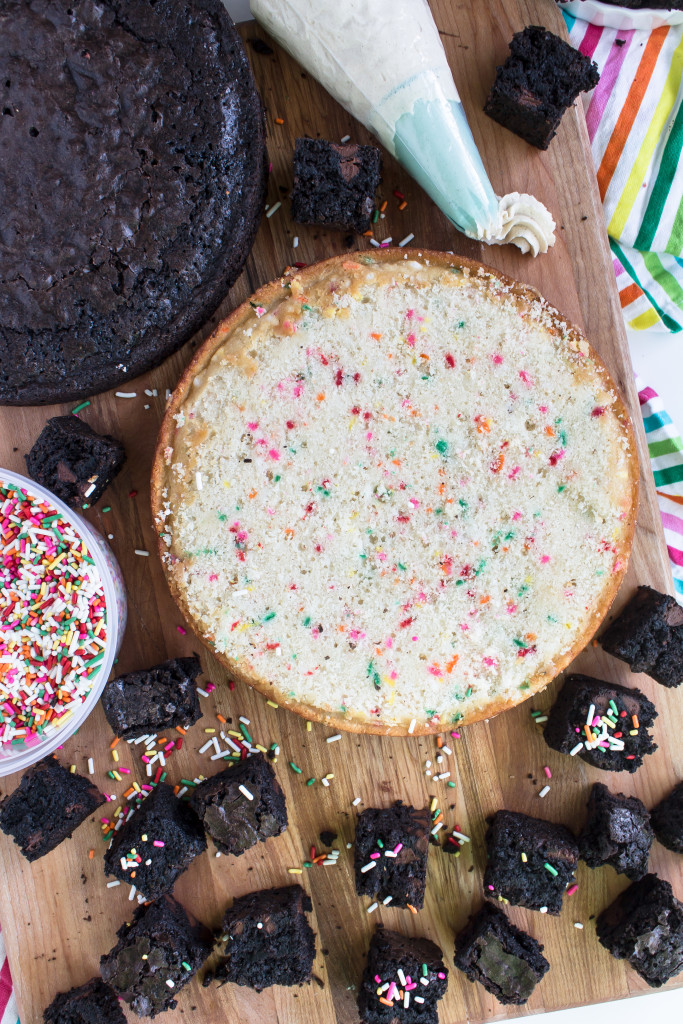 It’s party time over here with this pretty cake. My brother’s birthday was last week and when I was brainstorming cake ideas this fun concoction came to mind. I wanted something over-the-top, with lots of colors that exudes fun. I think it was a success. I have been on the lookout for an opportunity to make Molly Yeh’s highly acclaimed homemade funfetti cake, and this seemed like the perfect time. What really makes this cake taste like the nostalgic boxed cakes from childhood days is the imitation vanilla. It is still great with pure vanilla extract, but as we learned from Momofuku Milk Bar, the imitation vanilla makes it a true 10-year-old-birthday-party funfetti flavored cake. 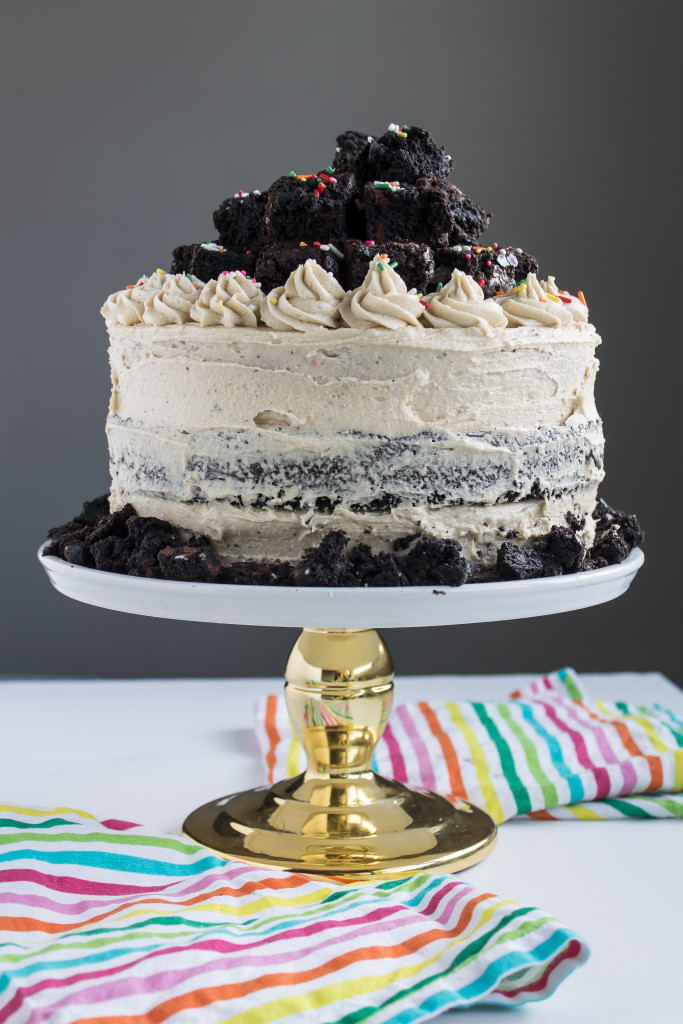 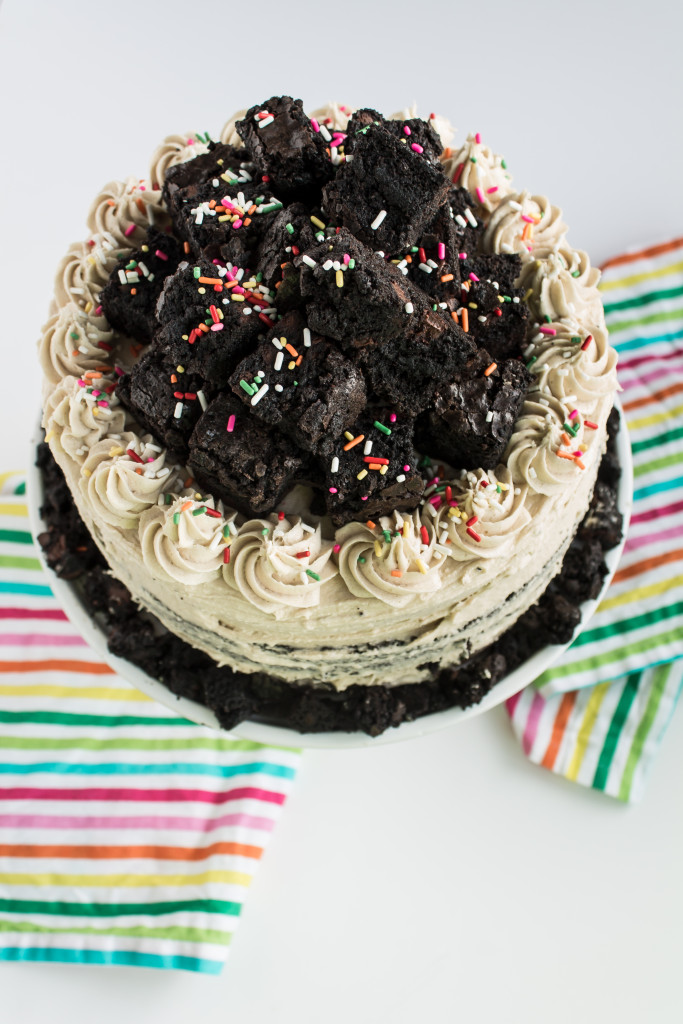 Every time I look at this cake it makes me smile. There is something about sprinkles, funfetti and utter indulgence that is so fun. I didn’t realize until I was taking photos of this cake that I seem to have an affinity for sprinkle-filled over-the-top cakes. While they look similar, these two cakes actually taste very different. The brownie layer and cookie dough frosting are crucial to making this cake as great as it is. The cake layers aren’t that sweet by themselves, but the brownies and frosting make up for that. Homemade brownies are one of my all-time favorite desserts (if you haven’t made them, please put down the box and do it! You won’t regret it!). When I was trying to decide how to make the cake more unique, I immediately thought about these dark dark homemade brownies. They are perfectly moist and chewy and support the structure of the cake so well. 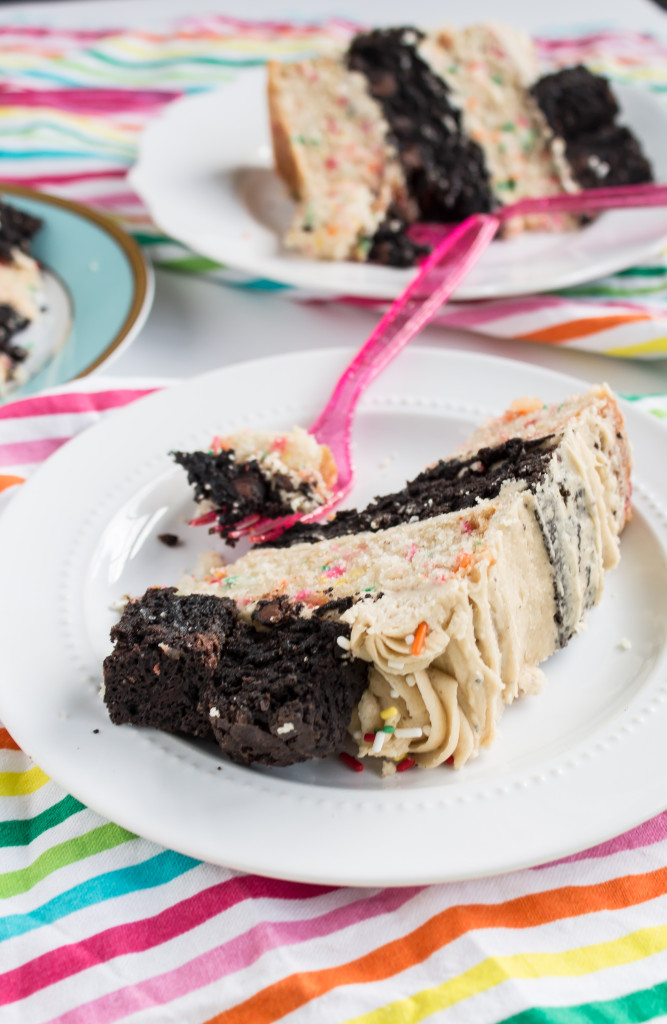 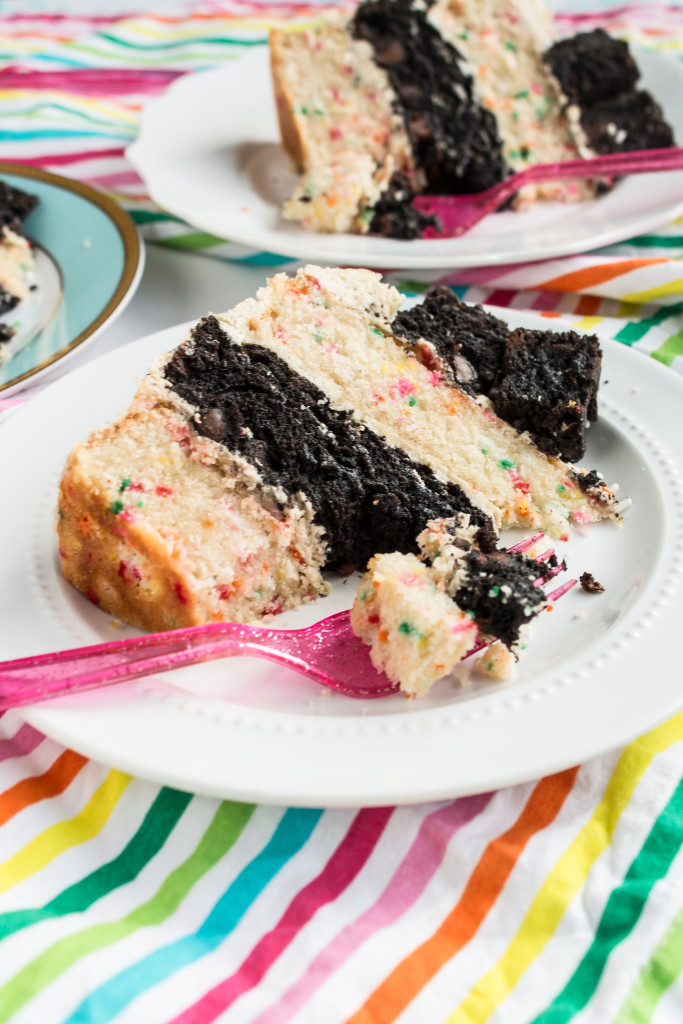 I also contemplated the best way to top this cake, and originally wanted to make my own version of “Drake on Cake” with a different color icing, but after making the different layers and the frosting that seemed like an unnecessary step that would dirty more bowls than this cake required. So the brownie topping was slightly out of the idea that it would look delicious on a cake plate, and slightly out of pure laziness. Two thumbs up for extra brownies and no more dishes. 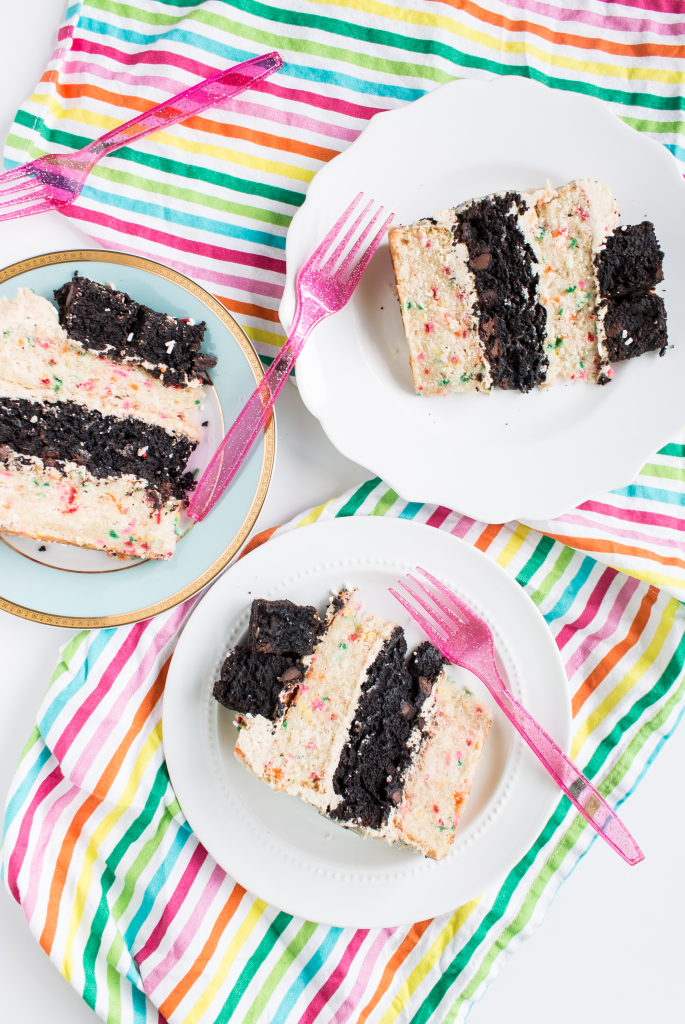 This funfetti brownie cake with cookie dough frosting is such a fun and delicious combination for any age.  The more sprinkles the better ;)

*this makes enough frosting for between the layers, swirls on top, and a tiny tiny bit for the outside. You can double it to make enough to cover the outside of the cake, but the whole combination is very sweet already so it isn’t necessary to have more icing on the side of the cake.

To make the Funfetti Cake
Preheat the oven to 350 degrees F. Line two 8-inch cake pan with circles of parchment paper, and lightly spray with nonstick cooking spray. Set aside.

In the bowl of an electric mixer, cream together the butter and sugar until light and fluffy. Add the egg whites, one at a time, mixing well after each addition. Add in the vanilla and oil and mix.

In a medium bowl, mix the flour, baking flour and salt. With your mixer running on low, alternate adding the flour mixture and the milk into the butter mixture in three additions, beginning and ending with the dry ingredients. Mix until the batter is smooth. Fold in the sprinkles.

Divide the batter evenly between the two prepared pans and bake about 30-45 minutes, or until a toothpick inserted into the center comes out clean. Let the cake cool for 10-15 minutes in the pans then remove them from the pans and transfer them to a wire cooling rack to cool completely.

To make the Brownies
Preheat the oven to 325 degrees F. Line two 8-inch cake pans with circles of parchment paper, lightly spray with nonstick cooking spray, and dust with flour. Set aside.

In a medium bowl, stir together the flour, cocoa powder and salt. Set aside.

In the bowl of an electric mixer, cream together the eggs, sugar, butter and vanilla until well blended. Add the flour mixture to the butter mixture and mix just until all of the dry ingredients are moistened. Do not over mix. Fold in the chocolate chips.

Divide the batter evenly between your prepared pans and bake for 35-45 minutes, or until a toothpick inserted into the center of the brownies comes out clean. Let the brownie layer cool for about 30 minutes before removing it from the pan, then transfer it to a wire cooling rack and let it cool completely.

To make the Cookie Dough Frosting
In the bowl of an electric mixer fitted with a paddle attachment, beat together the butter and brown sugar until light, creamy and fluffy. Add the powdered sugar and beat again until smooth. Beat in the flour and salt. Add the milk and vanilla and mix until the frosting is well blended and smooth.