It was a sad ending to the weekend and the Super Bowl with a Panthers loss. Fortunately, we have Mardi Gras and these individual king cake cinnamon buns to look forward to on Tuesday! 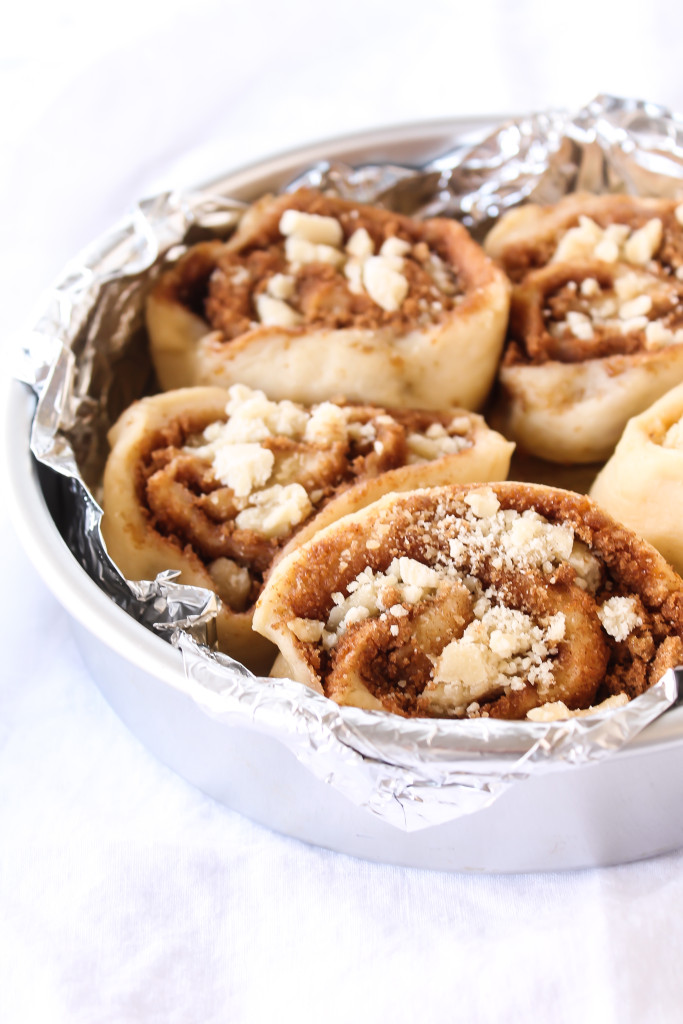 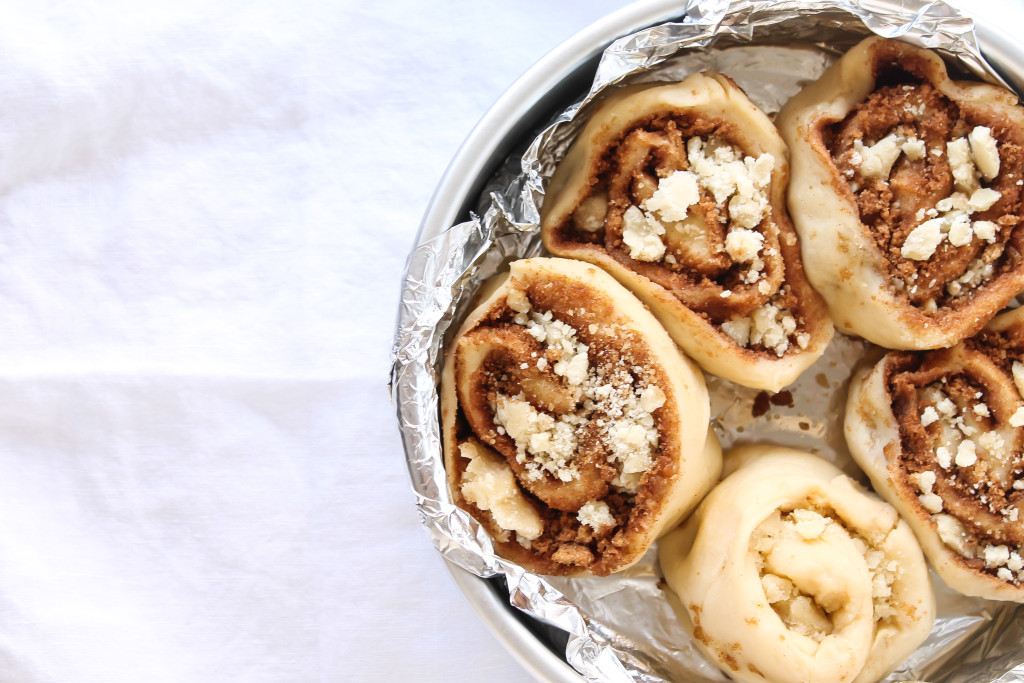 I have never been to New Orleans, but it is on my list of places to visit, and hopefully sometime soon.  All through middle school, high school and one semester of college I took French.  In addition to the language and grammar, my teachers always did a good job of teaching us about the culture of France, French colonies, and French cultures around the world.  We learned about the French rule of New Orleans and the French culture that still remains a huge part of the city, and each spring our high school French club would plan a Mardi Gras, or “Fat Tuesday,” party, complete with king cake.  I don’t know where the king cake came from but one of the class moms would contribute one to our celebration. 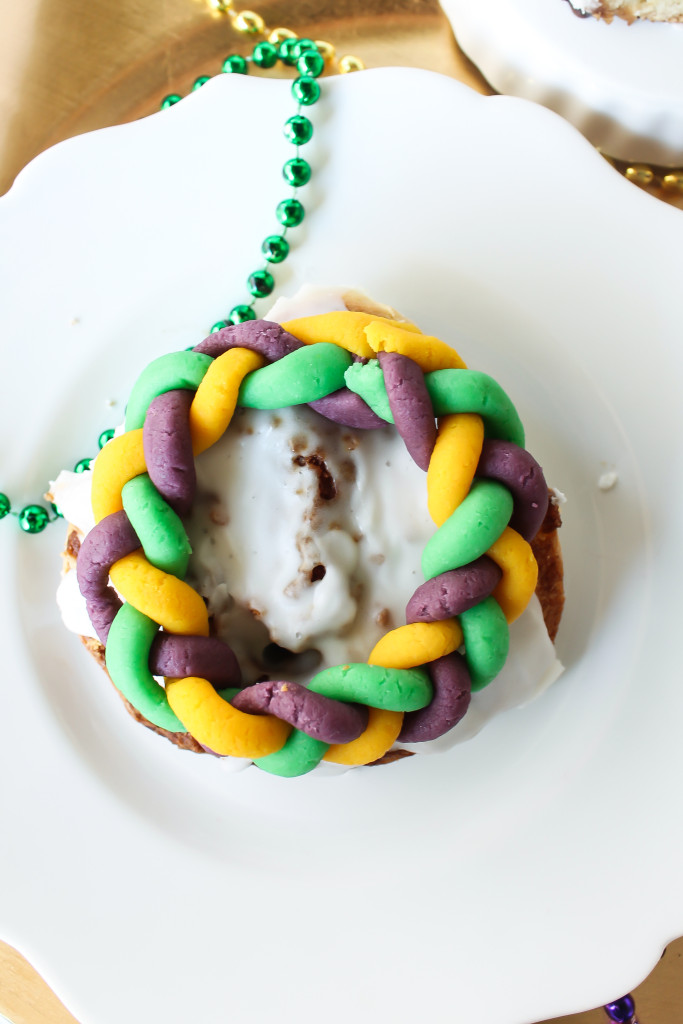 The cakes of my French club days were always dry and only had a tiny bit of flavor between the thick layers of arid bread.  The colored sugar was fun, but could get messy quickly with lots of high schoolers reaching for their slice.  While the traditional king cake incorporates more lemon, I decided to recreate king cake as I imagine it should be, with doughy brioche-like sweet bread, layers of cinnamon and almond paste, a creamy glaze and a festive marzipan braid to top it all off! 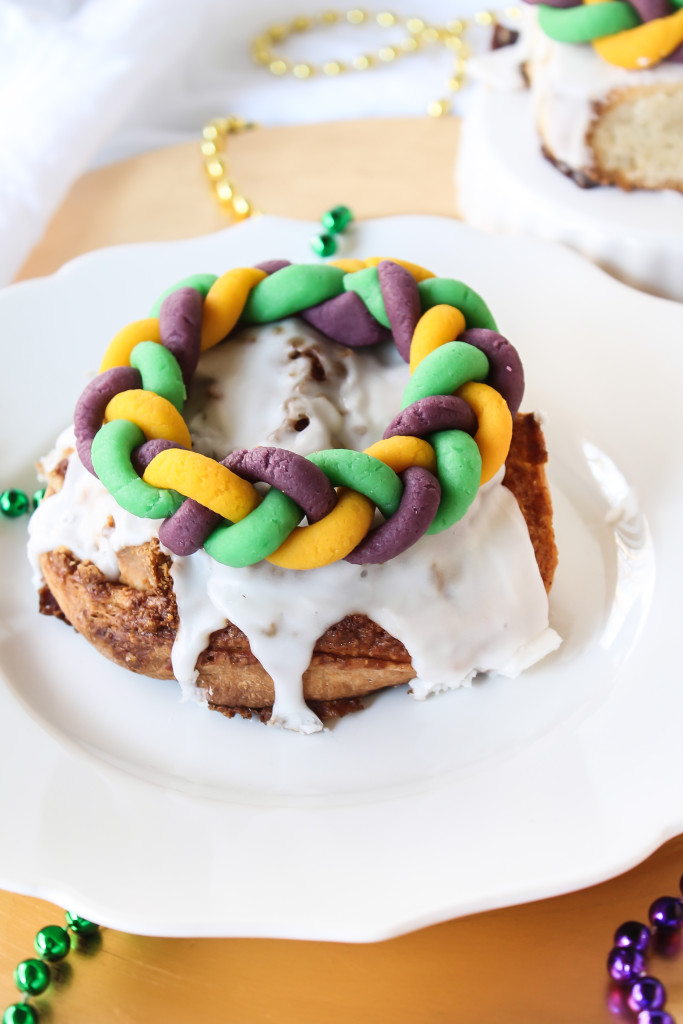 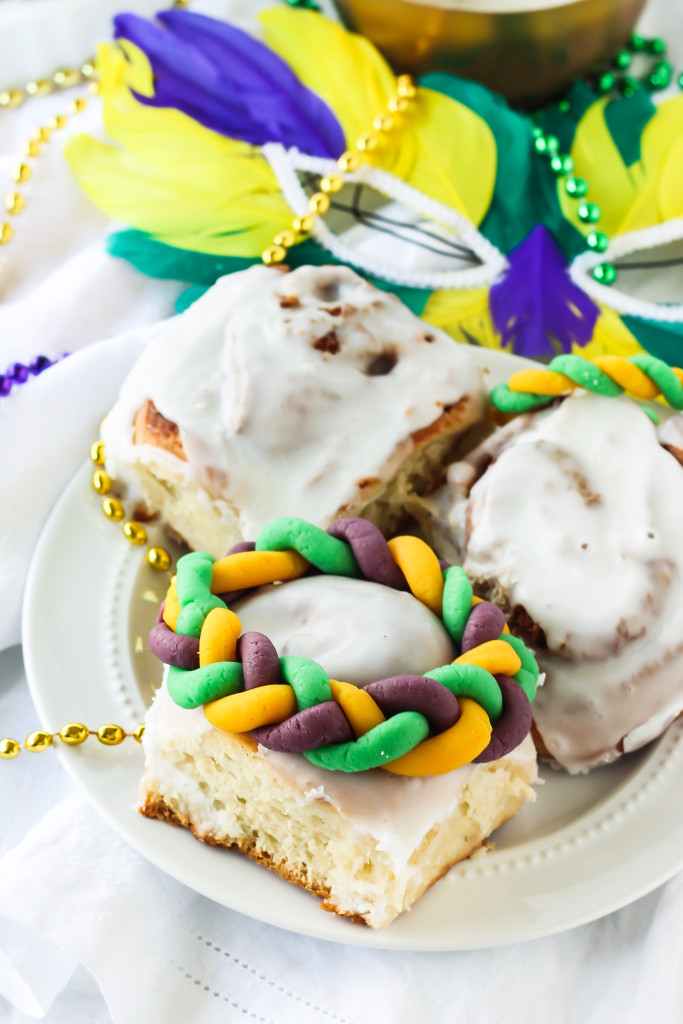 Now here I am telling you I have never been to New Orleans but you should make these baby king cake cinnamon buns, what kind of hypocrisy is that?  I know, I know, but I did retain a bit of my French club knowledge about the holiday, so maybe I can use that to up my king cake cred?  King cakes are said to represent the Epiphany, the day the three kings (or Magi) visited baby Jesus.  A small plastic baby figure is commonly hidden in the king cake to represent baby Jesus during this celebration, and now symbolizes luck to the person who finds the figurine in their slice. 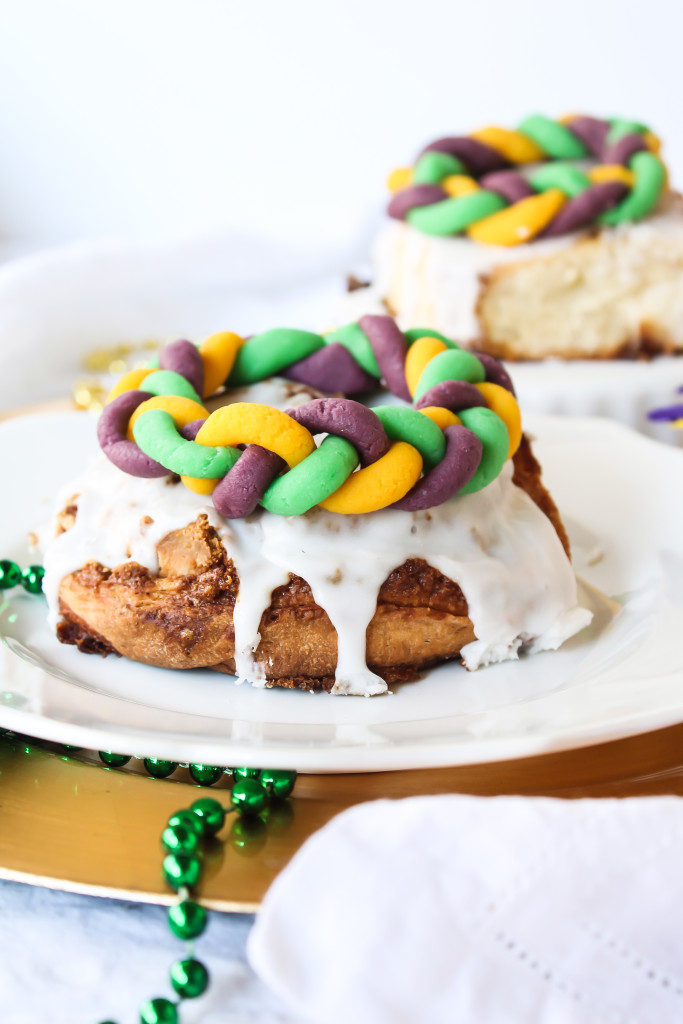 The king cake was a piece of French culture brought to the Gulf Coast by French colonists and the traditional tri-colored sugar topping represents the three kings, each color with a different meaning.  We use purple to represent justice, green for faith, and gold for power.  I braided colored marzipan to top the king cakes, as a twist on the typical sanding sugar and I love how it pairs with the sweet and tangy almond glaze and the almond paste hidden inside the buns.  And instead of cutting into one circular cake, each person gets their own circle of cake with king cake cinnamon buns. 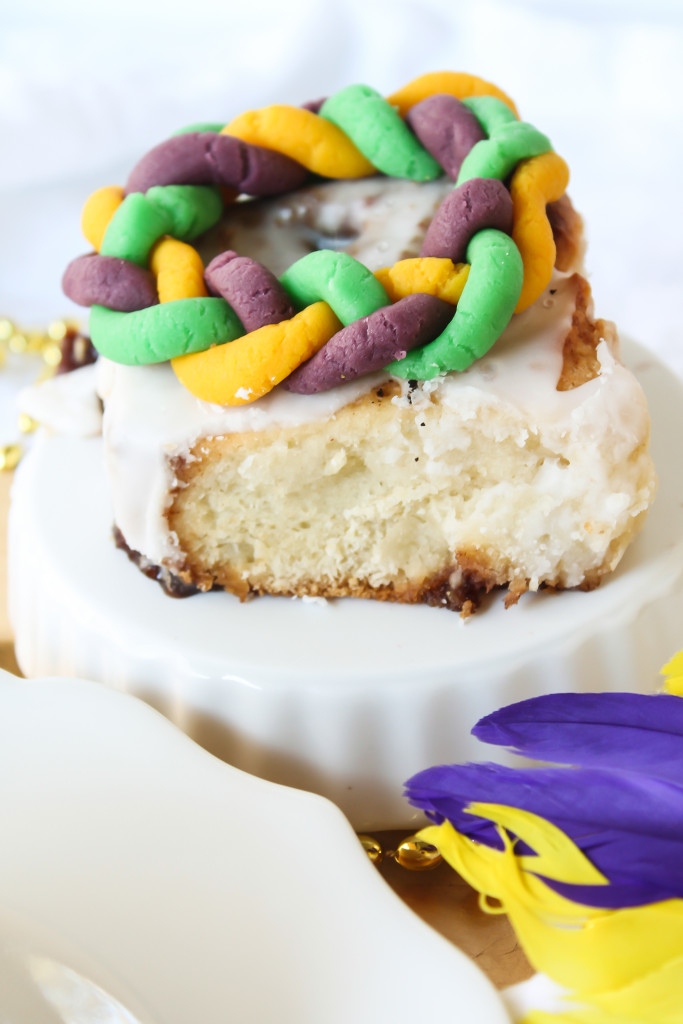 To make the dough:
Line two 8 or 9 inch cake pans with aluminum foil. Push the foil into the bottom edges and up the sides of the pan. Make sure the foil is flush with the pan and fold excess foil over the edges of the pan. Spray foil-lined pans with non-stick cooking spray.

Move one oven rack to the middle of the oven and one to the bottom and place a loaf pan on the bottom rack.

In a small bowl, whisk milk and yeast together until the yeast dissolves. Whisk in eggs.

In a stand mixer fitted with the dough hook, mix flour, cornstarch, sugar and salt on low speed until combined. Add the warm milk mixture in a steady stream and mix until the dough comes together, about 1 minute. Increase the mixer speed to medium and add butter, 1 tablespoon at a time, until fully incorporated. Continue to mix the dough until it is smooth and pulls away from the sides of the bowl (about 10 minutes). If the dough is still wet and sticky, add up to ¼ cup of flour, 1 tablespoon at a time, until it releases from the bowl. Transfer the dough to a lightly floured surface and knead a bit to form a smooth, round ball of dough. Spray a medium bowl with nonstick cooking spray and transfer the dough to the greased bowl. Cover the bowl with plastic wrap and transfer to the middle rack of the oven. Pour 3 cups of boiling water into the loaf pan at the bottom of the oven, close the oven door, and let dough rise until it has doubled in size, about 2 hours.

To make the filling:
In a small bowl, combine the sugar, cinnamon and salt.

Remove dough from the oven and move it to a lightly floured surface. Roll the dough into an 18×18 inch square and spread the butter over the dough, leaving ½ inch border around the edges. Sprinkle the sugar mixture evenly over the dough and lightly press it into the dough. Break the almond paste into small bits and sprinkle them evenly across the dough.  Beginning with the edge closest to you, roll the dough over itself into a tight cylinder. When you get to the end of the dough, pinch lightly to seal the seam. Cut the dough into 10 equal pieces and transfer 5 pieces to each prepared pan, cut sides up. Cover the pans with plastic wrap and let them rise in the oven until doubled in size again, about 1 hour.

To make the glaze:
While the king cake cinnamon buns are baking, make the glaze. In a small bowl, combine powdered sugar, melted butter, lemon juice and almond extract. Stir in 2 tablespoons of milk. Continue to add milk 1 teaspoon at a time until the mixture becomes a spreadable consistency.

Remove the buns from the oven and preheat it to 350 degrees F. Remove the plastic wrap and bake buns until they are just golden and the filling is melted, about 30-40 minutes. Place the pans on a wire rack, top buns with glaze and let cool for 30 minutes. Lift the foil from the pans to remove the buns and top each with remaining glaze.

Roll each colored piece into a thin cylindrical strip. You may have to make multiple strips, as the marzipan sometimes breaks if you roll too long of a piece. Carefully braid the three colors together, circle the braid on top of a cinnamon bun, break off the marzipan at the end of the circle, and pinch the ends of the braids together.

If you would rather skip the marzipan, sprinkle yellow, green and purple sanding sugar on top of each for an easier, more traditional miniature king cake look.