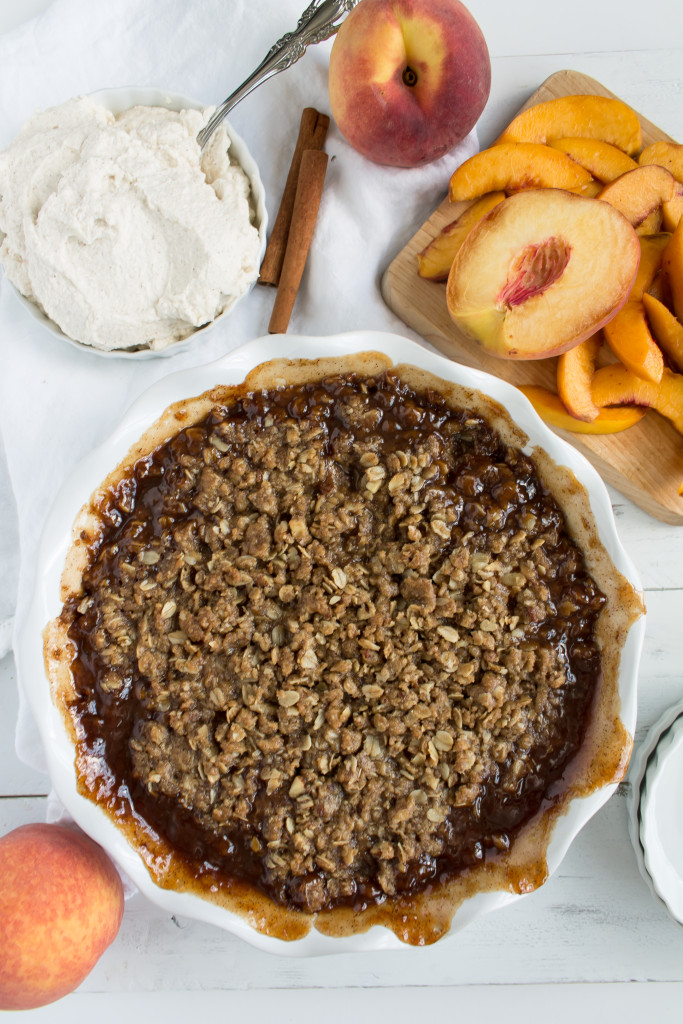 Happy Labor Day! It is always funny to me that most people use Labor Day to mark the end of summer, when in North Carolina we still have weeks of heat left. I love love love fall and all of the coziness, layers, blankets and pumpkins that it brings, but I do want to soak in the last of the fresh summer fruits and veggies as much as I can before they are gone. That’s where this spiced peach crisp comes into the picture. 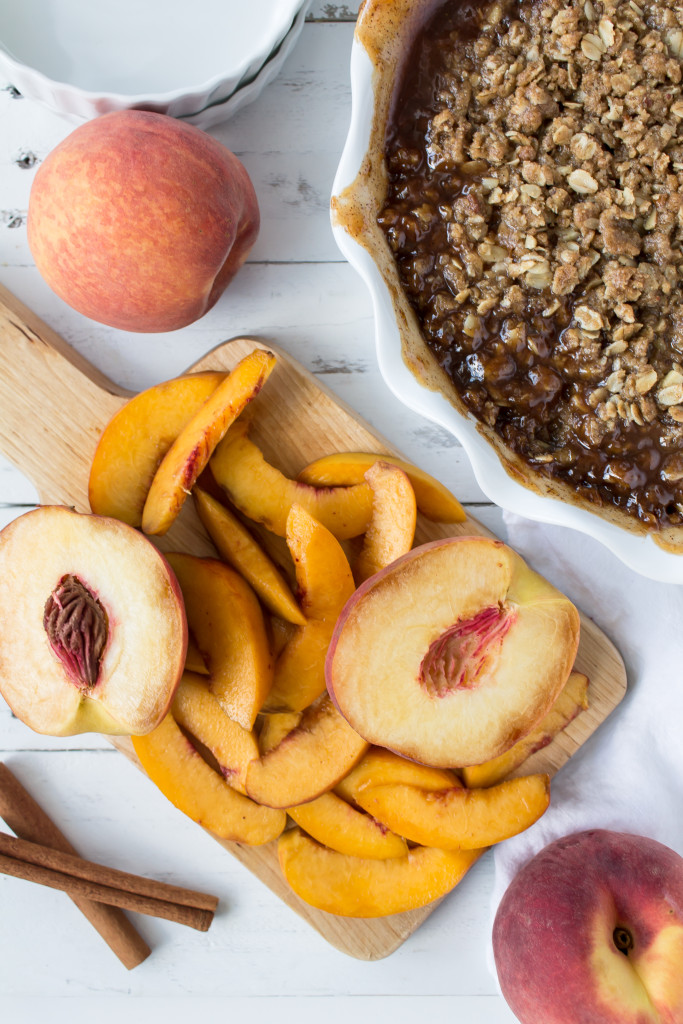 The whole time I was making and trying to think of a name for this dessert I kept going back and forth. Is it a crisp or a crumble? Would people think of it as a cobbler? I knew traditional cobblers had biscuit topping, but what was the difference between all of these fruity desserts?Cobbler, crisp, crumble, slump, buckle – there are so many names for them! Never fear, I’ll break it down for you: 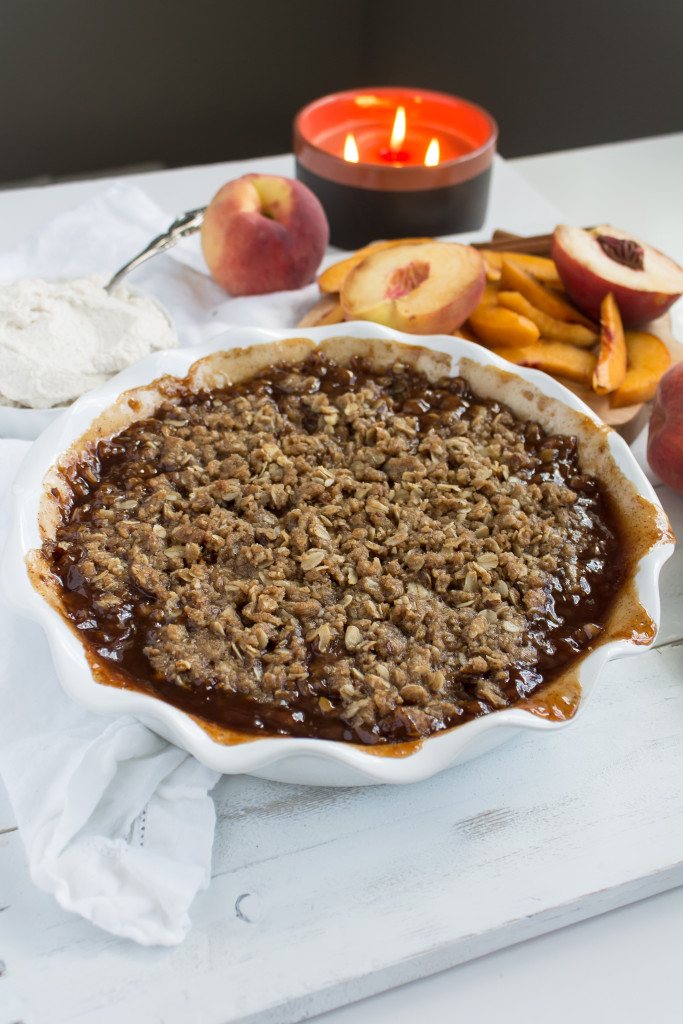 This peach crisp (and yes, it is a crisp, according to the traditional definition), is filled with cinnamon, ginger, and so many other spices, bridging the gap between summer and fall just like Labor Day weekend does so well. The fresh summer fruit gets cooked with fall spices and spiced crumble to create the perfect, easy end-of-summer dessert that you can throw together in no time. I had only seen crisps with spices added into the topping, but not usually the filling and the topping. This one has spices in both the filling and the topping and there is no better way to do it. You’ll never go back to topping spices only after this peach crisp. 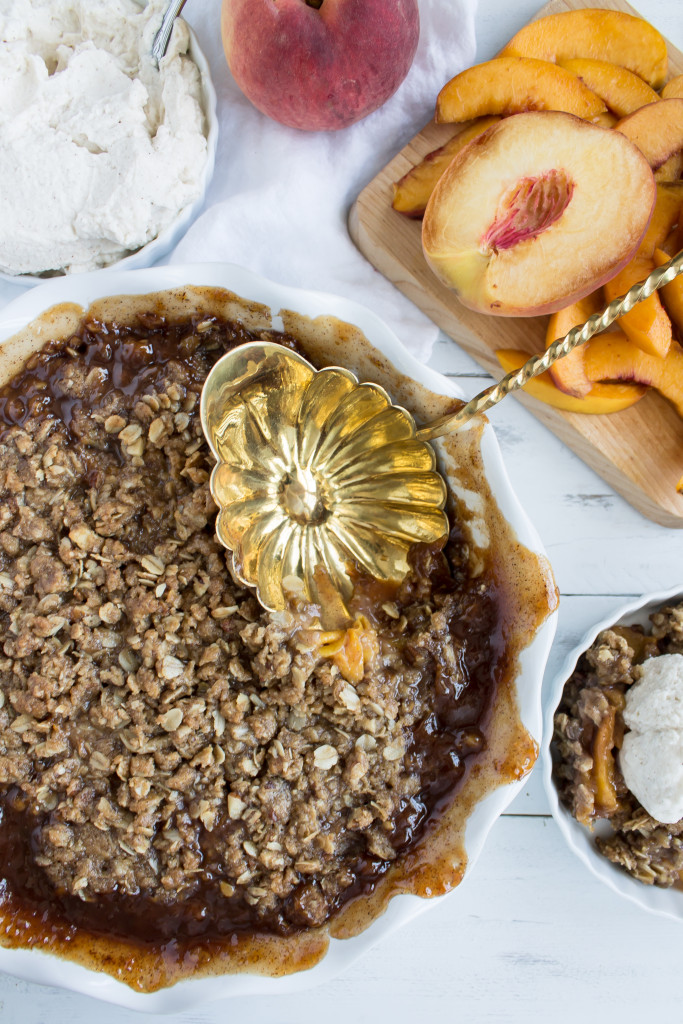 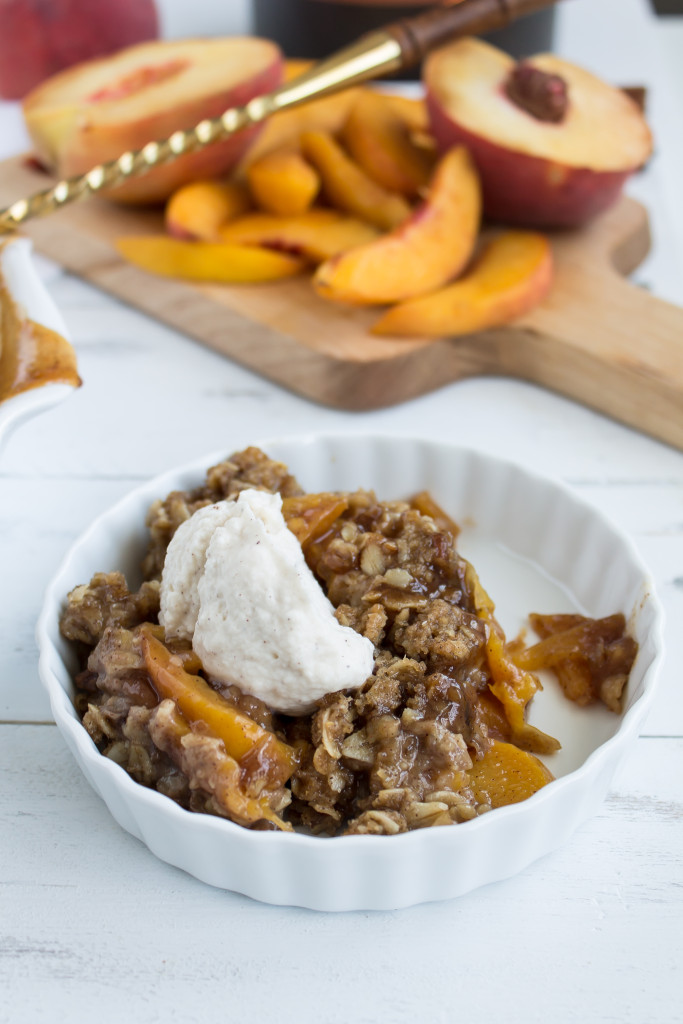 Preheat the oven to 350 degrees F. Grease a 8 to 9-inch pie dish or pan (circle or square) and set aside. (If you use an 8” pan, place a baking pan under it, in case there are any drips)

To make the filling:
In a large bowl, combine peaches with the flour, sugar, salt and vanilla. Stir gently to combine. Spoon the mixture evenly into your prepared baking dish.

To make the topping:
In a medium bowl, whisk together the brown sugar, flour, oats, cinnamon, salt and pecans. You want to get rid of any brown sugar lumps in the mixture. Add the butter and blend into the dry ingredients with your hands. The butter should be fully incorporated but the mixture will still be crumbly. Sprinkle the topping evenly over the peaches.

Bake the crumble topped peaches for about 40 minutes. If you used a 9-inch pan, check the crisp around 30 minutes, since the thinner spread dessert will cook faster than it will in an 8-inch pan. The topping will be golden brown and the peach juice will bubble up on the edges. Once the crisp is done, place it on a wire rack to cool slightly before serving. Serve it warm, room temperature or cold with cinnamon whipped cream and/or ice cream! The leftovers will store in the fridge for about five days (if they last that long).

To make the cinnamon whipped cream
In the bowl of a mixer, whisk together the whipping cream until soft peaks form. Add in the vanilla, sugar, and cinnamon and whisk again. Taste and add more cinnamon and/or sugar to taste. Continue to whip it until stiff peaks form.