Happy Thanksgiving week! The big week of gratitude and feasting is in full swing, with turkeys thawing, tables decorated, and family traveling from near and far. You probably have your menu ready to go and your groceries prepped, but this pumpkin pie cake with cinnamon cream cheese frosting is well worth adding to the dessert spread. 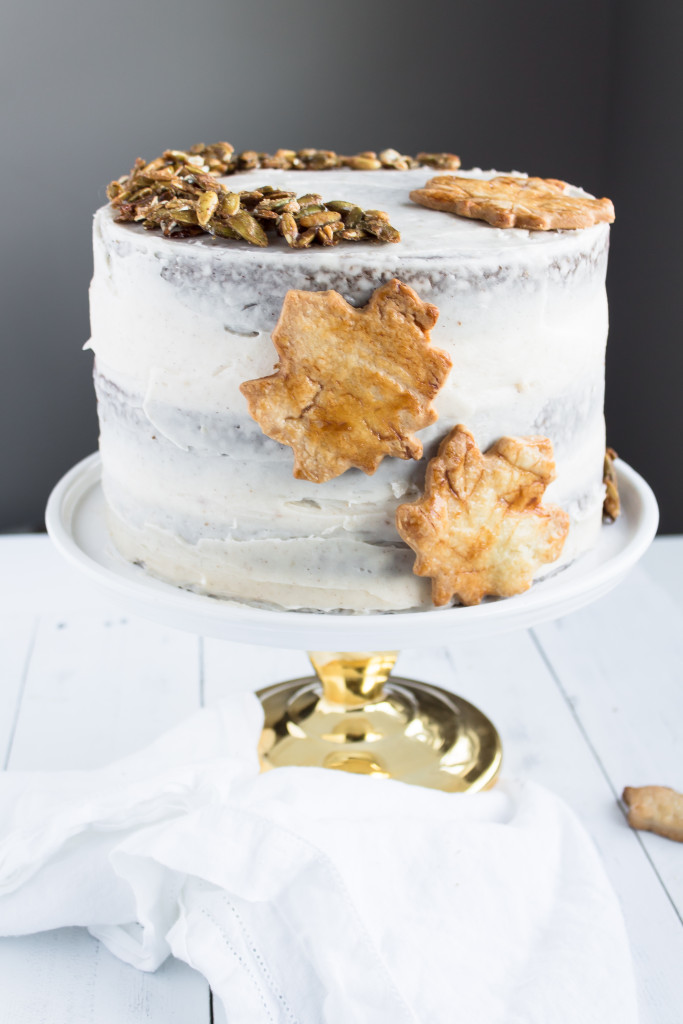 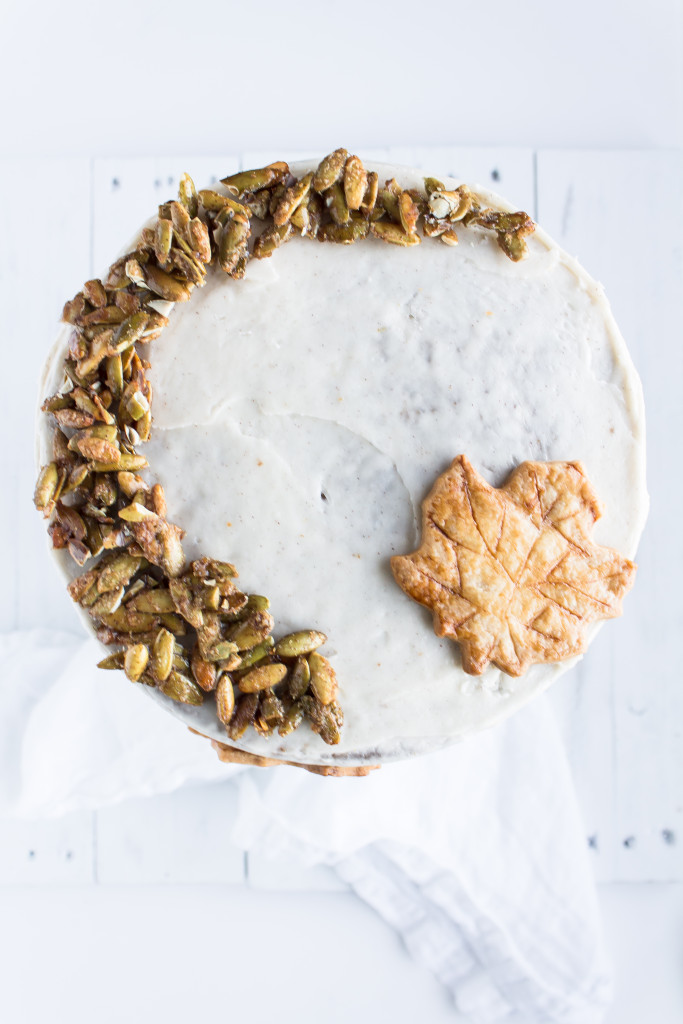 I am so excited to share this cake with you. The idea is based off of Momofuku Milk Bar cakes, with their multiple layers and components that combine to make a delicious, unique cake. The flavors of this cake meld together better than I even imagined and the different parts can all be made ahead of time, so you can get started today and have it ready for turkey day without stressing. 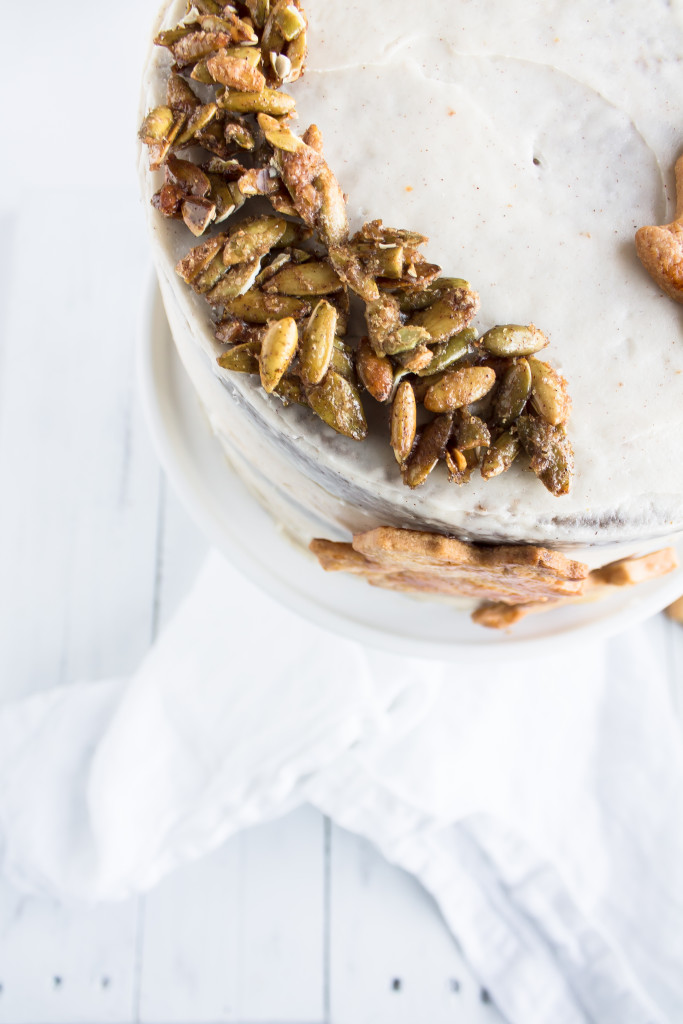 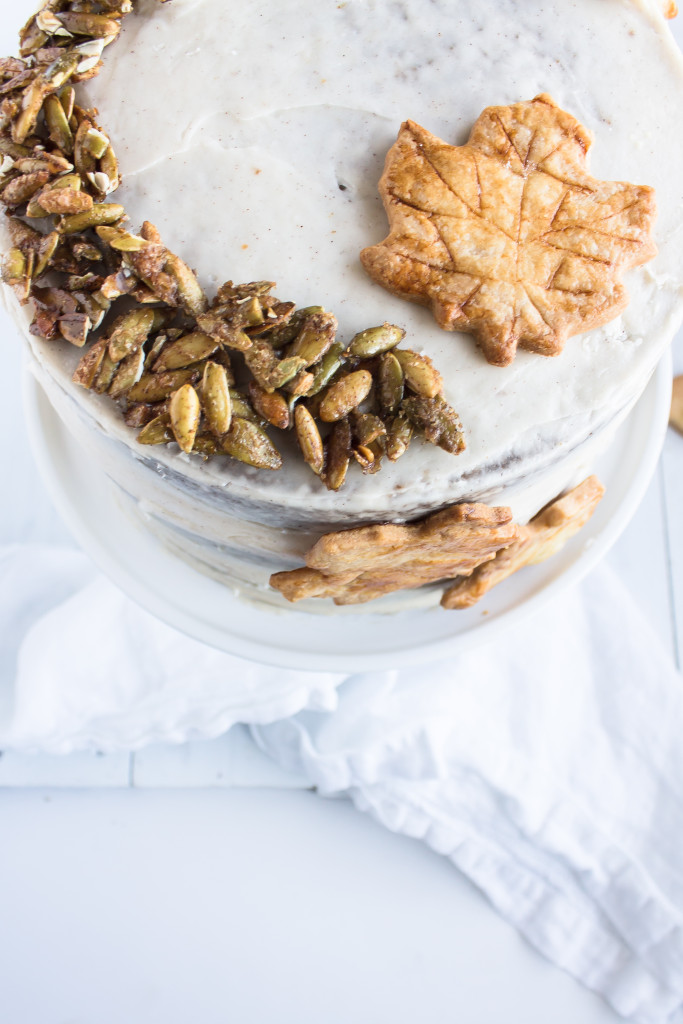 I wanted this pumpkin pie cake to emulate the tastes and nostalgia of traditional pumpkin pie, but in a fun new form. Shortbread bites rest in the cinnamon cream cheese frosting between each layer of pumpkin cake to mimic the classic flavor of pie crust. Maple candied pumpkin seeds and pie crust cookies sit on the top and sides of the almost naked cake as beautiful, tasty garnishes. The garnishes are optional, of course, but they are so easy and will instantly impress your family and friends.

The pumpkin cake is so moist and stays soft for days, even after cutting into it. It is not too sweet, which makes it pair perfectly with the cinnamon cream cheese frosting and shortbread bites, but it can still hold it’s own amidst the pies and crisps that grace the Thanksgiving table. I am not a big fan of cake, and usually pick pies or cookies over cakes when given the option, but I love this cake and the combination of ingredients. I definitely ate more slices than I am proud to divulge. 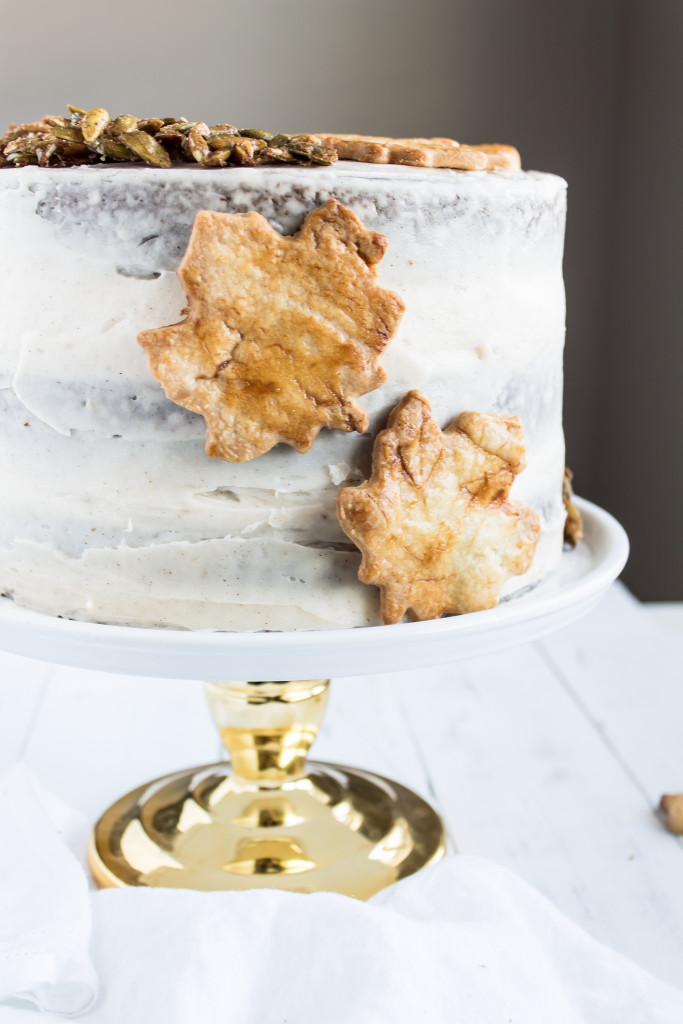 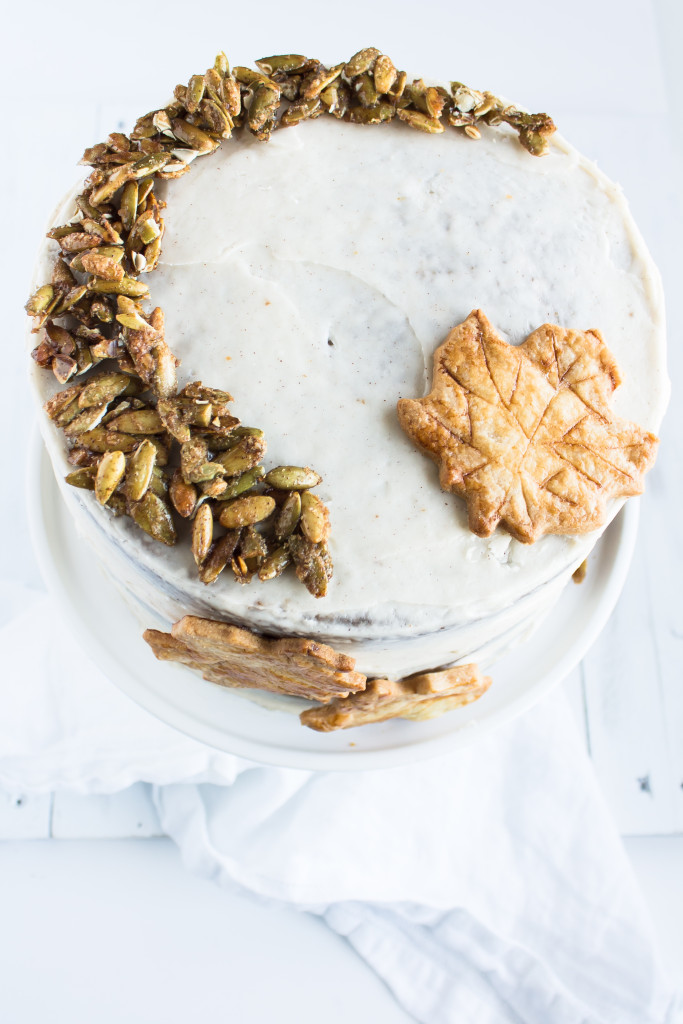 Pumpkin cake with cinnamon cream cheese frosting is the perfect way to end your Thanksgiving meal and impress your family and friends this week. It is easier than it looks, and absolutely delicious.

To Make the Pumpkin Cake
Preheat the oven to 325 degrees F. Butter 3 8-inch round cake pans, then line the bottom with a circle of parchment paper and butter that as well. You can also use non-stick cooking spray for this step.

In a large bowl, whisk together the flour, baking powder, baking soda, cinnamon, nutmeg, and cloves. Set aside.

In a stand mixer, combine the pumpkin, oil, sugar and salt. With the mixer on medium speed, add the egg yolks one at a time, making sure each yolk is fully incorporated (or almost fully incorporated) before adding the next. Scrape down the sides of the bowl when you are done.

With the mixer on low speed, add the flour mixture, just until the ingredients are incorporated. Do not over mix. Pour your batter into the bowl you just used for the dry ingredients (or into another large bowl) and set aside.

In the now semi-clean bowl of your mixer, whisk the egg whites until they are frothy and white. They will still be fairly liquidy, not fully whipped. Fold the frothy egg whites into the cake batter until they are no longer visible (but be careful not to over mix). Pour the cake batter into the pan and bake on the middle rack in the oven, with enough room for it to rise.

Begin checking the cakes after 35 minutes (mine have taken anywhere between 35-50 minutes), removing them when a toothpick or thin knife inserted into the center of the cake comes out clean. The middle will set and cook a little longer from the heat of the pan as the cake cools. Let the cake cool in its pan on a wire rack for at least 20 minutes, or until the cake is pulling away from the pan. Transfer the cake onto a wire rack to cool completely before frosting.

You can make this cake ahead of time! After it cools, wrap it well in plastic wrap and refrigerate for a few days, or freeze for a few weeks. If you freeze the layers, let them thaw in the fridge before frosting them.

To Make the Cinnamon Cream Cheese Frosting
In the bowl of your stand mixer, use the paddle attachment to beat together the butter and cream cheese until smooth. Gradually add the powdered sugar and beat until the mixture is smooth again. Add the cinnamon and beat to fully incorporate. Continue beating until the frosting reaches a consistency you like. It will get softer as you beat.

The frosting can be made ahead of time and stored in an airtight container in the fridge until you need to use it. Bring it back to room temperature before using it, or zap it in the microwave for 10 seconds at a time, mixing it between each reheat.

To Make the Shortbread Bites
Preheat the oven to 325 degrees F (this is the same temperature that the cakes are baking in, so this can be done at the same time).

In a large bowl, combine the flour, powdered sugar, baking powder and salt. Add the butter and work the ingredients together with your hands. The mixture should easily form a ball of dough. Break the dough into small balls and pieces, about the size of marbles, and place the dough on a baking sheet. Bake for 10-15 minutes. If the shortbread bites seem too doughy, add another 5 minutes (the baking time will depend on the size of your dough balls – mine took about 15 minutes to bake).

Let the shortbread bites cool before assembling the cake.

To Make Pie Crust Garnish (optional)
Roll out your pie dough onto a well floured surface, cut with cookie cutters or pie crust cutters, and bake it for only a few minutes according to the temperature on your pie crust package or your pie crust recipe (this one is my go-to). I cut my pie crust with small to medium sized cookie cutters and they didn’t bake longer than 5-8 minutes before they were done.

If you want a pie crust piece that looks like it is hanging over the edge of your cake, spray the outside of a ramekin or a cake pan with non-stick cooking spray, place a pie dough cut-out on the sprayed edge, so it looks like it is hanging off of the edge of the ramekin or pan, as you would want it to look on the cake. Place the ramekin or cake pan on a baking sheet and bake with the rest of your pie crust pieces. Let it cool before carefully removing it and placing it on your frosted cake.

To Assemble
Make sure the cake and frosting are at room temperature and the shortbread bites, maple candied pumpkin seeds and pie crust cookies (if using) are cooled before assembling.

Place the pie crust around the top and sides of the cake as you like. Again, there is no wrong way to do this; it is all up to your preference.

Serve with a smile, relish the complements and enjoy! 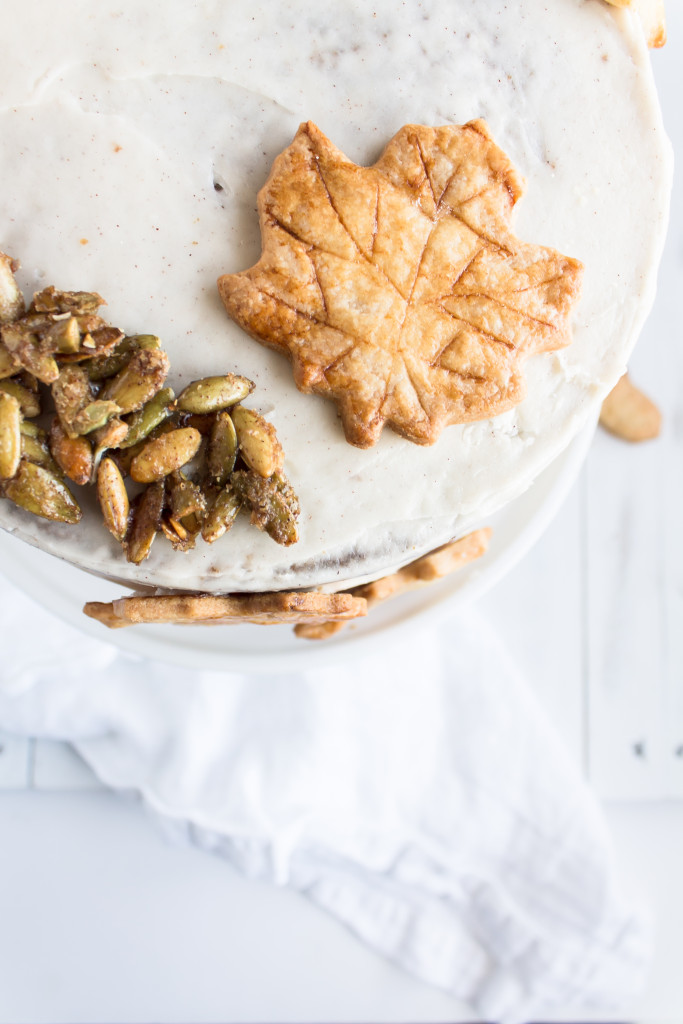 Recipe inspired by Momofuku Milk Bar and adapted from Food52