Welcome to the last installment of this year’s brain tumor trip.  We packed a lot into our three-day weekend in New York (see parts I, II and III). On our second day we first went to the World Trade Center and the 9/11 Memorial. While our trip was about a month ago, it seems fitting to post the 9/11 Memorial and One World Trade now, around the release of the PBS story of 9/11 at the Pentagon and the 15th anniversary of September 11, 2001. It is hard to believe 15 years have already passed since that terrible day in history, every year I remember it so vividly, and likely still not as vividly as many who were older than I was at the time. 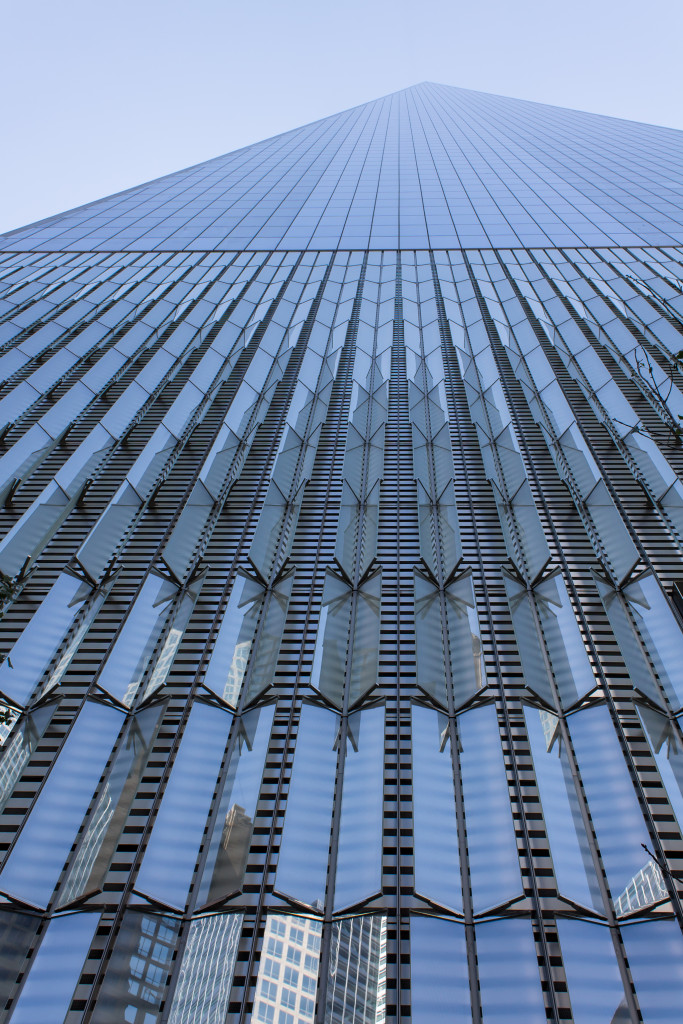 The memorial was deeply moving and, while there were many people surrounding the fountains, it was still quiet and solemn. The scale of the memorial surprised me. I wasn’t expecting each fountain to be so large and deep (they are each about an acre in size).  I definitely recommend stopping by if you are in that part of the city. As my family stood around the memorial, we talked about our memories from the day. Will, my sister and I were in elementary school, and my brother was even younger, so the way we each experienced the day varied and was much different than how our parents experienced it. 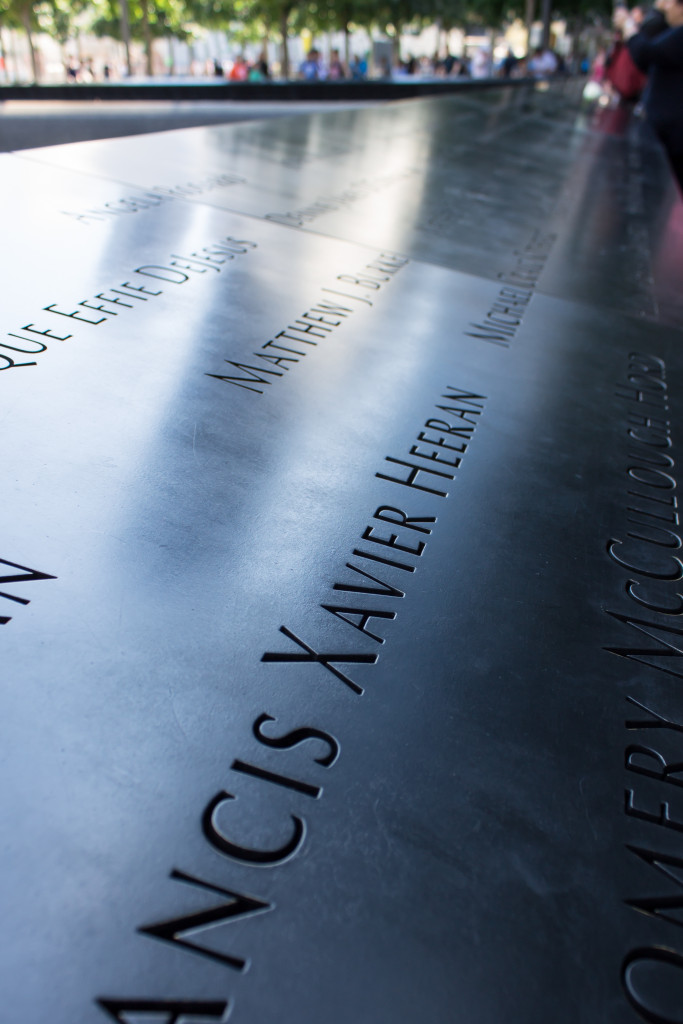 My dad’s business partner (our great family friend) and a few people in his company were in the Pentagon when the plane hit. After the evacuation, they returned to the still burning building, cutting wires and cords to hook up a computer command station while the events were unfolding. As water poured into the flaming building, they helped get the computers back up and running for the army within 24 hours of the crash. My dad explained how he waited to hear that each person in the company was accounted for and safe, but cell service was nonexistent because everyone in the country was trying to get in touch with their family and friends.

As an elementary schooler, I remember the day being different from a regular day, but I didn’t know what had happened until later. Our teachers were notified as someone came to the classroom door to speak to them, but they were not allowed to turn on the tv or tell us about it. My dad picked me up at the bus stop, which was unusual for him. After learning about the events I understood what had happened as much as anyone could, but as a child there were so many things I didn’t know about on that day. I can’t imagine the stress and fear of the unknown that my parents experienced as adults who were trying to make sure friends and family were safe, but not knowing what was going to happen next or where it might occur. Sharing all of our memories and experiences made the memorial even more meaningful. 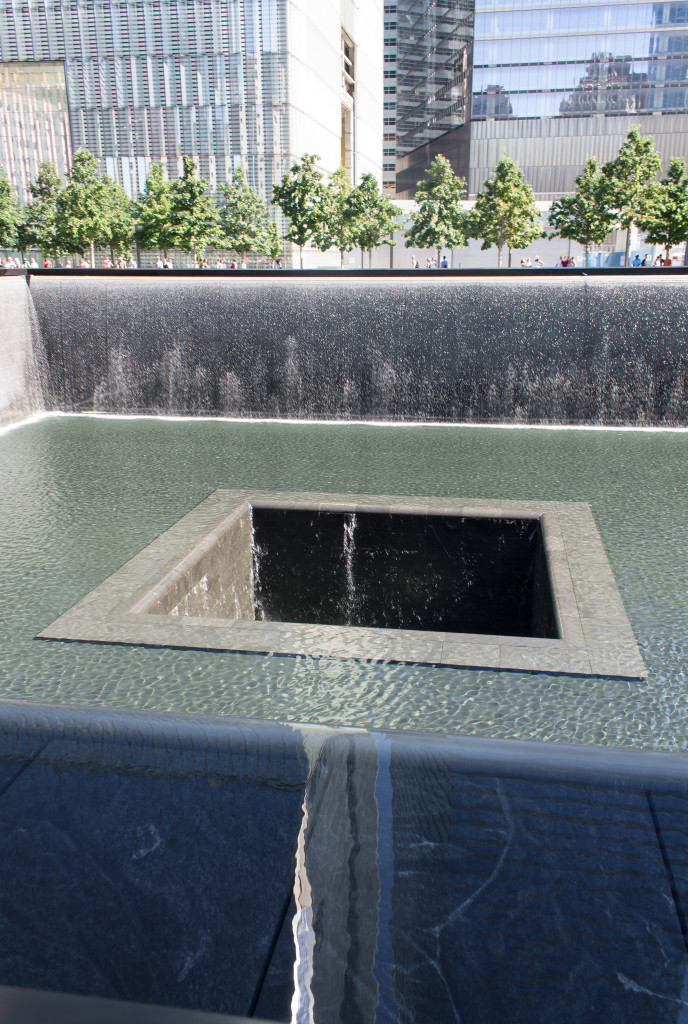 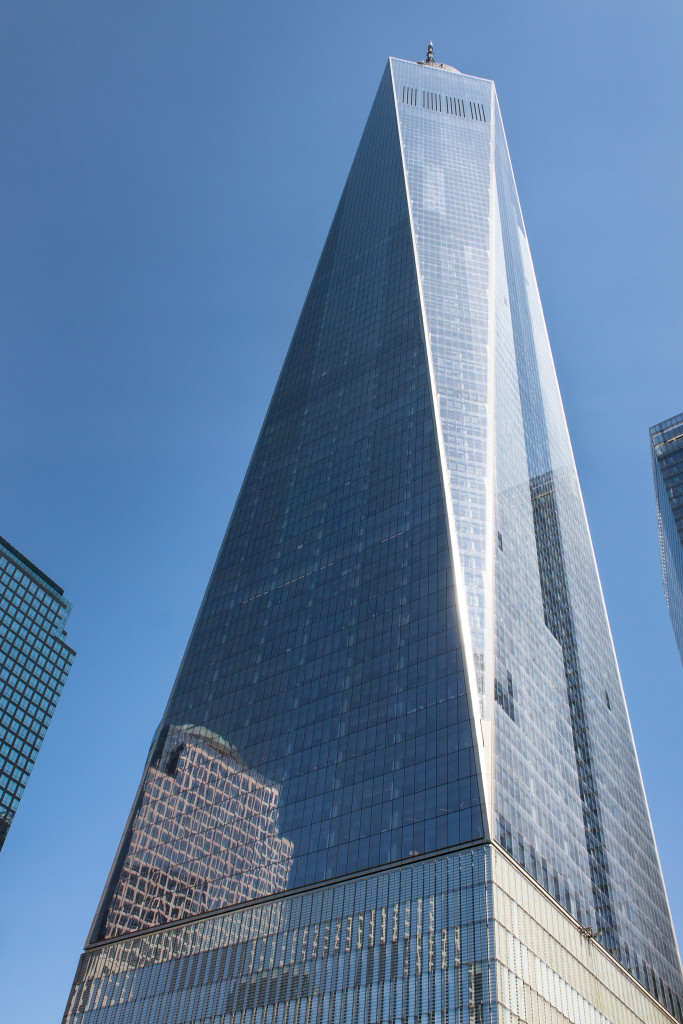 On a happier note, we also walked along the High Line and through Chelsea Market during our visit to New York. I think the High Line is so interesting and such a cool idea. If you haven’t heard of it, the High Line is a “linear park” built on a section of inactive elevated train tracks. They have done a great job maintaining the park, incorporating interesting architectural elements and creating a lush green space in the middle of (and above) a bustling, dirty city. 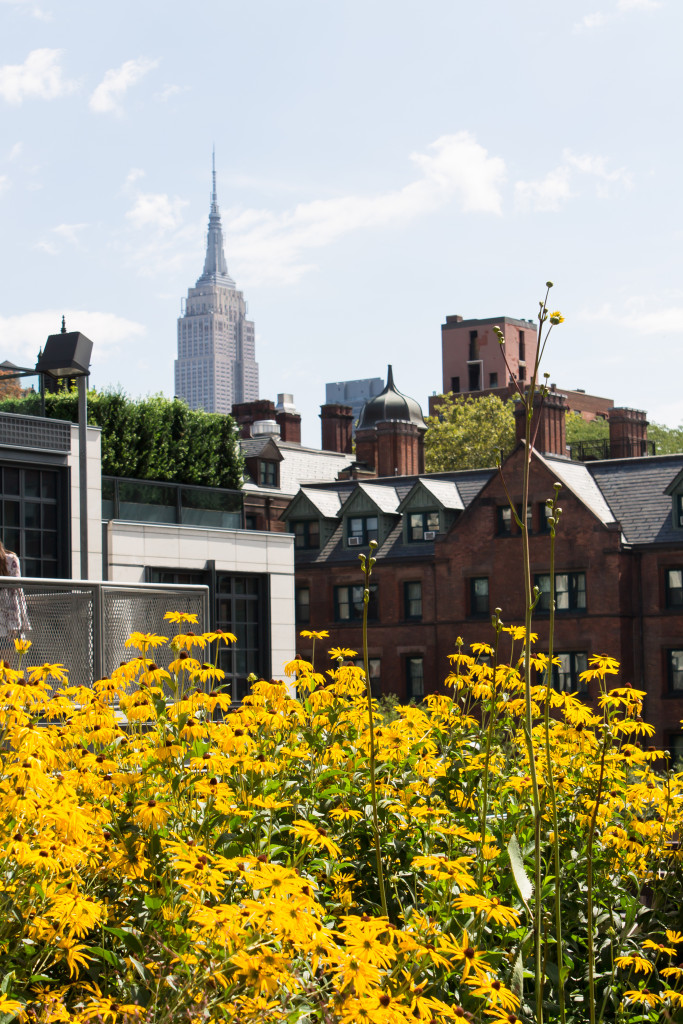 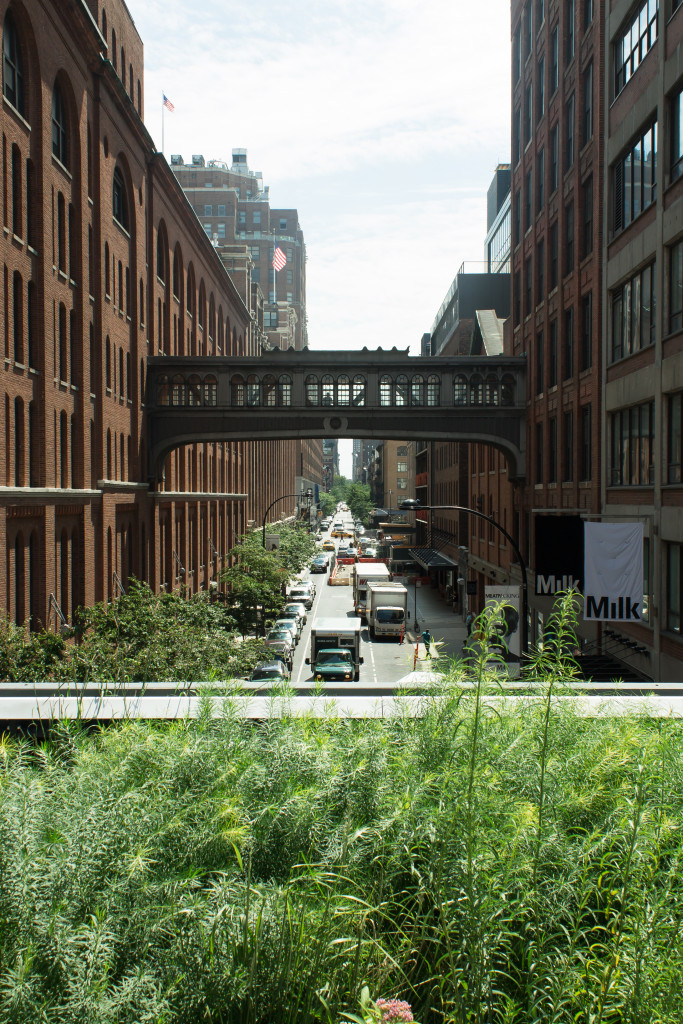 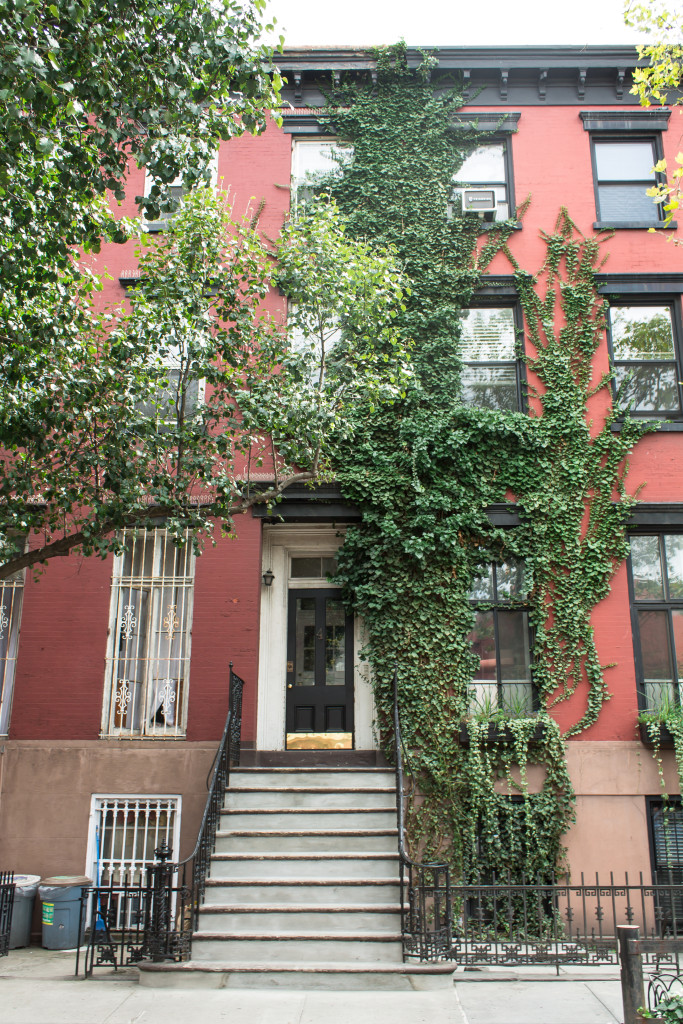 One of the afternoons we were in the city we walked around the Village (above) and stopped in an adorable coffee shop (I want to imitate all of their décor!), called Bluestone Lane for a pick-me-up. In addition to the great pillows, marble tables and relaxing décor, the teas and coffees were served in a unique and beautiful way. The chai tea and the tea lattes came with their own supplies so you could pour your milk, spices, sugar or honey to your liking, and the iced coffee was served in a glass that was the shape of a can of soda. Everything was cute, delicious and so wonderful. It was the perfect break in our day. Pardon the iPhone shots of the iced coffee and chai tea latte set-up.  They were just too lovely not to document, especially with all that marble – I couldn’t resist (much to the chagrin of my family). 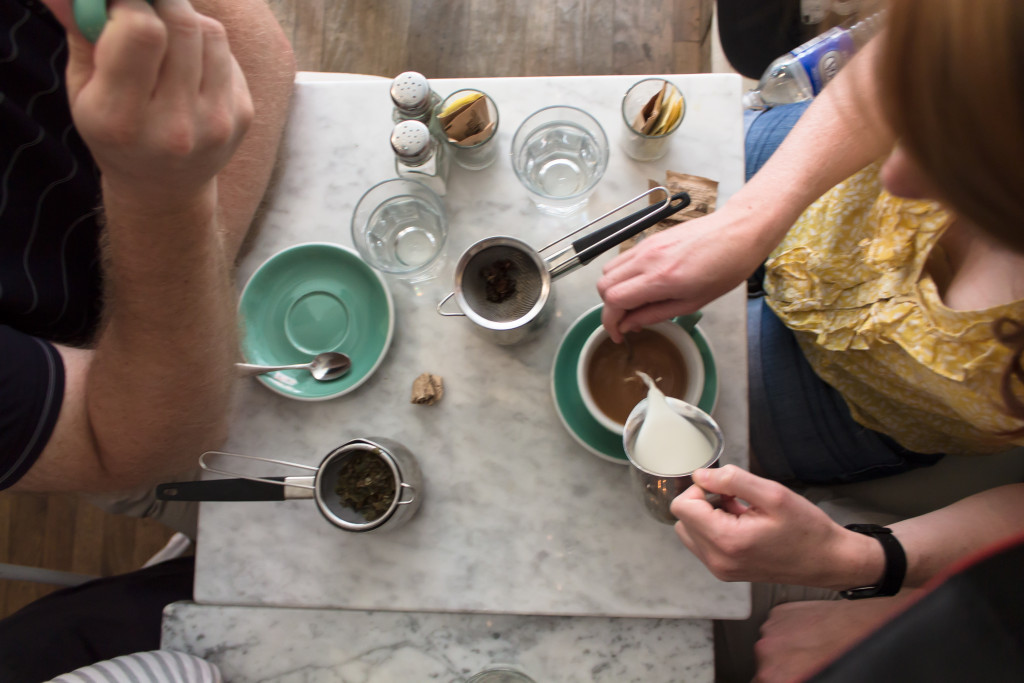 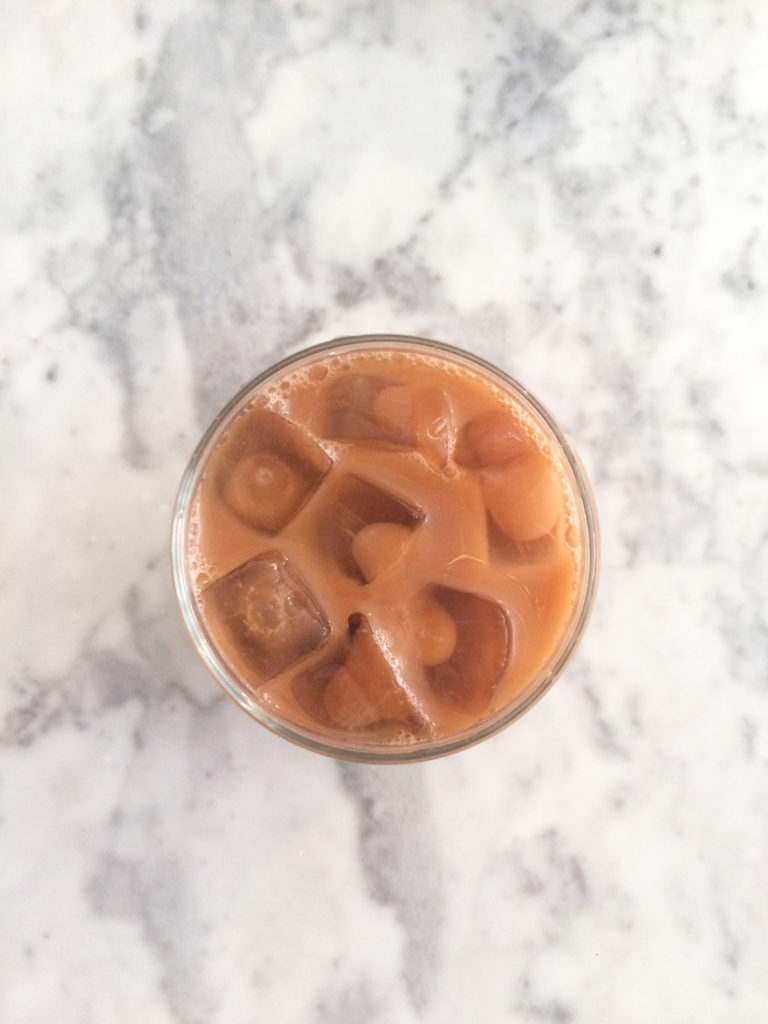 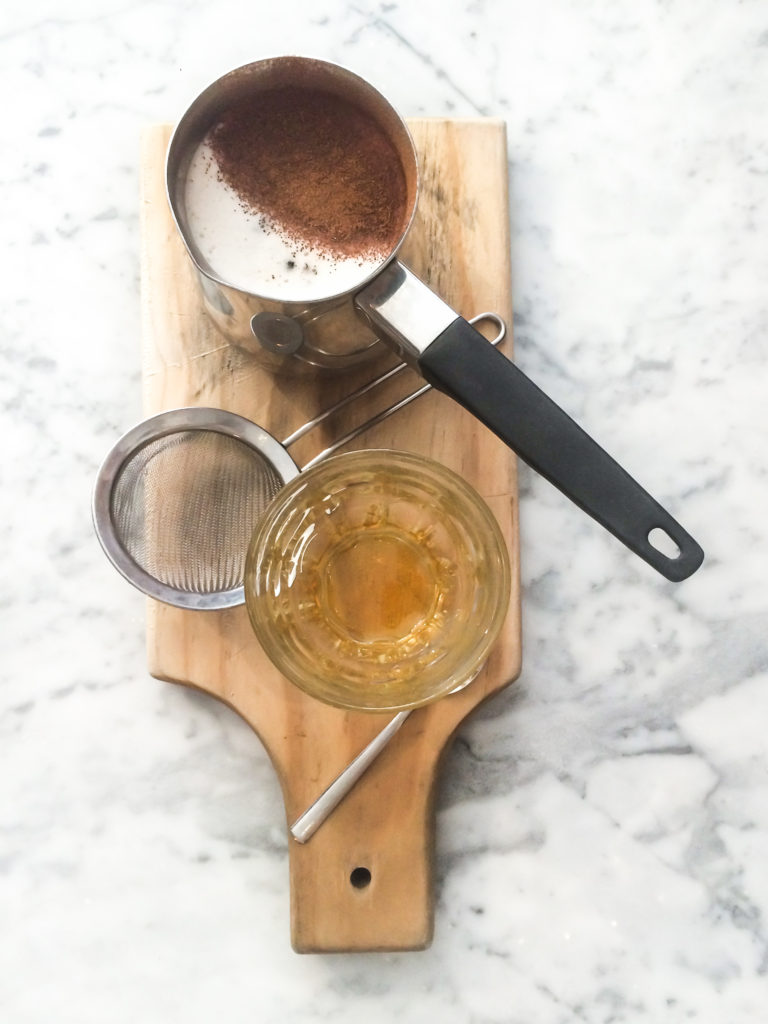 Last but not least, we stopped by the Lincoln Center on our way back to our Airbnb on the last day. We didn’t see anything while we were there, but just stopped to look around the grounds and admire the complex. I think it is so cool that Lincoln Center and Juilliard share a campus and have their own subway station below the plaza. I imagine the students at Juilliard walking out of their practice rooms and dorm buildings right over to the famous performance halls, and jumping on the subway under their feet if they ever need to run an errand. That is probably way more idyllic than the life of a Juilliard student, but I can imagine, right? 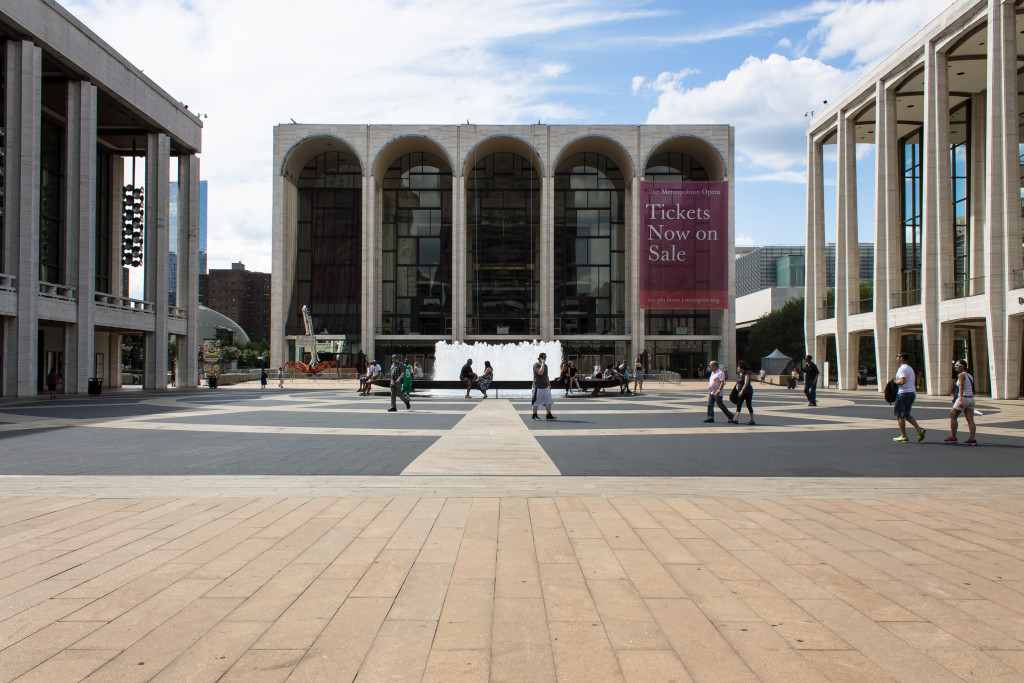 There is so much to do, see and try in New York City. Every time I go I see more and gain a larger appreciation for the city. I still don’t know that I would ever want to live on Manhattan, but the city grows on me every time I visit, making me want to come back to explore even more neighborhoods and boroughs. I’m so lucky, blessed and glad to have a healthy family to visit new cities and celebrate life on this brain tumor trip.  Now to figure out where we will go next :)  Any suggestions?

Last day (night) of intern year -> first day of in