It’s been a while, but I’m back! At the beginning of December, Will and I took a week-long trip to the Northeast for his residency interviews. His last day of interviews for the week was in New York City, so I took the day to walk around and see the city decked out for Christmas. NYC is one of my favorite cities to wander around, and while I have visited in the summer, fall, and late winter (February), I had never seen it adorned with Christmas decorations. If you love Christmas as much as I do, it is definitely worth seeing NYC at Christmas time at least once. It is magical! 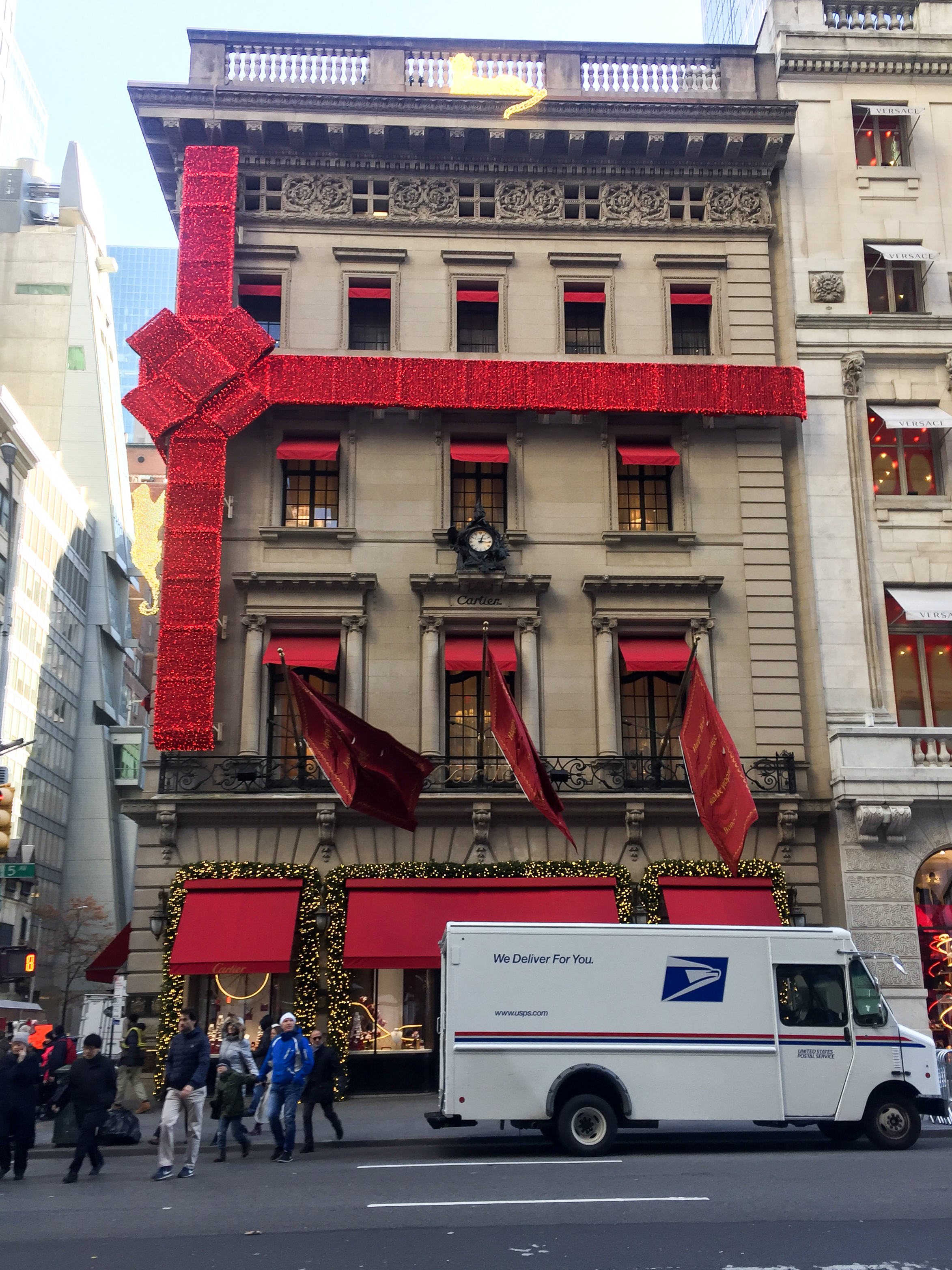 My only goal for the day was to snack on delicious treats, see lots of Christmas trees, and browse the windows on Fifth Avenue. I mapped out a general walking path before I went, but left time to explore other areas if I had time. My plan was to grab a pastry and hot chocolate from a coffee shop or bakery and walk through the city in search of all of the Christmas trees and Christmas markets in the parks and squares on my way up 5th Avenue, briefly hop into Central Park, one of my favorite spots in New York City, to see the ice skaters against the city skyline, then mosey through Columbus Circle and Lincoln Square before heading up the Upper West Side for a Levain cookie and views of the decorated brownstones. I walked 11+ miles from 8:00 am to 2:30 pm, ate some amazing baked goods, and saw so much Christmas spirit in the city. It was my ideal day. 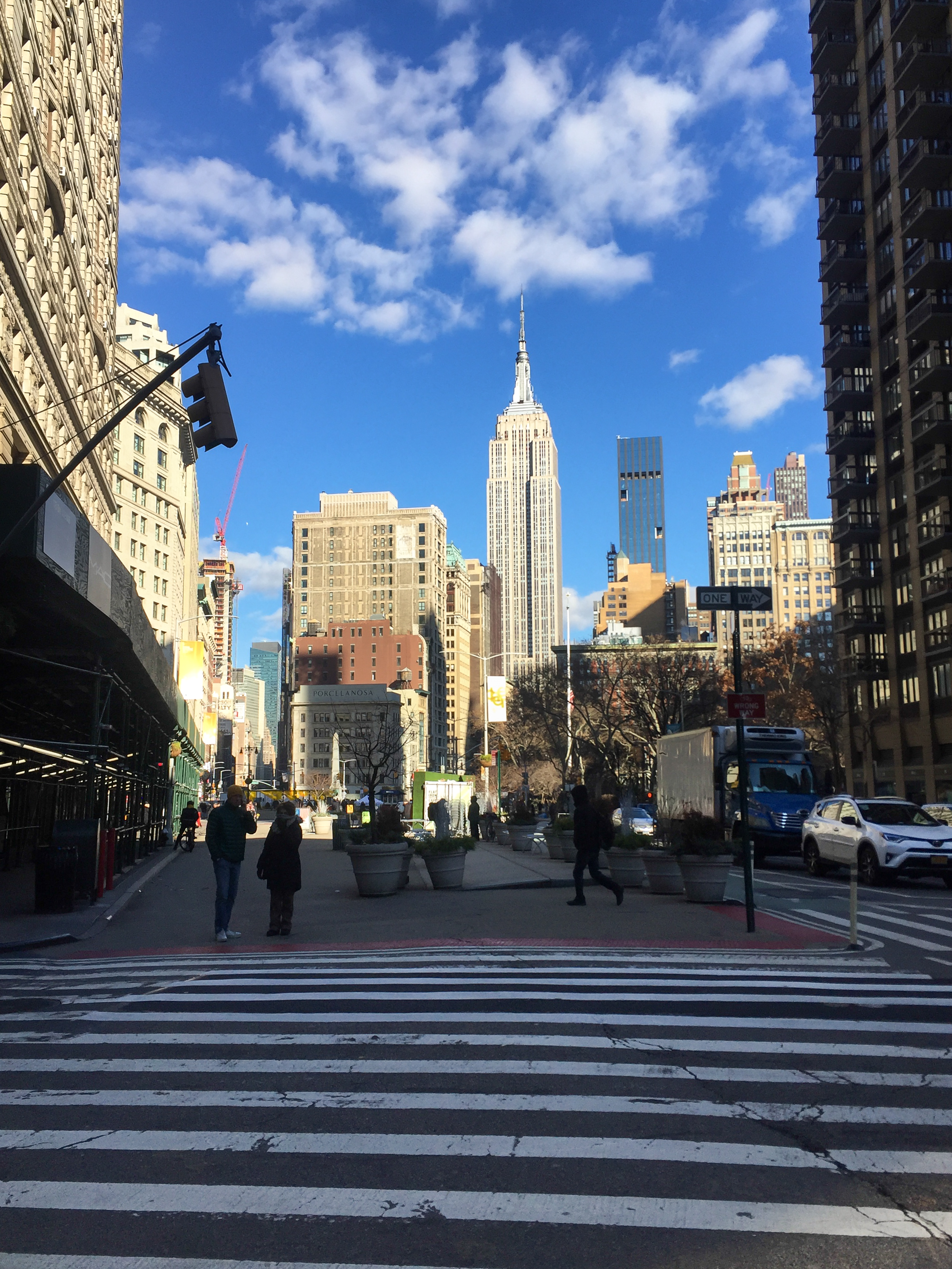 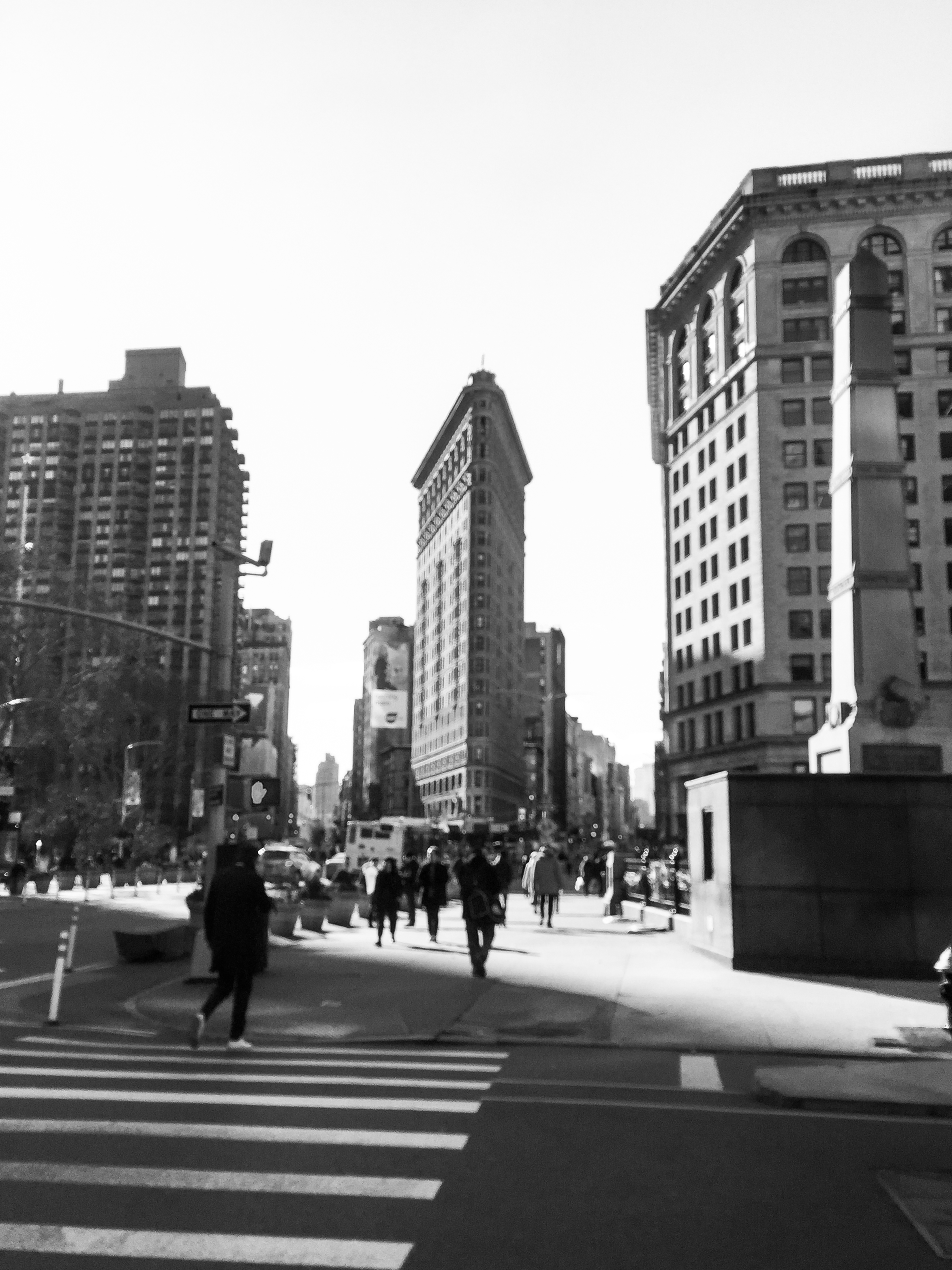 I took the metro into the city and got off in the Flatiron District, with the hopes of stopping by the Nomad Maman, only to be met with a “closed for private event sign.” I had heard so many great things about the cute French patisserie and coffee shop that I had it set in my mind that I was going to make it there this trip, so I punched the next closest location into my phone and briskly walked to Soho. It was only 8:30 when I started walking so most shops were still closed, but I could see bustling inside the decorated windows. Since I had all the time in the world, it was actually nice to walk instead of taking the subway because it allowed me to peer into some shops that I could stop in on my way back towards Bryant Park and the 5th Avenue department stores. It all worked out well because the Soho Maman, with a cute market attached, was even better than the Nomad location. I sipped on an amazing honey lavender latte while browsing the market, then took my pistachio chocolate croissant to go as I walked to Bryant Park, along the way popping into the fun Fishs Eddy store and ABC Carpet, which was decked out with vintage Christmas ornaments and beautiful cards and gifts galore. 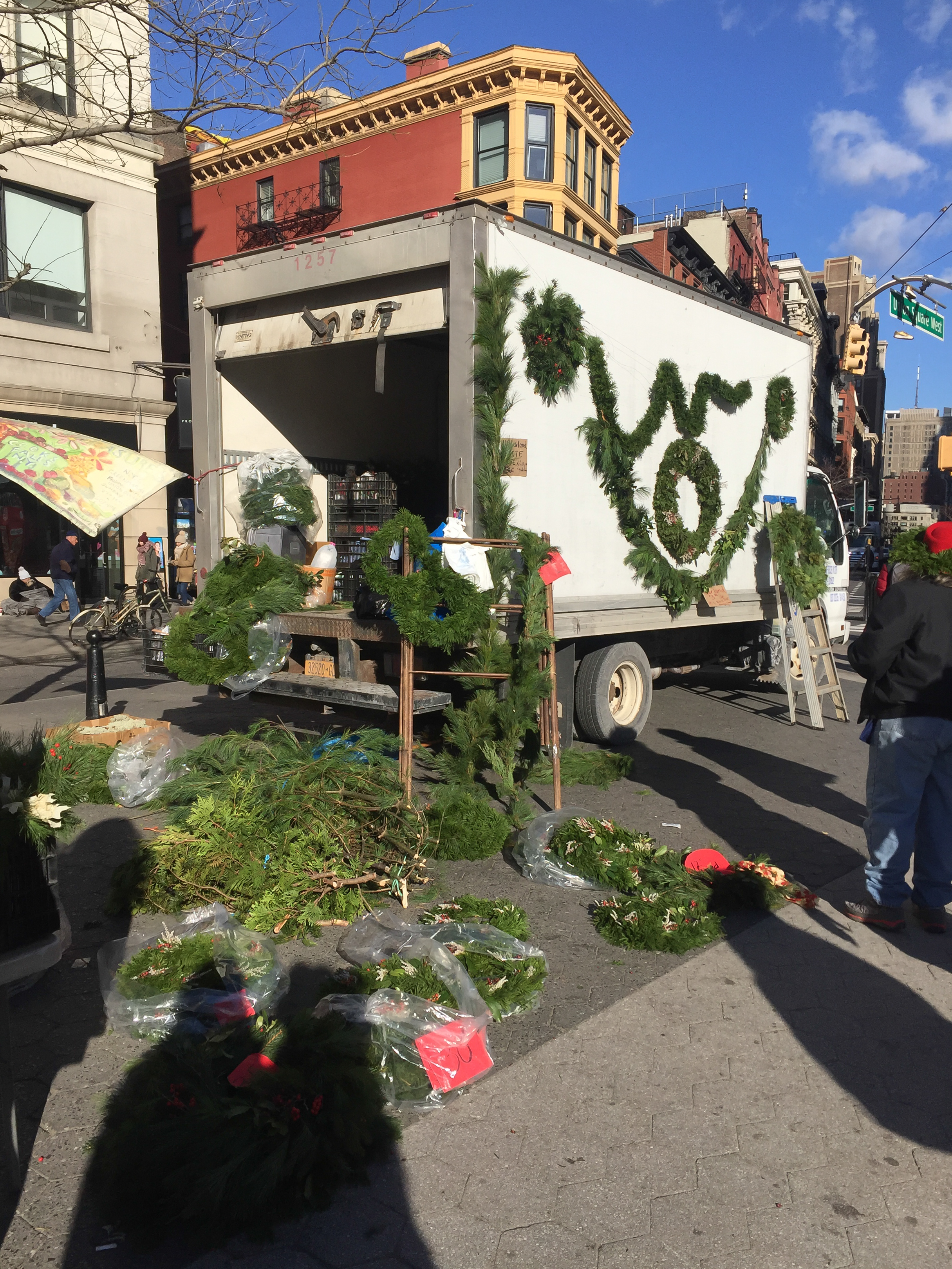 Bryant Square, Columbus Circle, and Union Square were filled with holiday market stands. Each booth housed local vendors, artisan gifts, or tasty snacks, with more than 170 vendors at Bryant Park alone! I moseyed around the stands in search of Christmas gifts and came away with some delicious truffle mustard for my brother in law and sister in law. 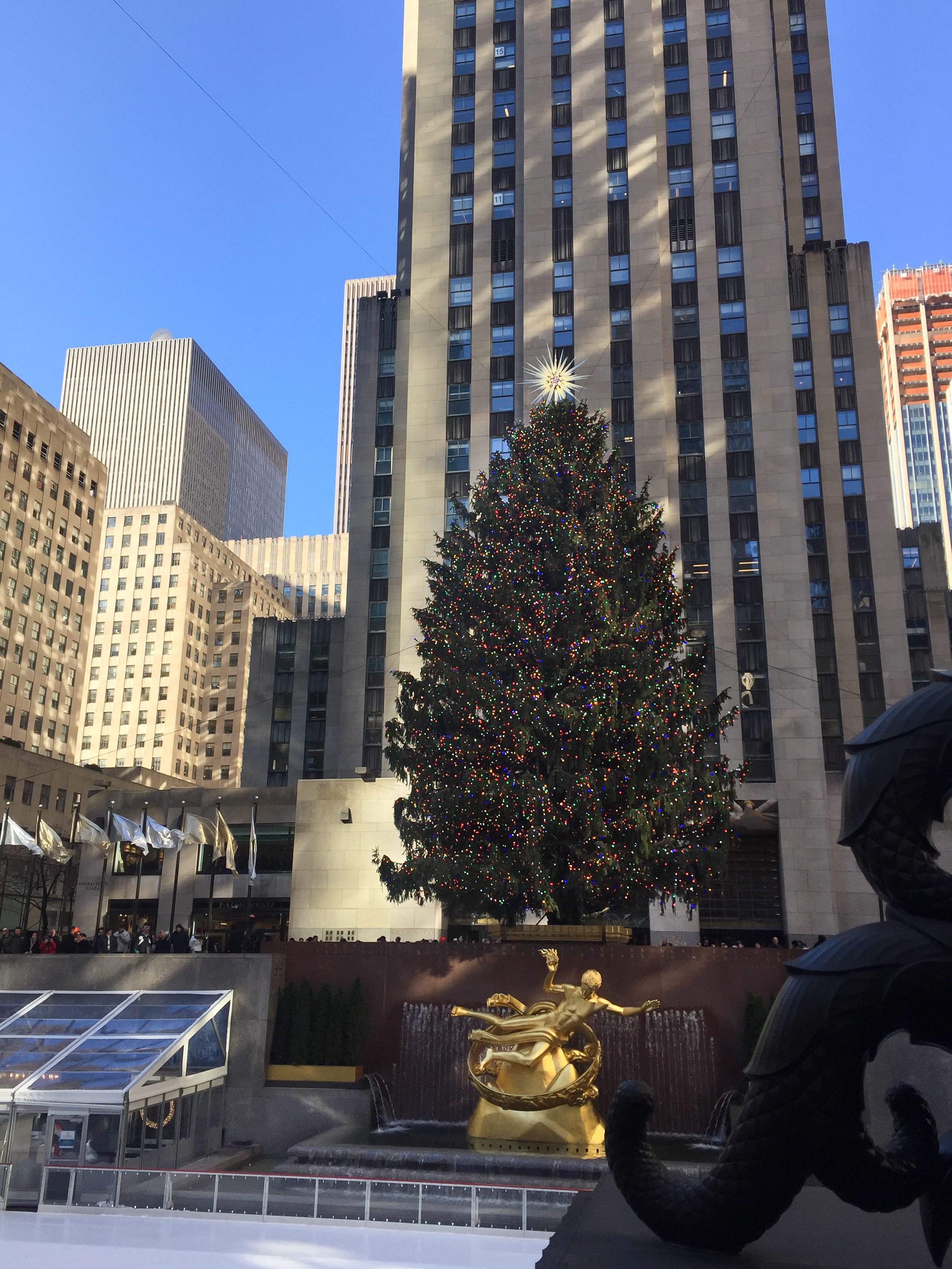 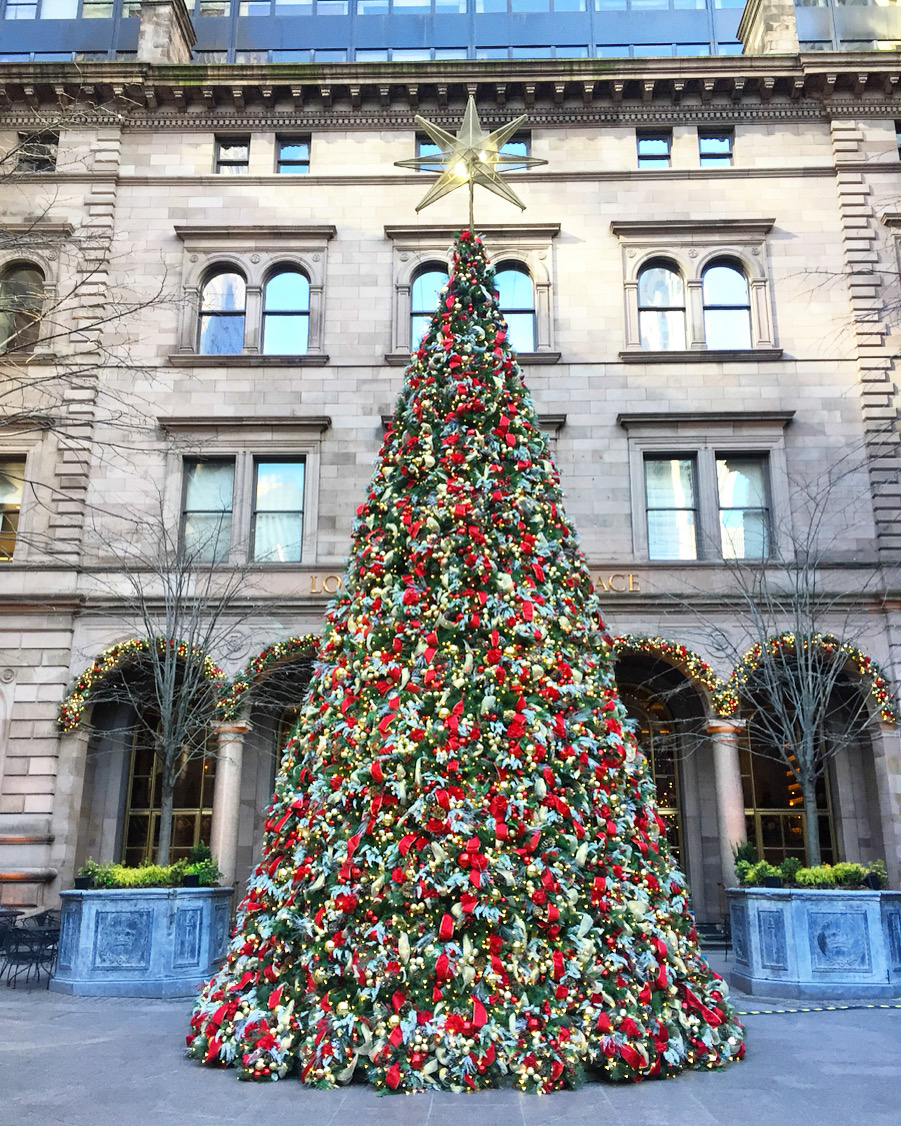 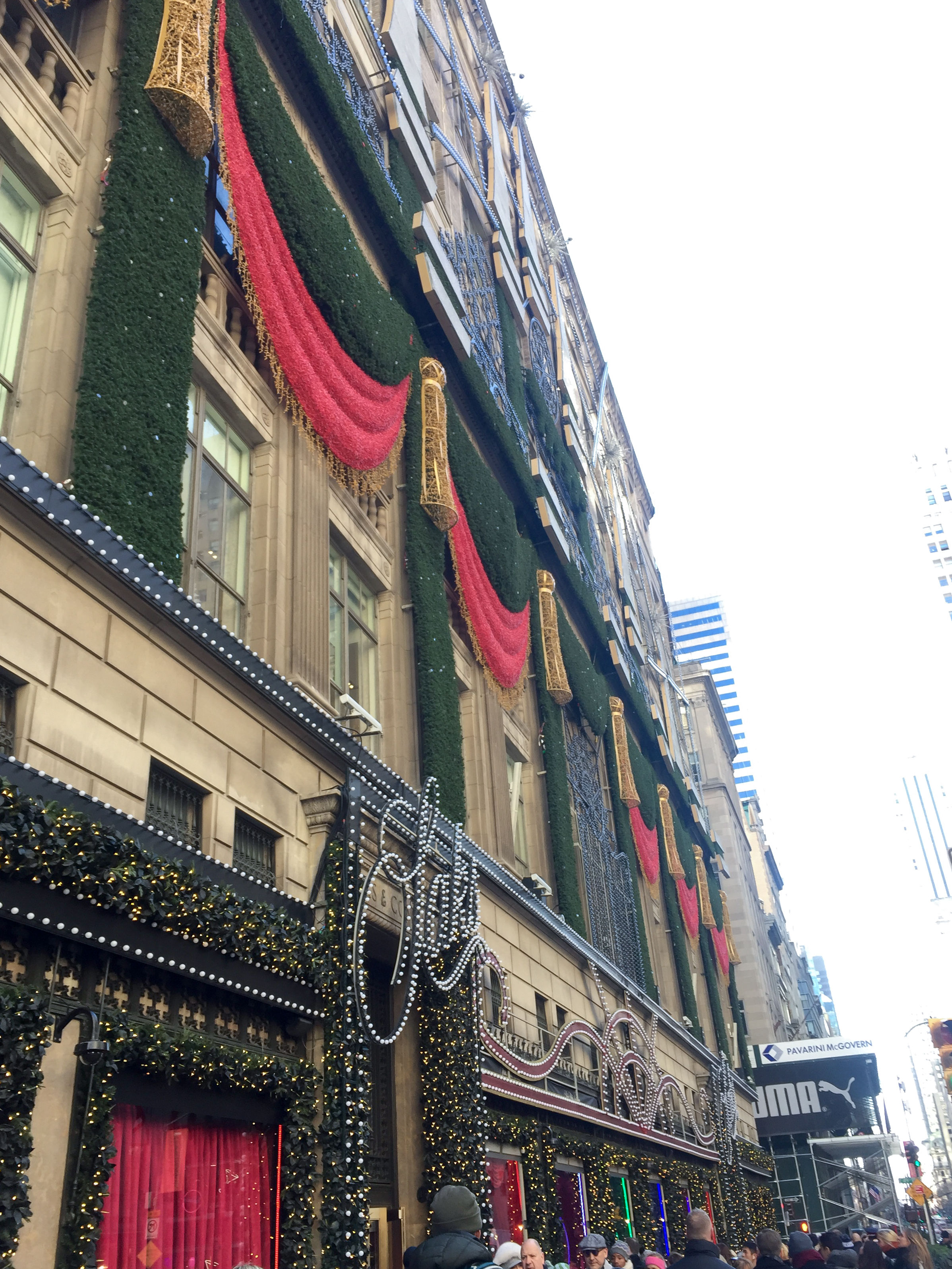 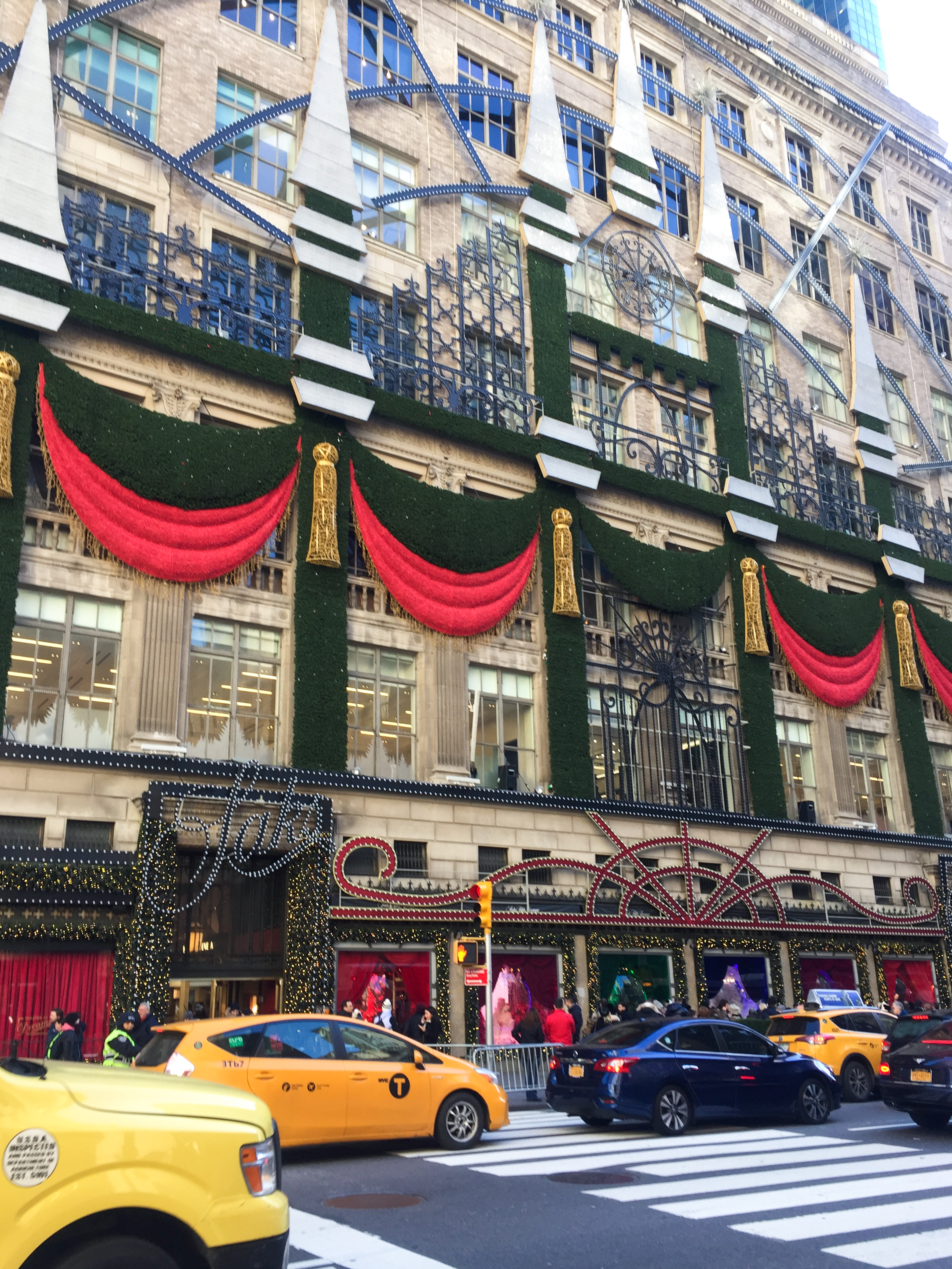 Next up were the storefronts and Christmas trees of Fifth Avenue. Fifth Avenue was crowded with tourists just like me, looking in all of the department store holiday windows, so I didn’t stay long at any of the displays. Since I was alone, I was able to weave through the crowds but was very happy to walk over a block to see the Lotte New York Palace Christmas tree and get out of the hoards of people at Rockefeller Center. While Rockefeller Center is famous for the massive Christmas tree and ice skating rink, the Lotte tree was definitely my favorite, and only had a few people milling around, rather than hundreds. Saks and Cartier did a nice job with their entire building displays, but of all the department stores, Bergdorf Goodman had the best window displays by far. They were so elaborate that I couldn’t help but take photos of each one. 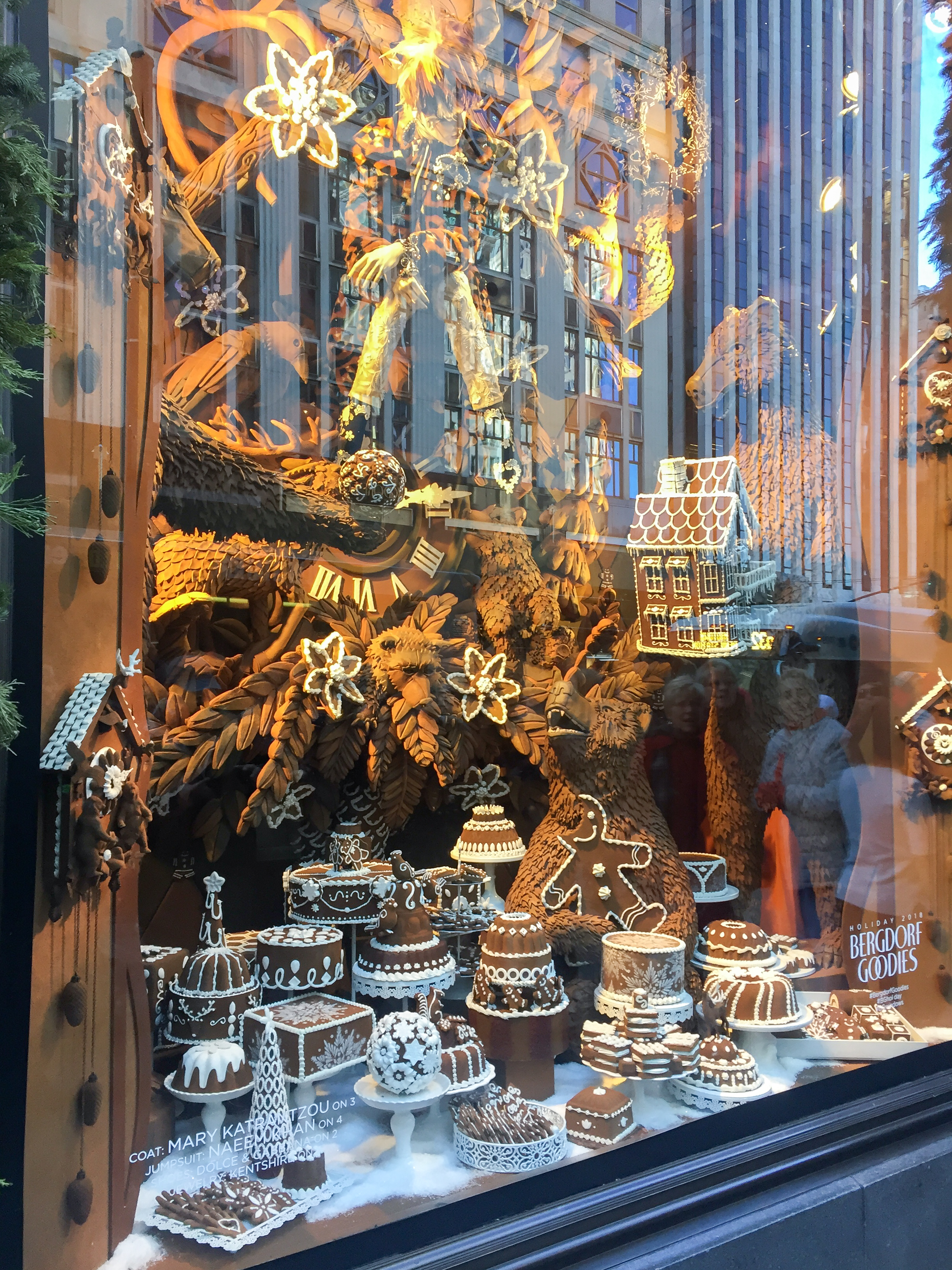 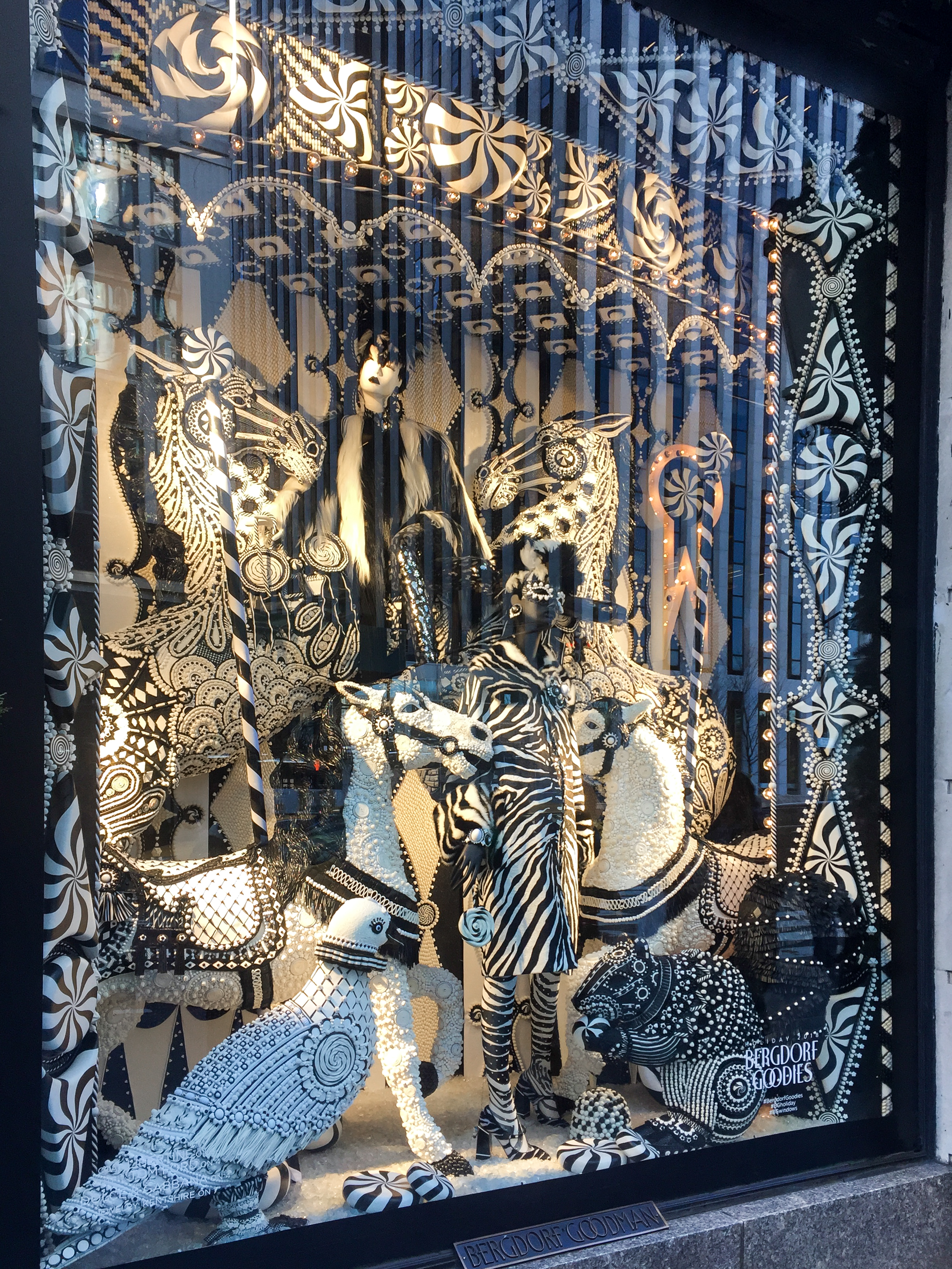 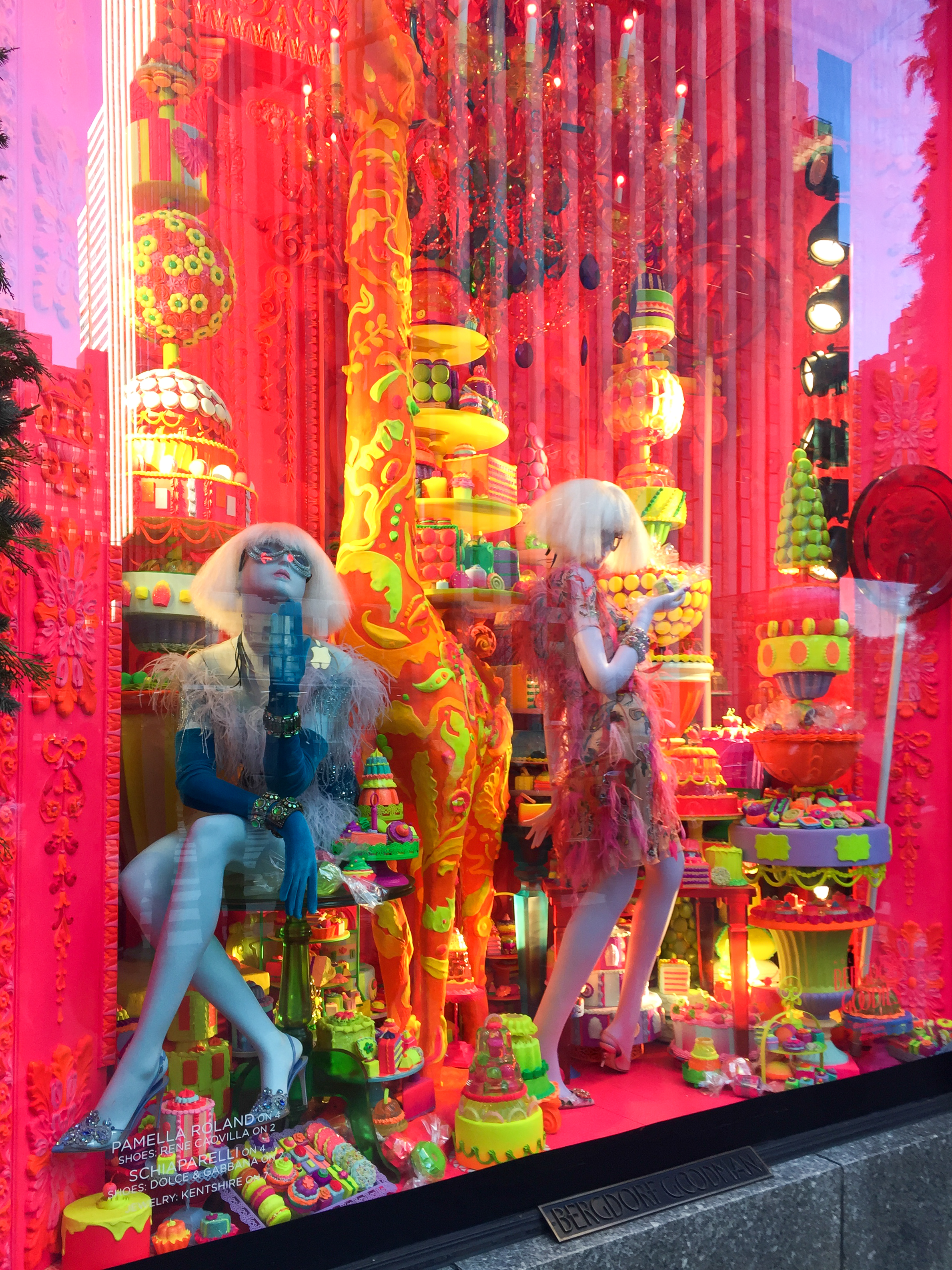 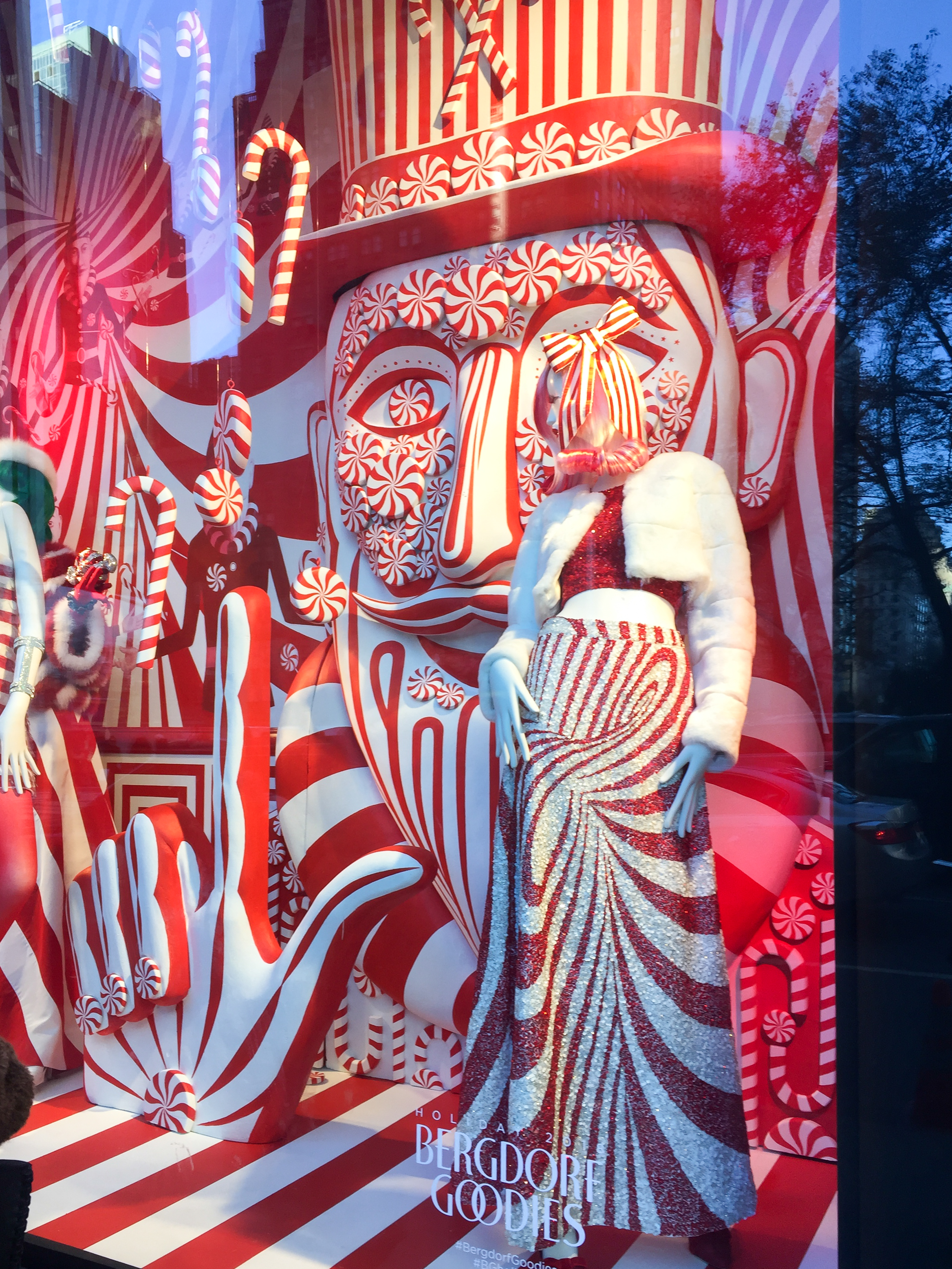 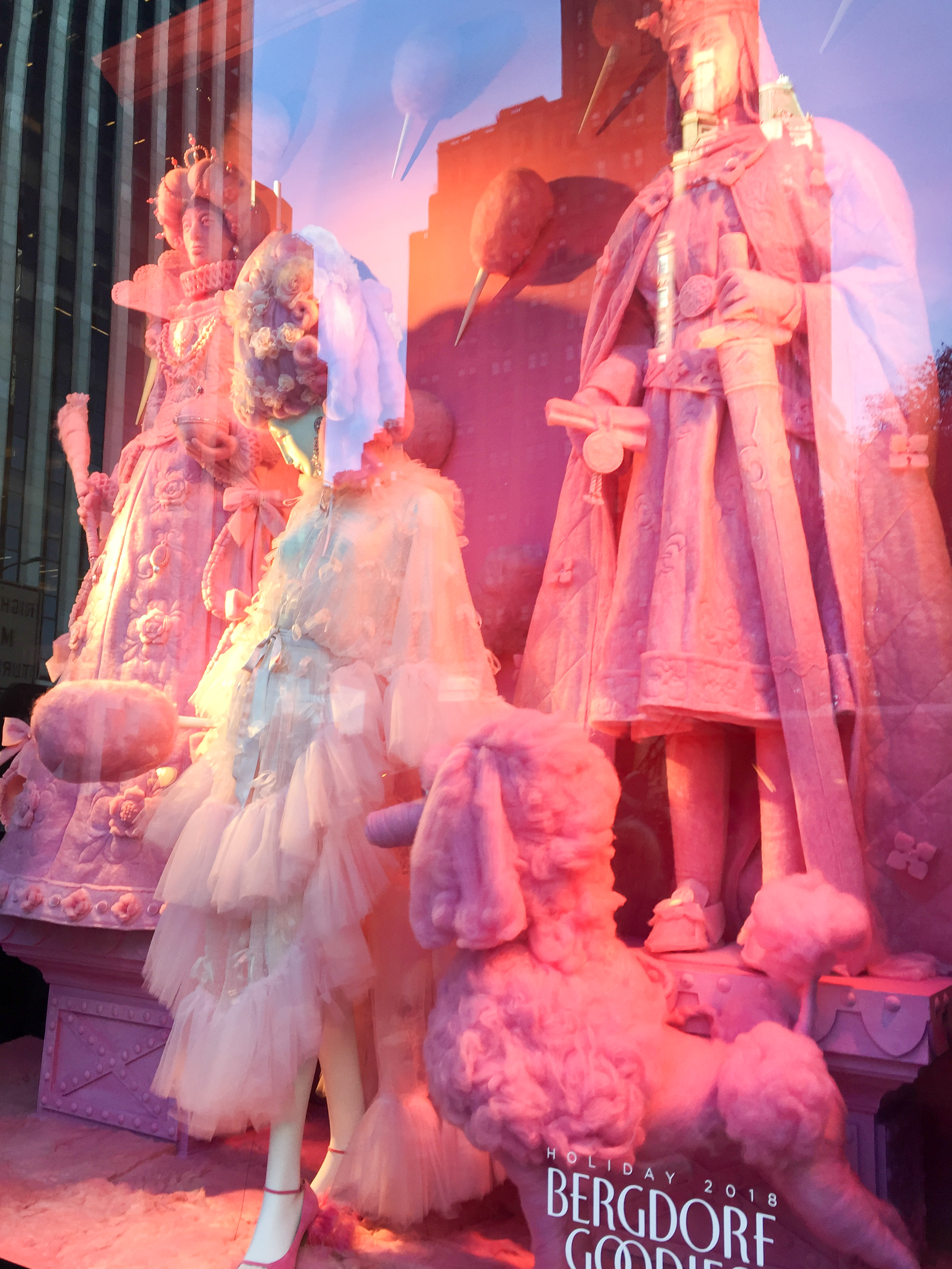 From Fifth Avenue, I hopped up to Central Park and walked along the path from the southeast corner to the southwest corner, enjoying the small, secluded detour. After the hussle, bustle, crowds, noise, and lights on Fifth Avenue, the quiet green and rocky areas of Central Park felt like a refuge from the towering buildings that surrounded them. Upon exiting the park, I immediately was greeted with the Columbus Circle holiday market and the smells of food stand treats. I meandered around, checking out the shops that weren’t in Bryant Park before moving on to Lincoln Center. I don’t know why, but the Lincoln Center Plaza area is always one of my favorite parts of New York City. During the day, when there aren’t shows going on, it is usually quieter, tucked away from the busy streets. I love knowing that wonderful artists perform in those halls and that the extremely talented Juilliard students are right nearby as the next wave of performers to bring joy to those stages and buildings. It is humbling to stand quietly in the midst of those grand buildings that surround you on all sides on their own little performing arts campus in the middle of such a booming city. 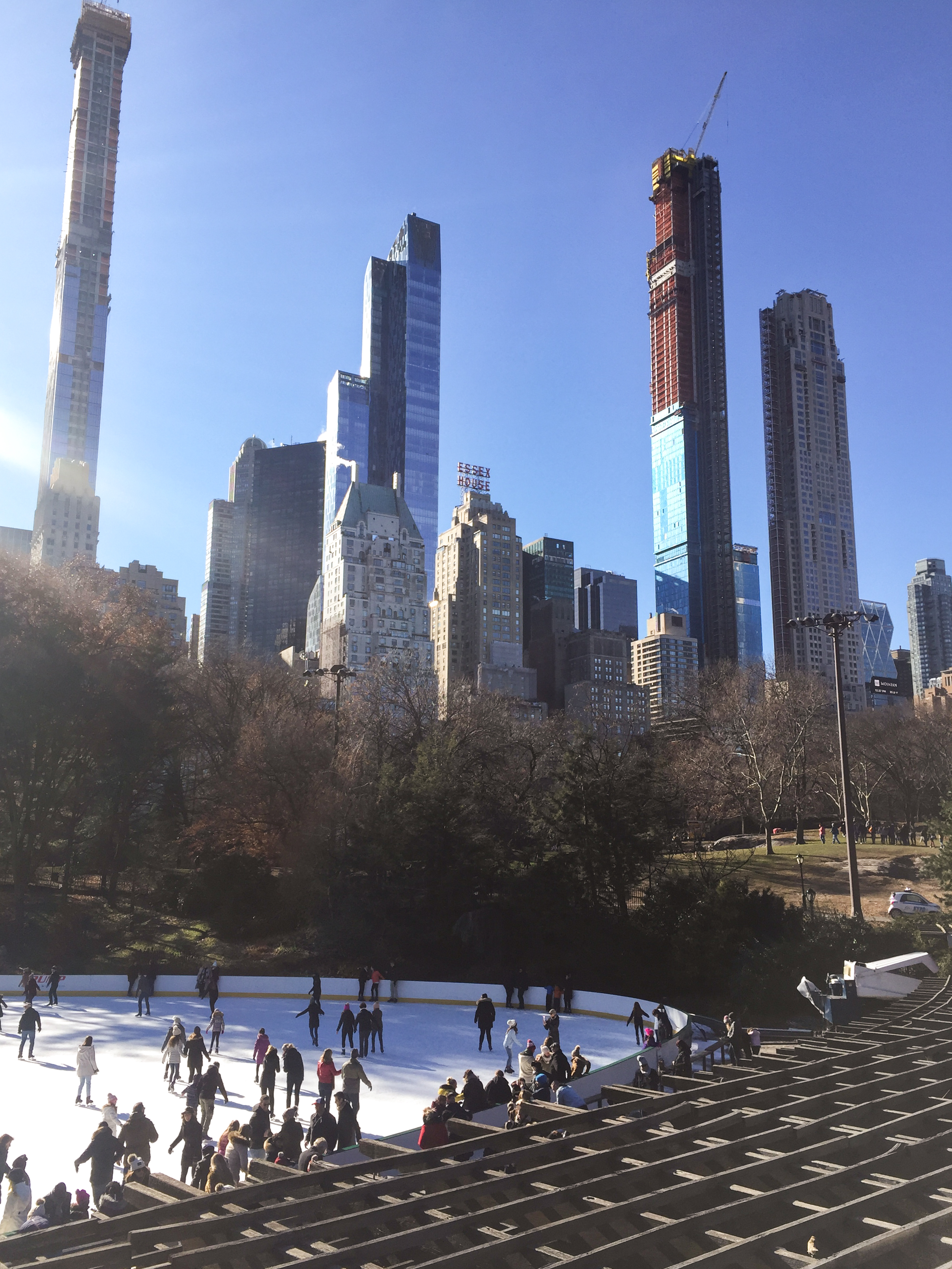 My next stop was Levain on the Upper West Side for a cookie (or two, let’s be honest). Levain is so unassuming, with their tiny basement shop large enough for only a few people at a time. I snagged a chocolate chip walnut and a dark chocolate chocolate chip cookie, but recommend their dark chocolate peanut butter cookies too if you have never tried them. With the warm chocolate chips melting on my cold fingers, I walked through the brownstone clad neighborhood streets to the American Museum of Natural History with hopes of seeing the origami Christmas tree, but unfortunately, it was deeper into the museum, past the admissions counter and I didn’t have time to tour the whole museum to make it worth the admission ticket. I guess that just means I’ll have to come back again ;) 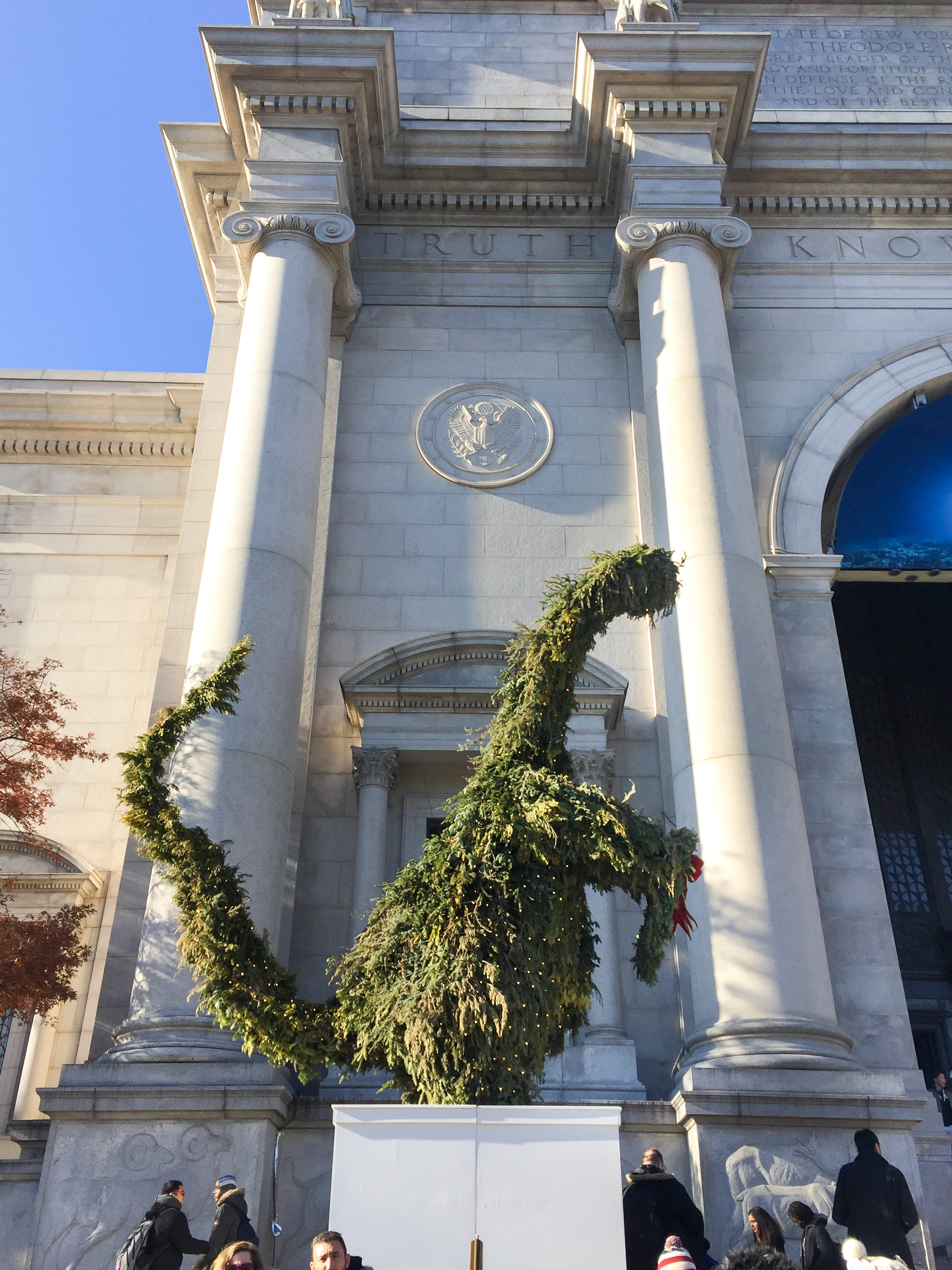 If you have the chance to see NYC at Christmas time, I highly suggest it. Wandering around amidst the decorations and the joyous atmosphere was magical and I would love to do it again sometime for even longer. I hope you had a Merry Christmas and can look forward to a happy New Year!