Get out your pots and pans.  These are worth making now. 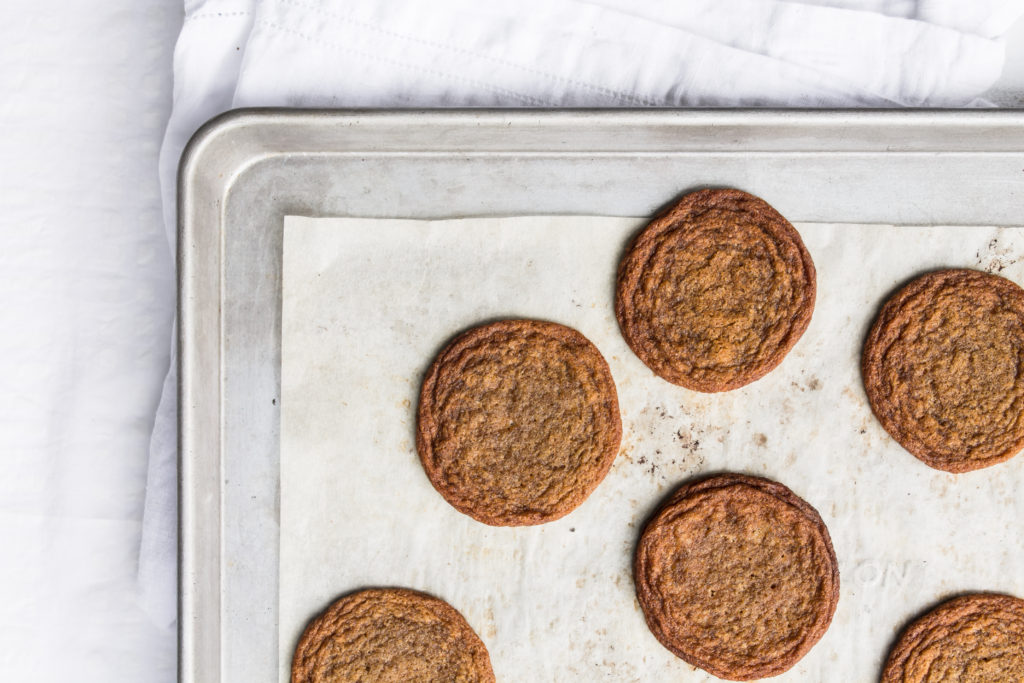 I have already professed my love for apple cider and for pumpkin flavored foods.  Basically fall is wonderful because it is the only time both are around.  While pumpkin is my number one obsession when the weather cools down, I have a soft spot (and now a soft caramel) for apple cider and it can sometimes be a nice change of pace from the pumpkin items that can sometimes overrule every other flavor in the stores. 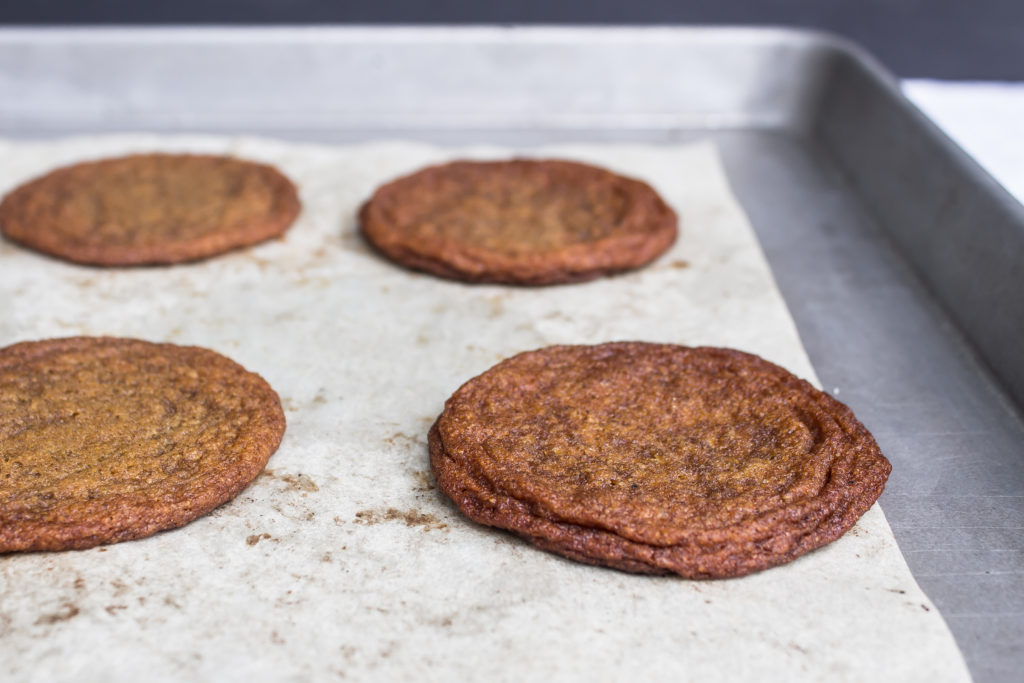 These chewy ginger cookies are perfect for a cold day.  Filled with spices and a hint of molasses, they have a delicious depth.  The cinnamon, cloves and ginger meld together to form a perfectly spicy cookie.  The cookies spread out but stay soft, with a little crunch on the edges.  For a twist, experiment with cardamom and a pinch of black pepper. 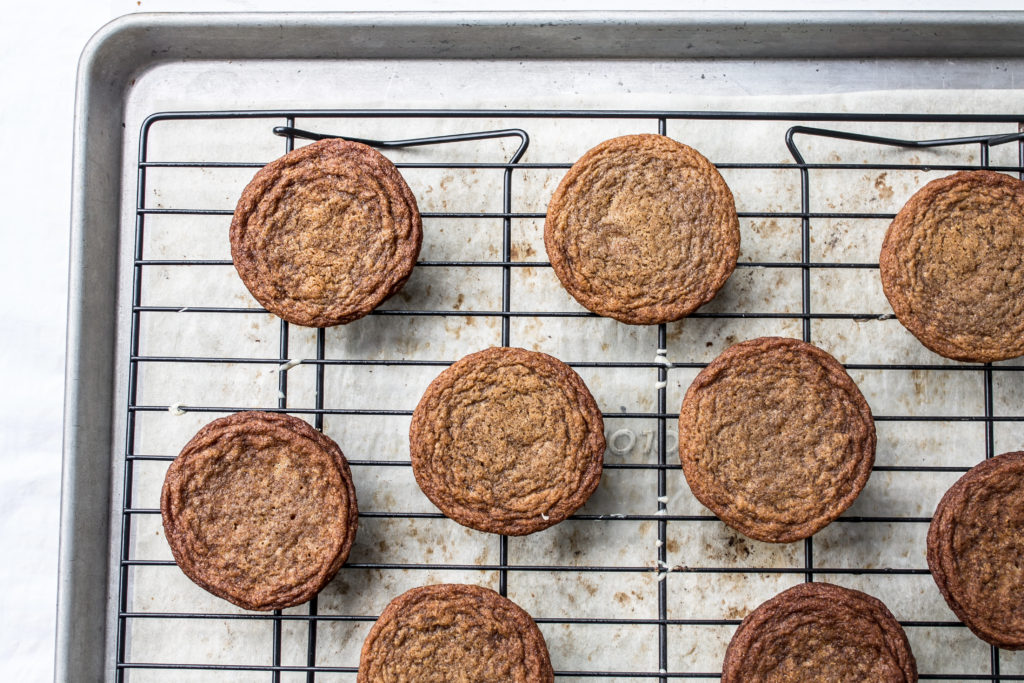 All lined up and ready to eat.  Or so you may think, until you make the apple cider caramel, which you will then proceed to spread on everything.  Rightfully so. 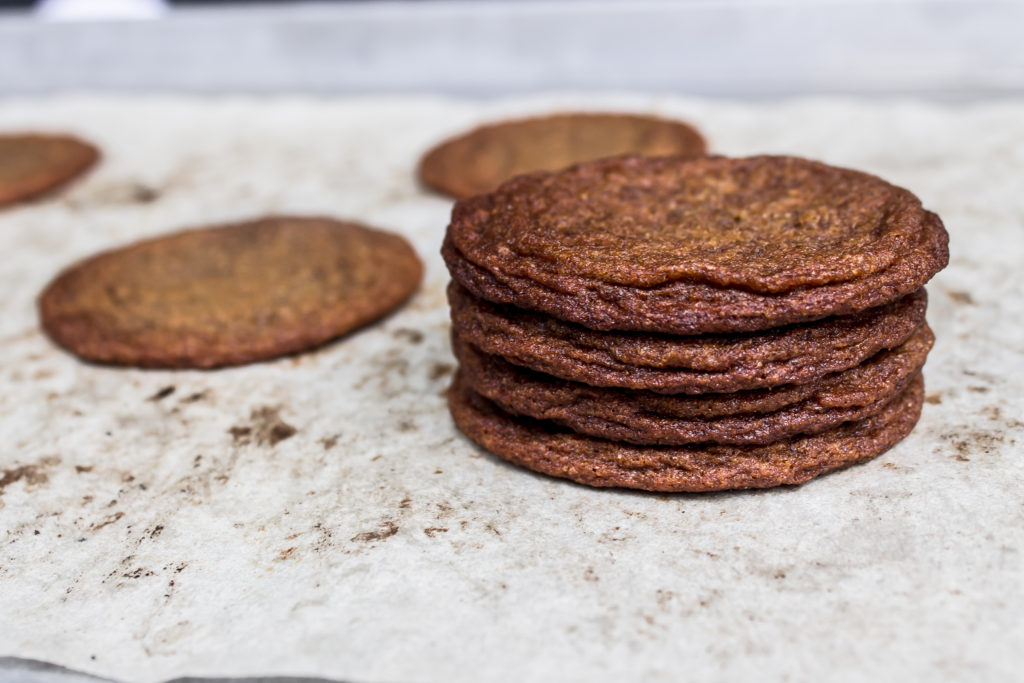 I found my new favorite fall treat.  Apple cider caramel.  While the cookies are delicious on their own, it is really the apple cider caramel that takes them over the edge.  The caramel starts by reducing apple cider to a syrup.  Concentrated apple cider is the base for the rest of the typical caramel ingredients.  We finish it up with a scoop of cinnamon and a sprinkle of sea salt.  I could eat it with a spoon (and I may have…). 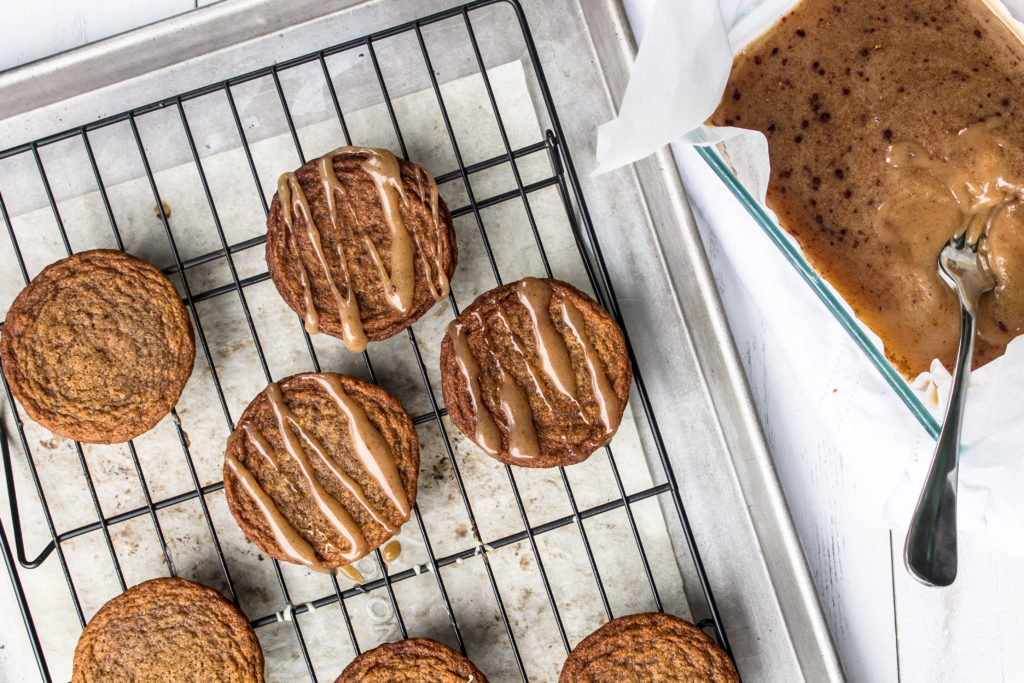 Drizzle it across the cookies and devour.  Or serve them to your friends.  Your choice.

Seriously, this caramel is the best thing I have made this fall.  The apple cider is not just there so we can pretend like these have a fall twist, it really makes a difference.  The caramel has a distinct cider flavor, enhanced further by the cinnamon.  It is even better when you use high quality apple cider or cider that is already spiced.  Trader Joe’s has spiced apple cider and honeycrisp apple cider that are both delicious but you could also add your own mulling spices to a regular gallon of apple cider.  And don’t be afraid of the sea salt. 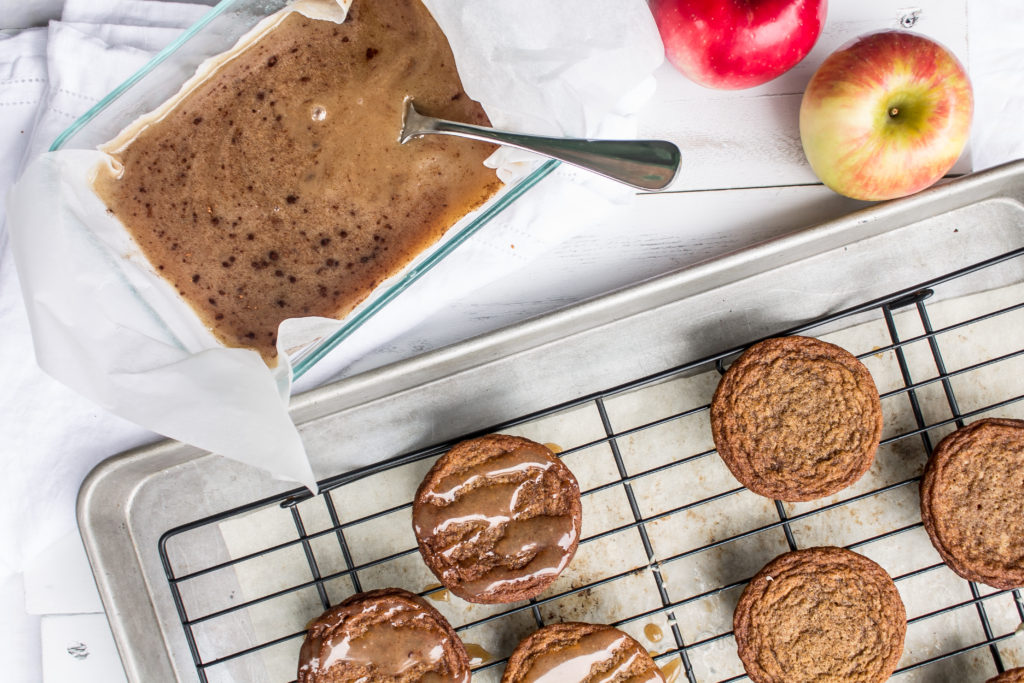 The brown flecks in the caramel in my pictures is the cinnamon that I forgot to stir in.  Whoops.  I swirled it around in the caramel once I poured the mixture into the pan and that did the trick.  Also, I made this caramel multiple times and was too impatient to boil it down as much as I was supposed to.  If you reduce the cider to a thick enough syrup, you may end up making soft-solid caramels.  Either way it turns out, slightly liquidy or soft-solid, you have a great way to use it.  One is just more acceptable to eat straight from the packaging.  No judgement, no worries. 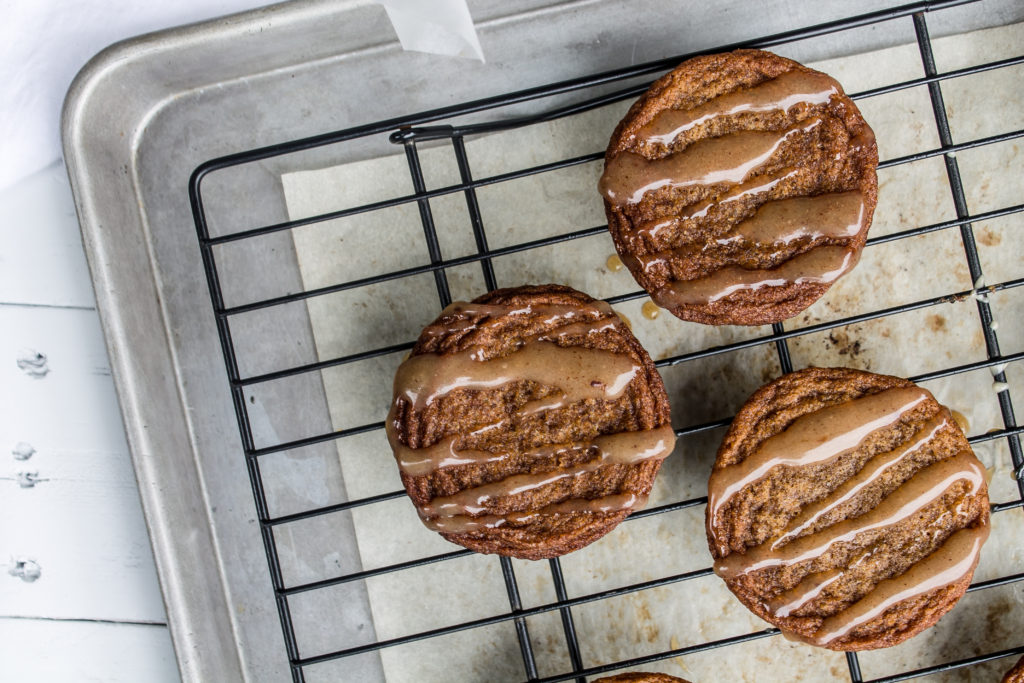 If someone made some of these for trick-or-treating, I would fill my whole basket.

To make the Apple Cider Caramel
In a small saucepan heat the cider over medium-high heat until it comes to a boil. Lower the heat a bit once it starts boiling, but allow the cider to continue boiling. Continue to cook the cider, stirring it occasionally until it reduces to a thick syrup, about ¼ cup. While it is cooking, line a small pan with parchment paper and get the rest of your caramel ingredients ready. You won’t have time to get them out once the caramel reaches the right temperature.

Once the cider has reduced enough, remove from the heat and add the butter, sugars and cream. Return the mixture to the heat and let it cook until the mixture reaches 252 degrees F. Stir occasionally. As soon as the mixture reaches 252, remove the pan from the heat again, stir in the cinnamon and salt, and pour into the prepared pan. Let the mixture stand until set, at least a few hours or overnight. The process might speed up if you place the pan in the refrigerator. After making this recipe a few times, my results have turned out as a semi-solid but still slightly viscous mixture (I probably wasn’t patient enough with the apple cider reduction). If yours results in a slab of caramel, grease a knife and slice it into small squares. Wrap the squares in parchment paper, twisting the ends to seal them. Store the caramel, liquid or solid, in a jar or airtight container. This makes more caramel than you need for the cookies, but I assure you, it won’t go to waste. Slather it on your pumpkin bread, drizzle it on your latte, put it on your s’mores, eat it out of the jar… it won’t last long.

To make the Chewy Ginger Cookies
Preheat the oven to 375 degrees F.

In a medium bowl, whisk together the flour, baking soda, cinnamon, cloves, ginger and salt. Set aside.

In the bowl of an electric mixer, beat together the butter and sugars until light and fluffy, about 1-2 minutes. Add the eggs and molasses and beat on medium-low speed until all ingredients are fully incorporated. Slowly add in the dry ingredients and beat until everything is combined.

At this point, you can make the cookies right away or wrap the dough in plastic wrap and refrigerate for later. If you are baking the cookies, roll the dough into small balls, about an inch in diameter. Place each cookie dough ball on the cookie sheet, with at least 1-inch of space between other balls. Bake for 7-10 minutes, until the cookies begin to crack on top. Remove from the oven and let the cookies cool on the tray for a few minutes. They will crack more and flatten as they cool. When the cookies are slightly cool, transfer them to wire racks to cool completely while you place the next cookie dough on the tray.

After the cookies cool but while they are still on the wire rack, drizzle apple cider caramel across them and let them sit for a few minutes. Serve immediately. If you don’t plan to serve the cookies immediately, wait until you are ready to serve them to drizzle the caramel. If your caramel turned out solid, microwave a few pieces until it is liquid-y enough to drizzle.

The uncooked dough saves for weeks in the refrigerator or freezer when wrapped in plastic wrap. Baked cookies save for about a week in an airtight container (if they stay around that long).

Chewy ginger cookies are based on these and ginger cookies in Martha Stewart Cookie Cookbook.  Apple cider caramels are slightly adapted from the Smitten Kitchen Cookbook. 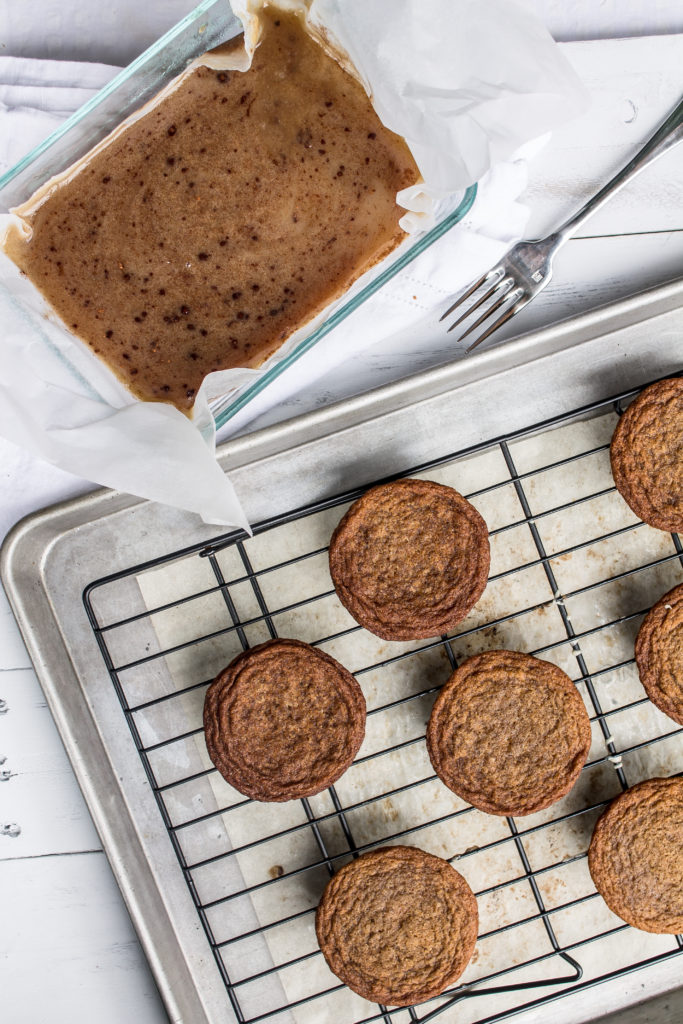