Our tree is up, there is a mess of Christmas decorations all around the house – it seems like the perfect time to break out the eggnog. I can’t imagine a better way to have my eggnog than ooey gooey cinnamon rolls filled with nutmeg and cinnamon swirl and eggnog in the batter and in the cream cheese frosting. And the best part? They only rise for a total of 1 hour and 10 minutes. Yes, please! 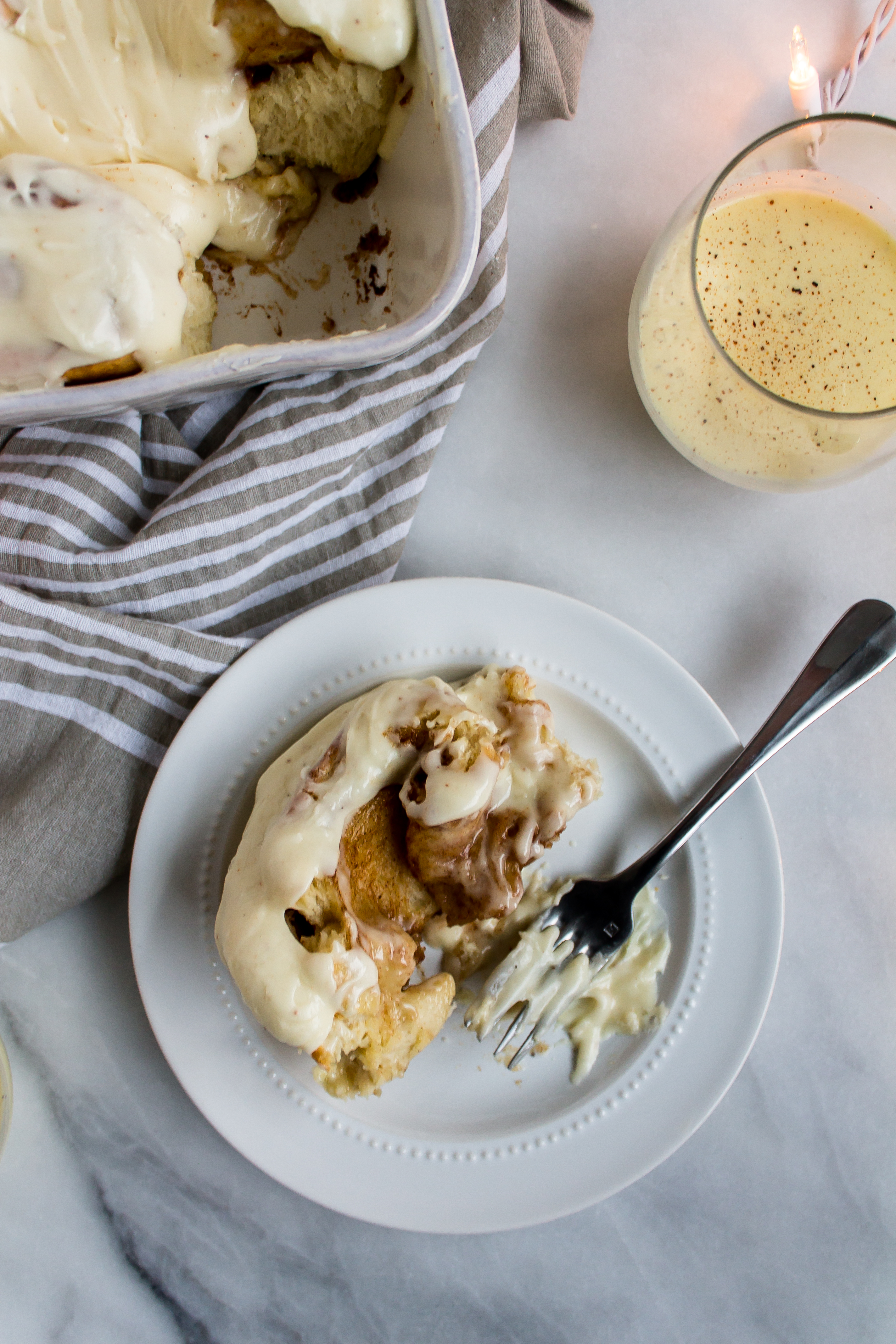 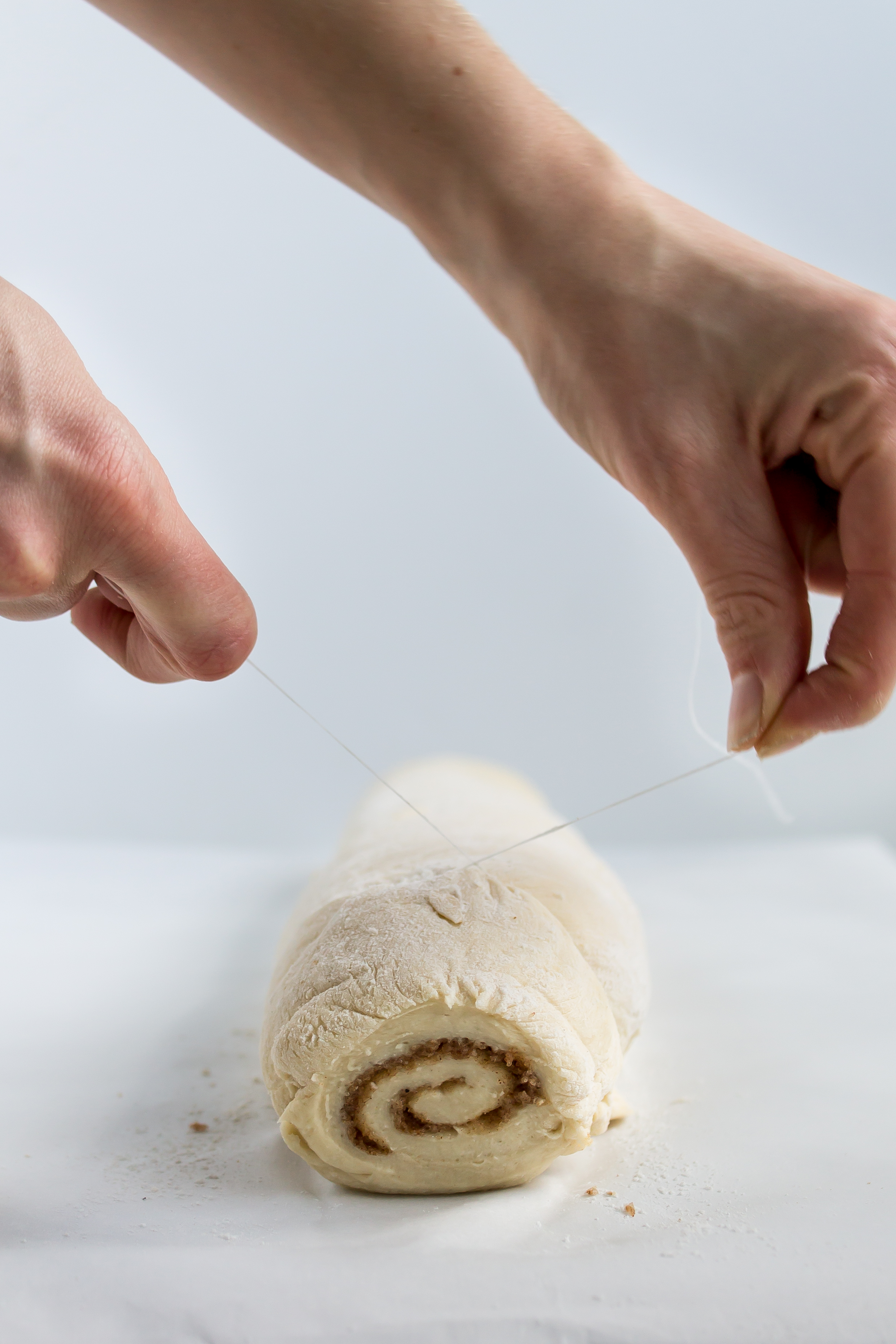 These may just be the best thing I have ever made. Yup, I said it. And, just as exciting, I get to cross “bake yeast bread” off of my 60 before 30 list! As much as I bake, I had never made cinnamon rolls from scratch before, and after these, I don’t know if I’ll be able to go back. These amazing eggnog cinnamon rolls are quick rise, but just as fluffy as the overnight version you love. 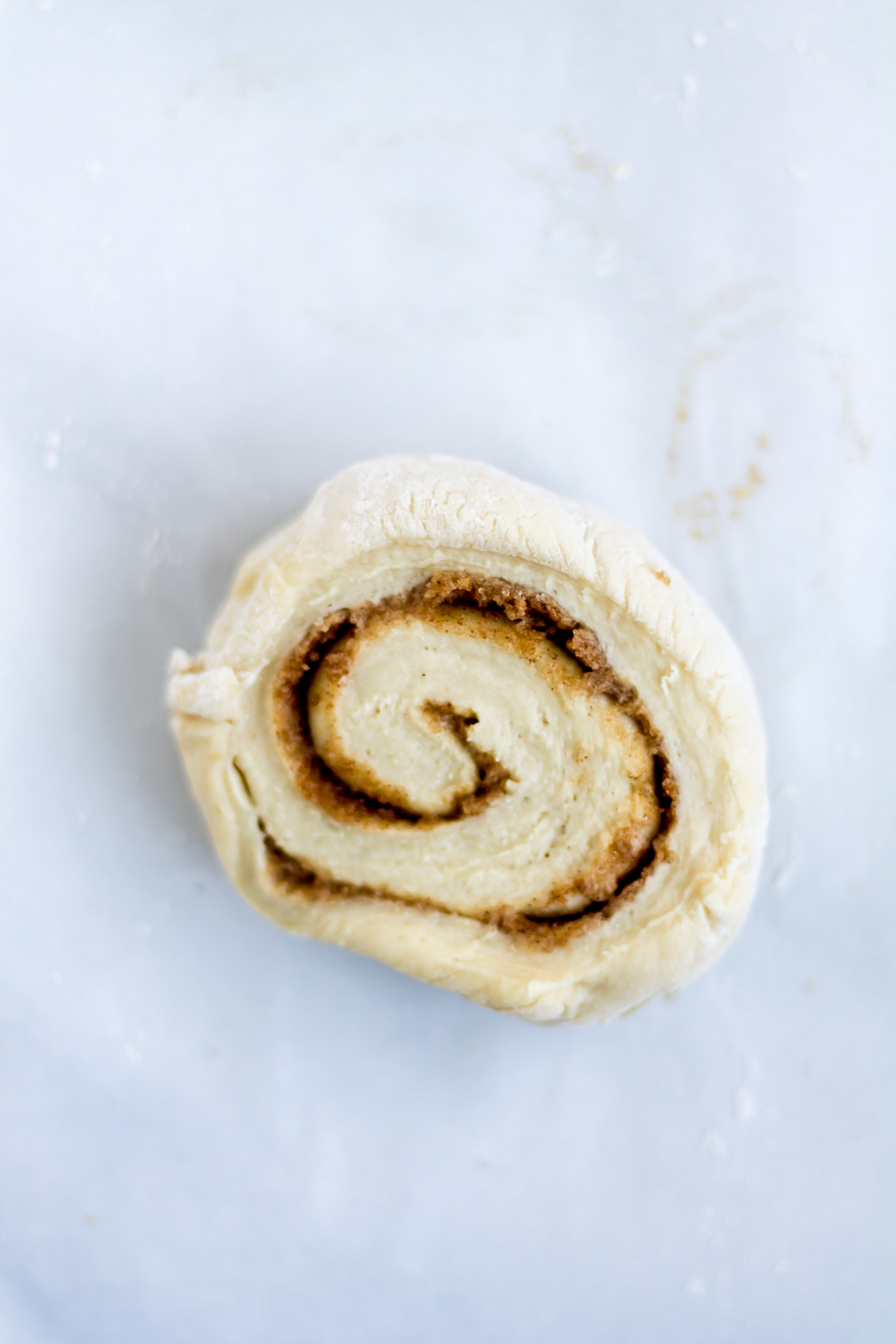 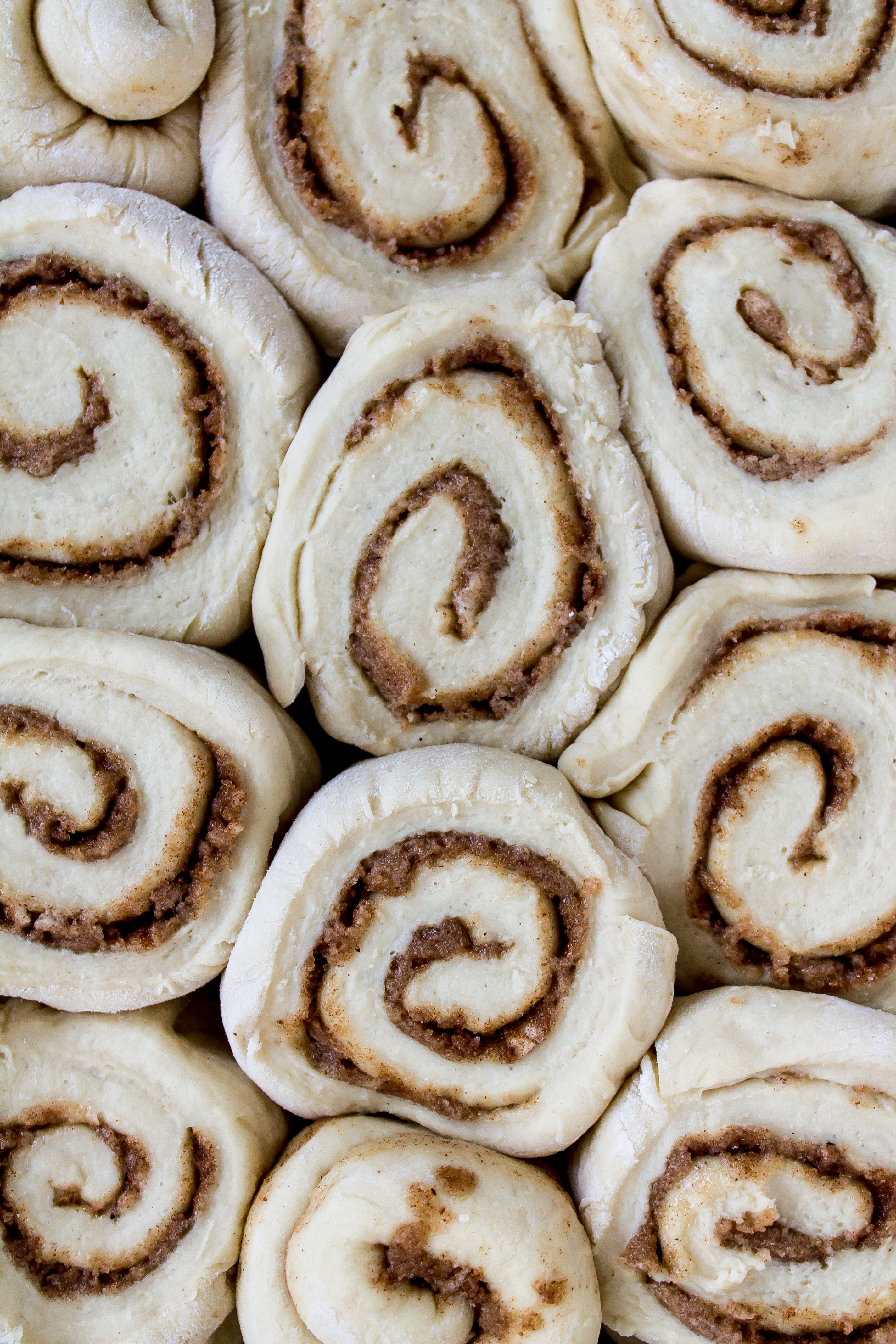 Eggnog can be divisive. It is so rich and thick that, I’ll admit, I don’t love to drink it on it’s own, but add it to a drink or baked good and I’m totally on board. I’ve added it to pancakes and marshmallows before, which were both delicious, but this is my new favorite way to take my eggnog. 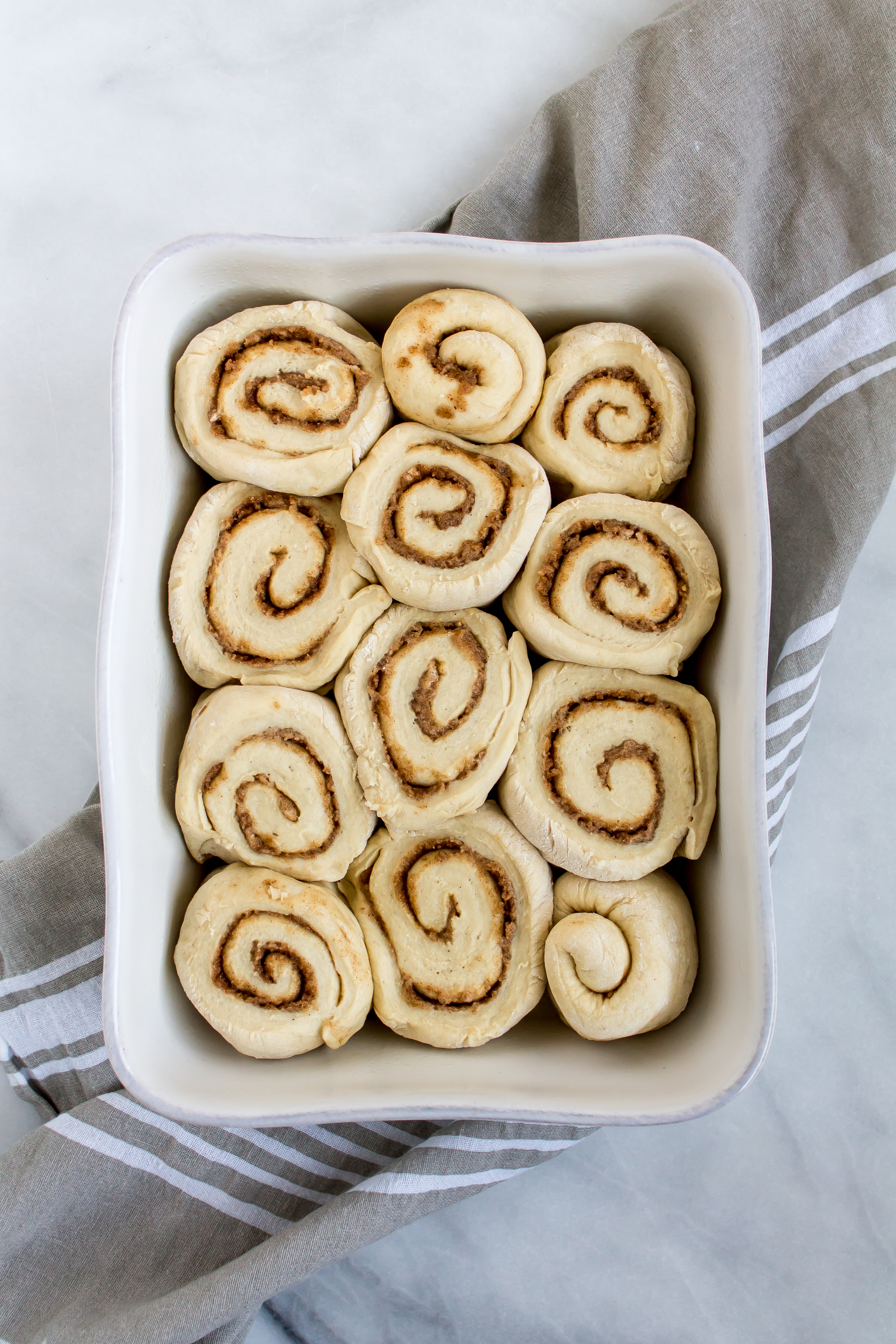 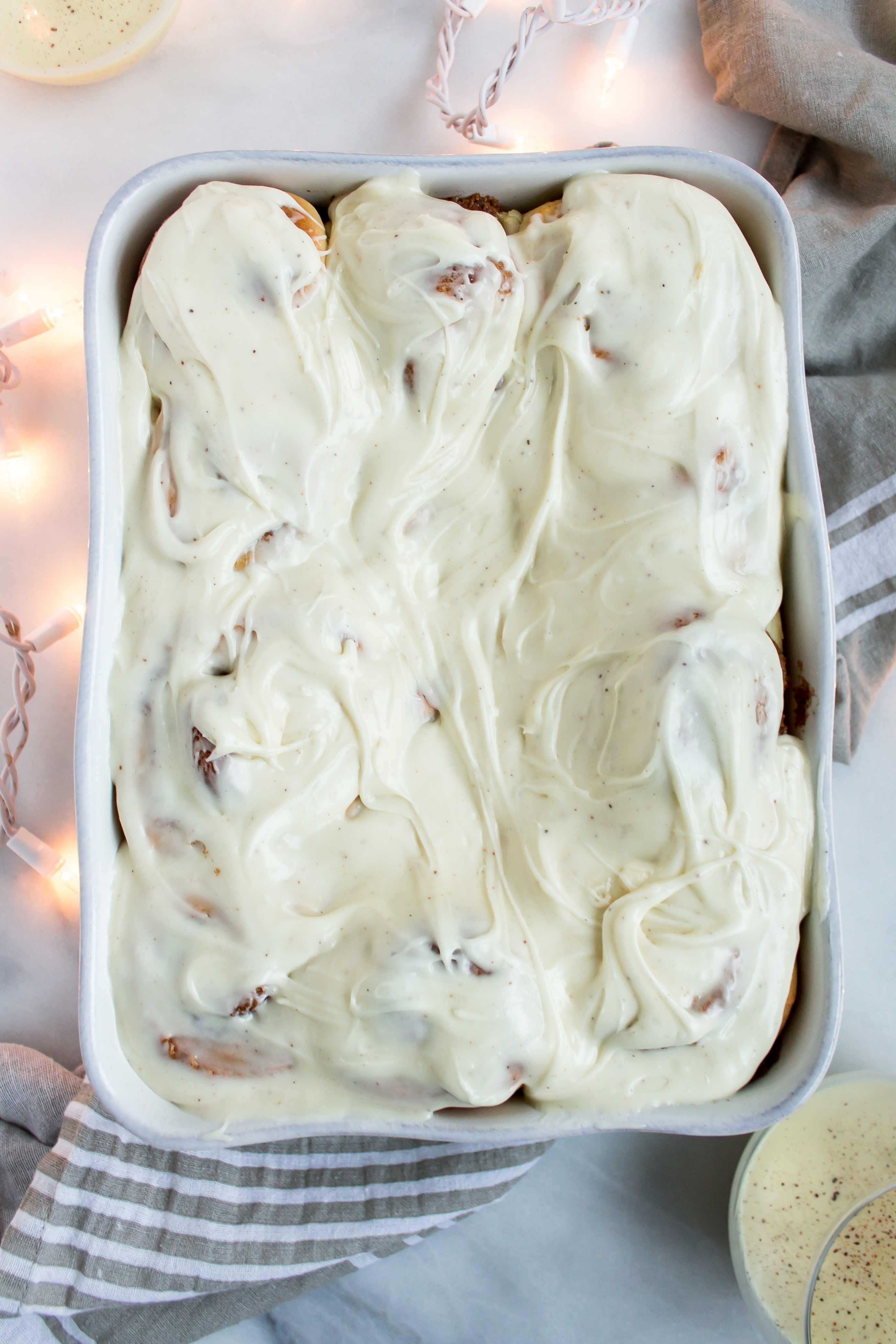 I am convinced that nutmeg plays a huge role (or roll, in this case ;)) in making eggnog have that classic taste we know, so to play up that combination, I added nutmeg to the cinnamon filling and to the frosting. The filling melts and bubbles in the soft, fluffy, golden rolls, and the smooth eggnog frosting takes the rolls to the next level. Each bite is like eating an eggnog cloud. Who wouldn’t want that on Christmas morning? Or for a tree trimming brunch? Or while wrapping presents? You get the picture ;) 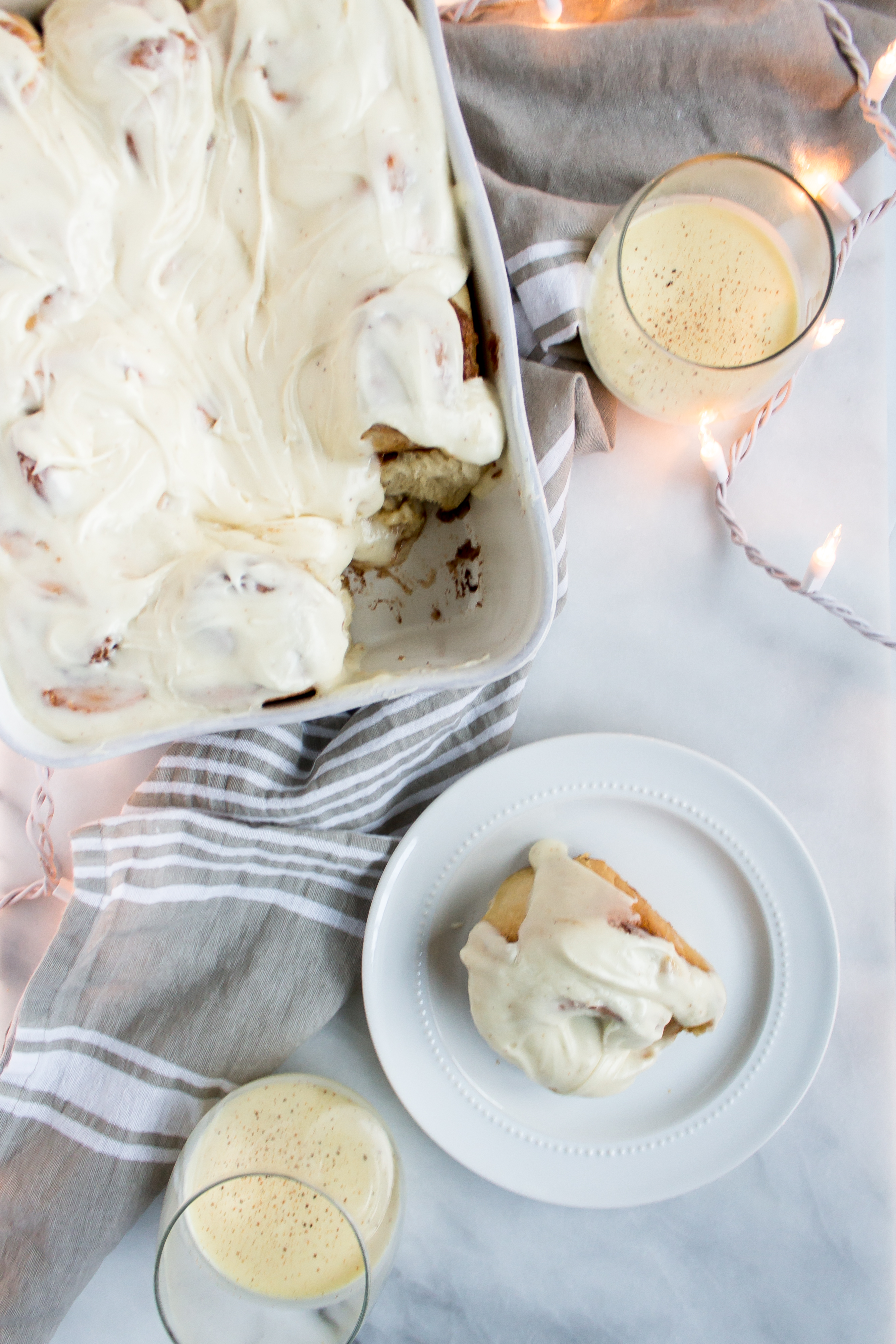 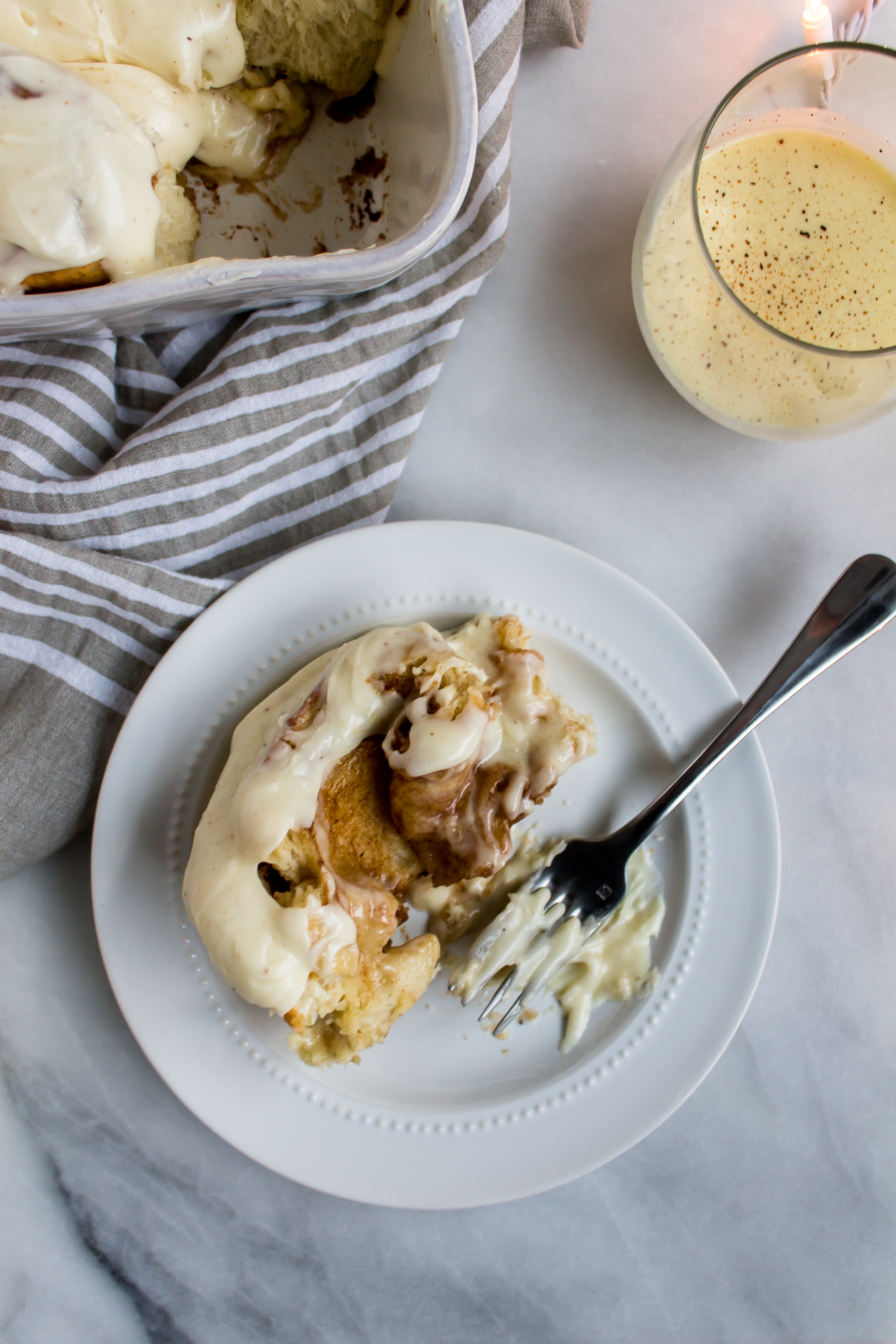 To make the dough:
In the bowl of a stand mixer, combine 2 cups flour, sugar, yeast and salt in a large mixer bowl and stir until blended. Place the eggnog, water and butter in a microwave-safe bowl and microwave in 20-second increments until very warm but not hot to the touch (120 to 130 degrees F). Add the liquid to your flour mixture. Add the egg and beat for 2 minutes at medium speed, scraping down the bowl occasionally. Add 2 cups flour; then beat for 2 minutes at high speed, scraping down the bowl occasionally. Mix just enough remaining flour into the dough so that it will form a lose ball when you bring it together.

Working on lightly floured surface, knead your dough until it is smooth and elastic and it springs back when you lightly press it with 2 fingers, about 6 to 8 minutes. Cover with a towel and let rest for 10 minutes.

To make the filling and assemble:
Coat a 13 x 9 inch dish with nonstick cooking spray and set aside.

In a small bowl, blend together brown sugar, sugar, cinnamon, and nutmeg.

On a lightly floured surface, roll the dough into a 14×10-inch rectangle (or something similar). Spread the butter evenly over your dough, then sprinkle the cinnamon sugar mixture on top of the butter. Starting at long end of the rectangle, tightly roll up the dough. Pinch it at the seams to create a seal. Cut the log into 12 pieces (I like mine a little varied in size, but you can make them even if you prefer). An easy way to cut the rolls without squishing them is to use unflavored dental floss. To do this, take an end of the floss in each hand and slide it under the roll. Cross one end over the other without switching hands to tighten the floss across and through the dough at the same place to create your slices. Place the rolls in your prepared pan, cover with towel, and let rise in warm place until doubled in size, about 1 hour.

To make the frosting:
In the bowl of a mixer, cream together cream cheese, butter, and vanilla until the mixture is light and fluffy, about 2-3 minutes. Add 2 cups of powdered sugar and the nutmeg, then 6 tablespoons of eggnog and mix until smooth. Add additional powdered sugar 1 cup at a time, mixing each time to incorporate. Mix until the frosting is a good spreadable consistency. You can add more eggnog if it is too stiff.

Spread the frosting on your cooled (or slightly cooled) cinnamon rolls and serve. If you are only serving a few rolls, remove those from the pan and frost them before serving, leaving the rest unfrosted. It is easier to heat up the buns without the frosting already on top.