I realized last night that after the long weekend last week, I never got around to posting. Whoops! We were on the road on Tuesday and it felt like our routine was totally off until the weekend came and we got a reset. While I missed you last week, these pistachio cinnamon morning buns were worth the wait.

jump to the recipe 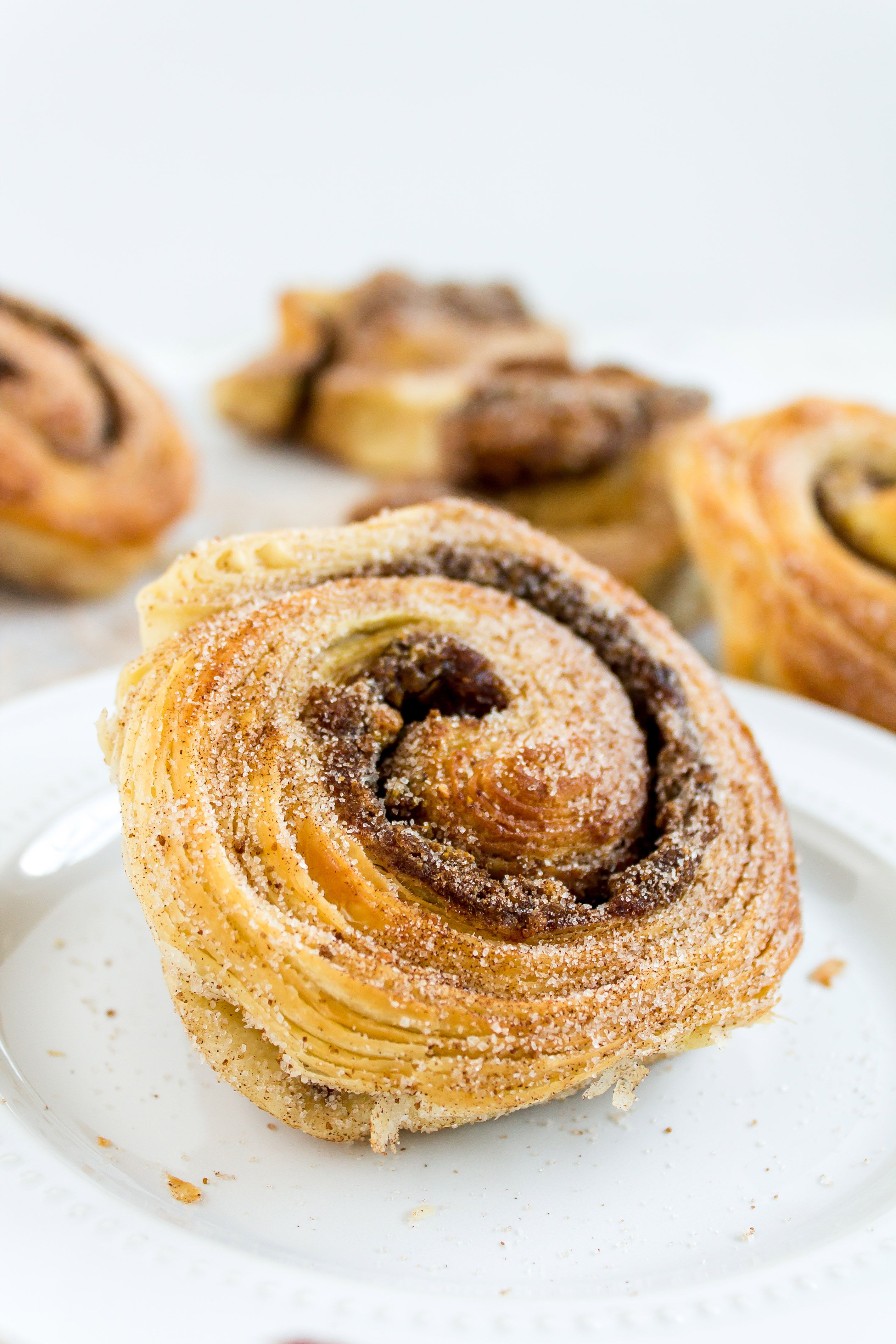 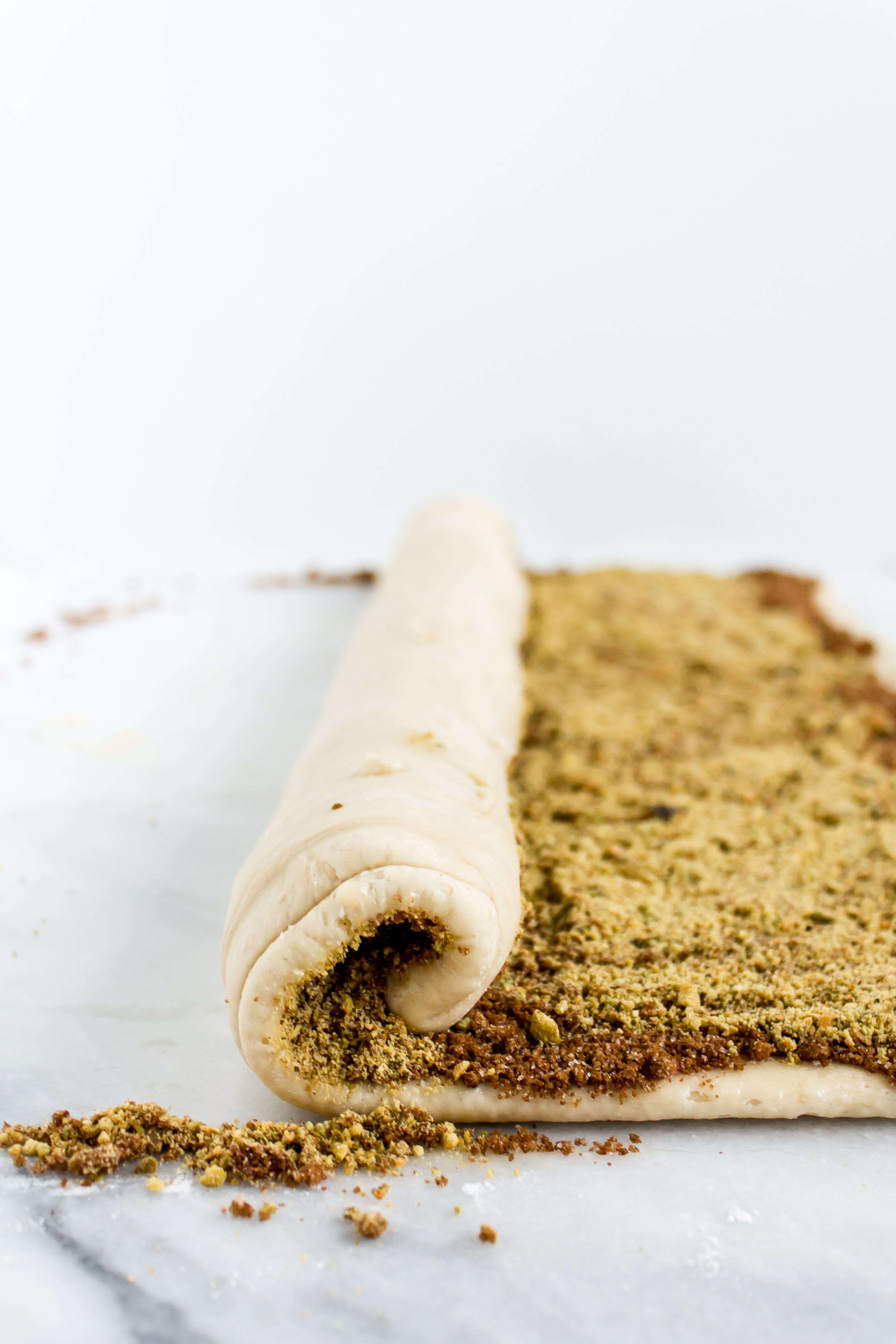 Around this time last year we got almost a foot of snow. I have seen photos and videos from the Midwest from the past few days where everything is covered in snow but life goes on per usual. In the South, that doesn’t happen. When we get a foot of snow, or even a dusting, everything shuts down and a snow day really means a snow day. We usually try to go for a walk in the snow after it first falls to experience and enjoy it for a bit and see the town quiet and covered in a peaceful blanket of white powder, but after our toes are frozen we head back home and hunker down in the warmth of our apartment until the roads are clear again. It was this time last year in the middle of the thick layer of snow when I decided that I would try my hand at homemade croissants. The multi-day process, laminating the dough, and using yeast dough all made me nervous, but I took it step by step and it turned out to be such an exciting process and I was so proud of the results. I had been craving a flaky morning bun for a few weeks, which uses a similar laminated dough process to croissants, when my Bake from Scratch magazine came with a whole section on different flavor variations on the morning bun. Sold. 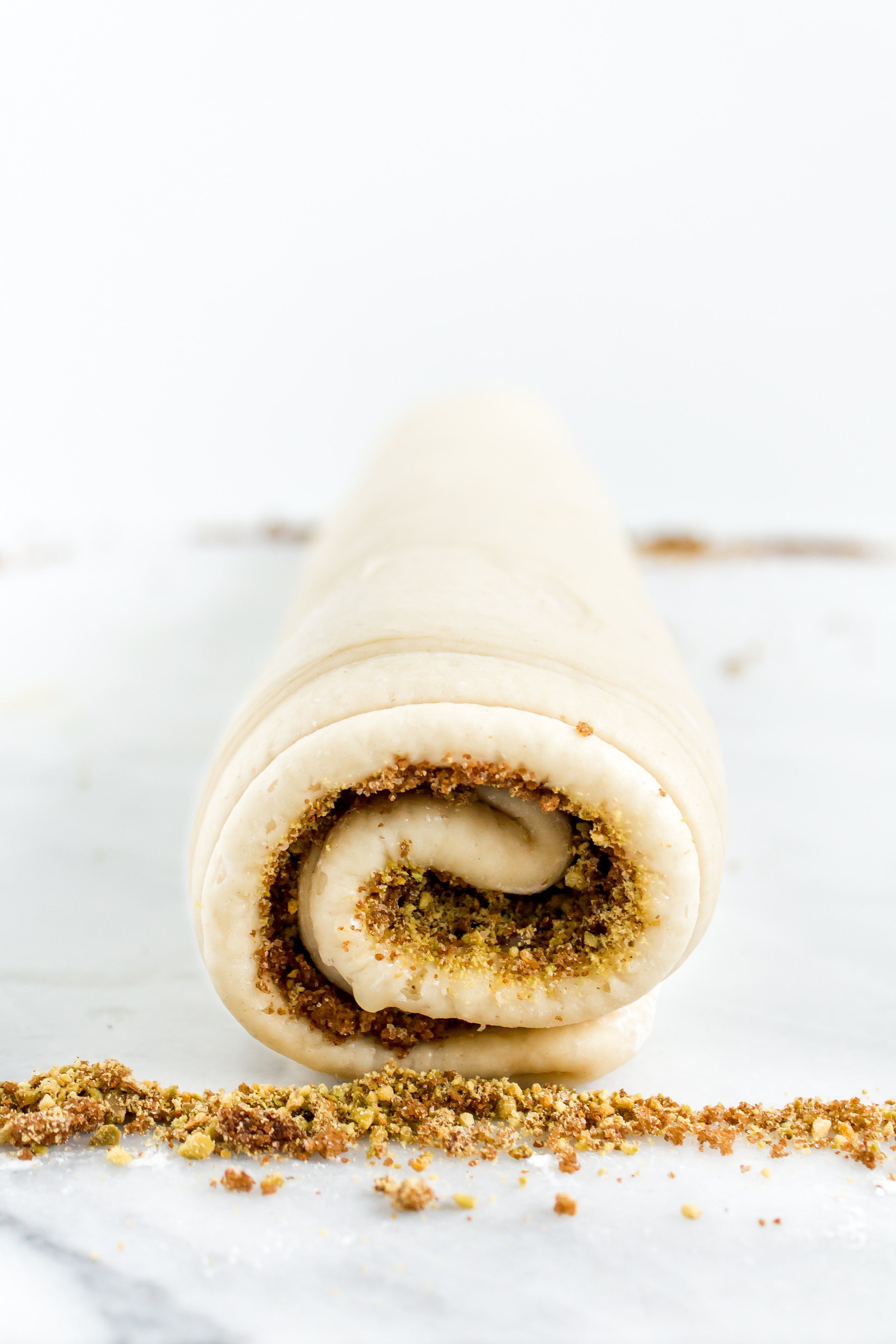 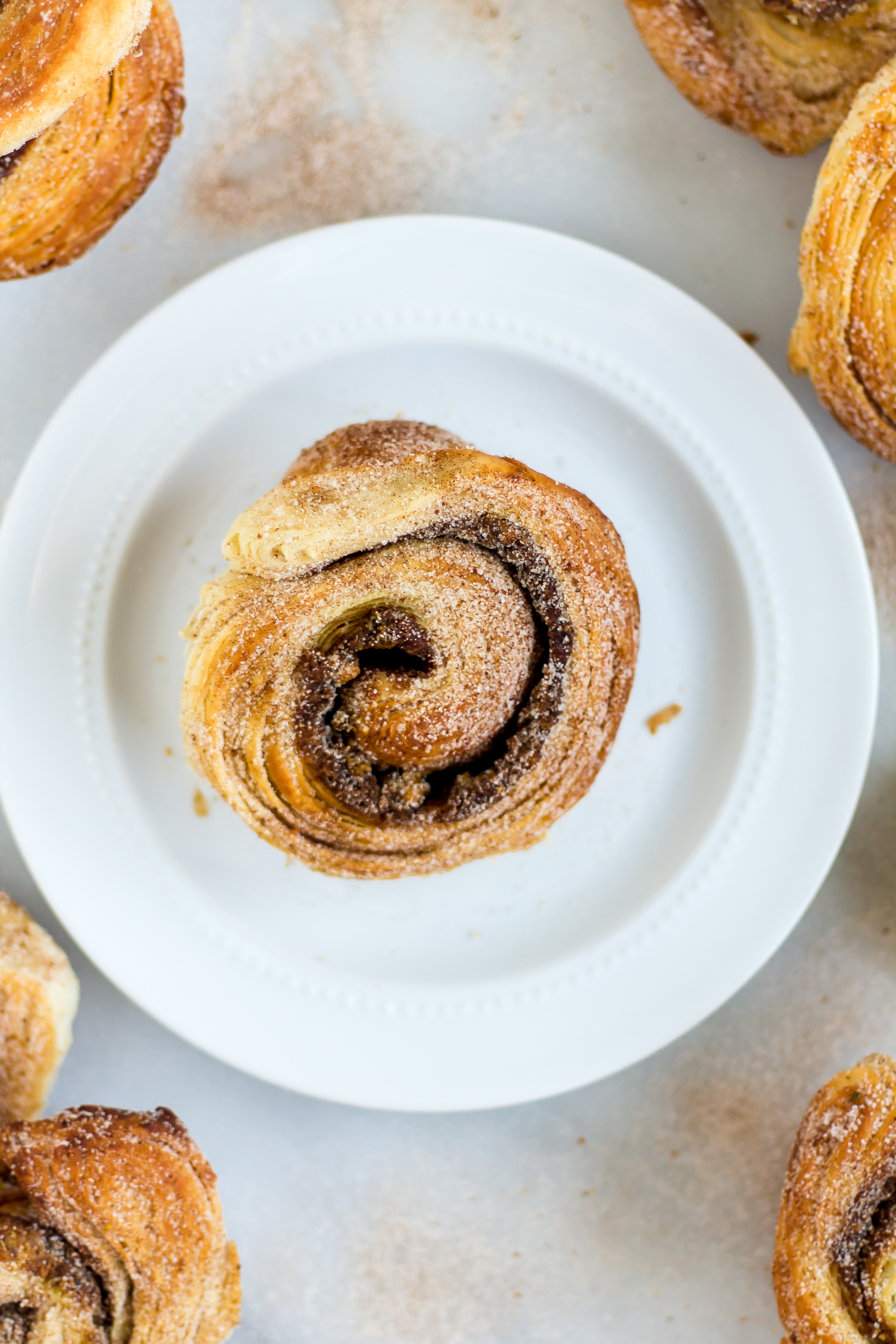 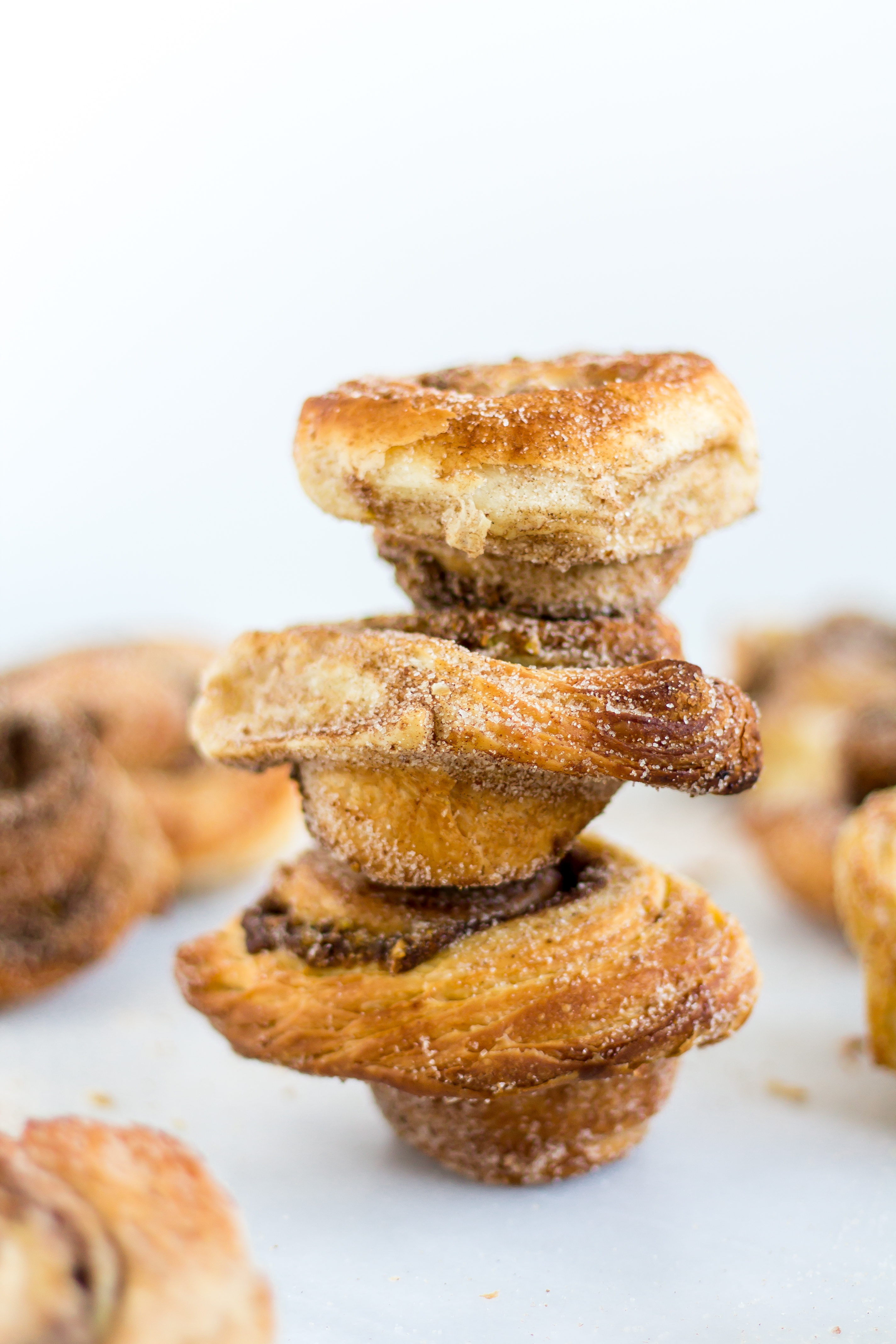 I love a good almond croissant, but wanted a version for this fun, flaky, muffin-shaped breakfast treat. With a few tablespoons of yeast, some crushed pistachios, a lot of butter, and a bit of patience, these pistachio and cinnamon morning buns were born. I know this recipe is not for everyone; I get it. But, I also want to say that I had never made laminated dough before last year and even now have only done it twice, so I’m no pro either. I tried to make a quicker cheat version and it turned out so subpar to this version that I couldn’t even compare the two. Pistachio cinnamon morning buns take a while to make, but most of it is resting time and the end result is so so worth it. 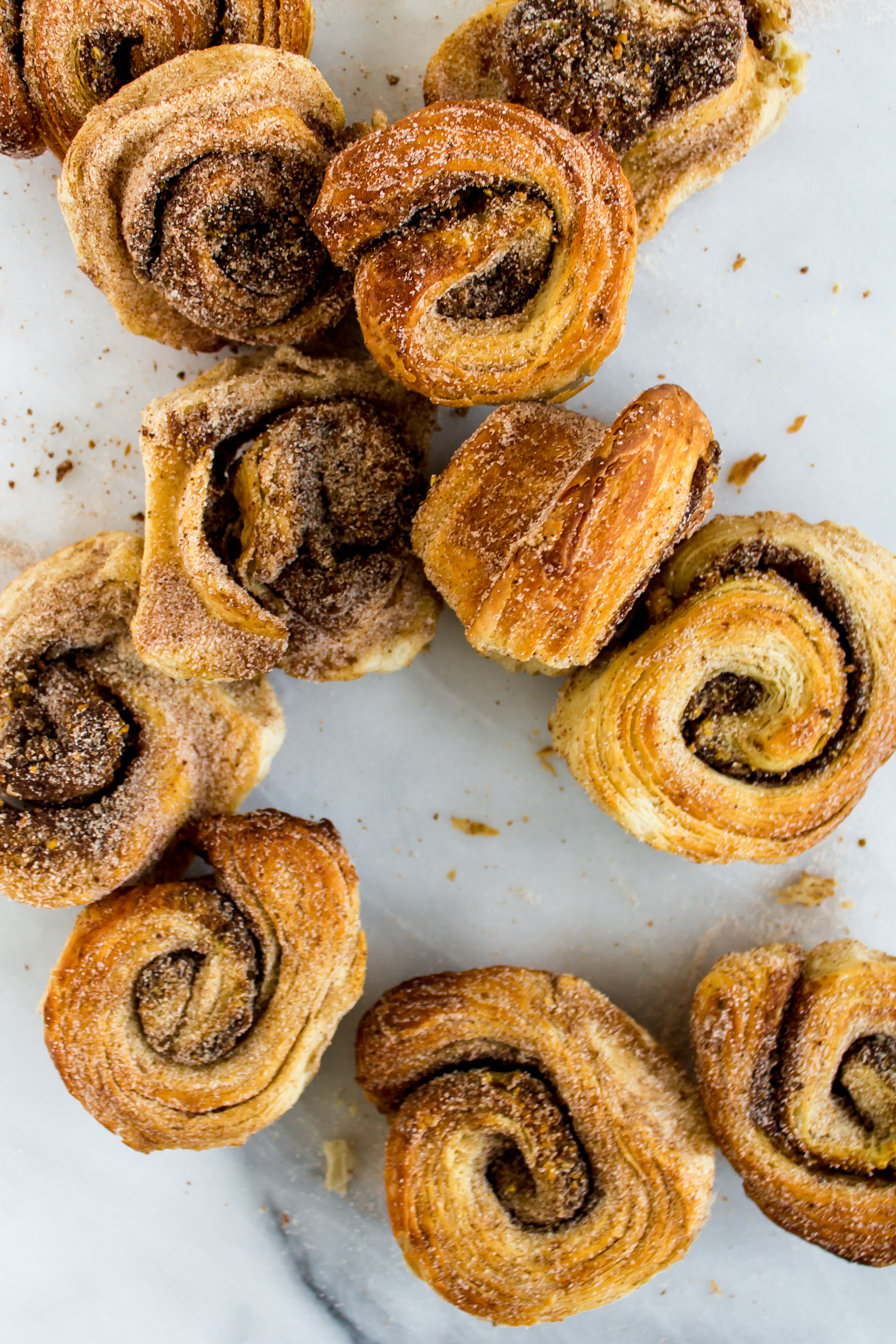 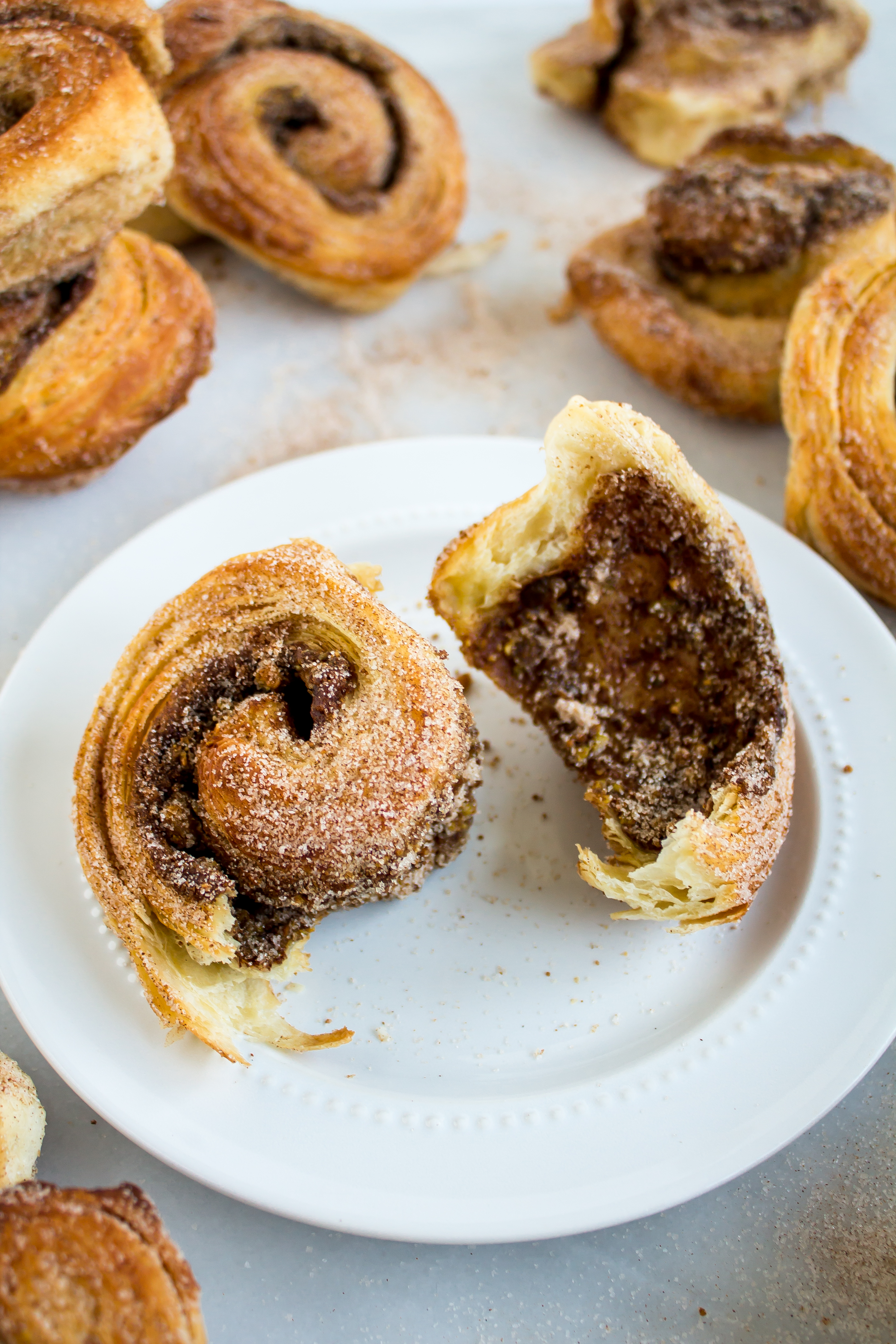 The buns are super flaky and coated in cinnamon sugar. Each layer is filled with crushed pistachios and more cinnamon sugar that melts a bit when it is baked. I brought these to share with my family the next day and everyone loved them, claiming they were the best morning buns they had ever had. 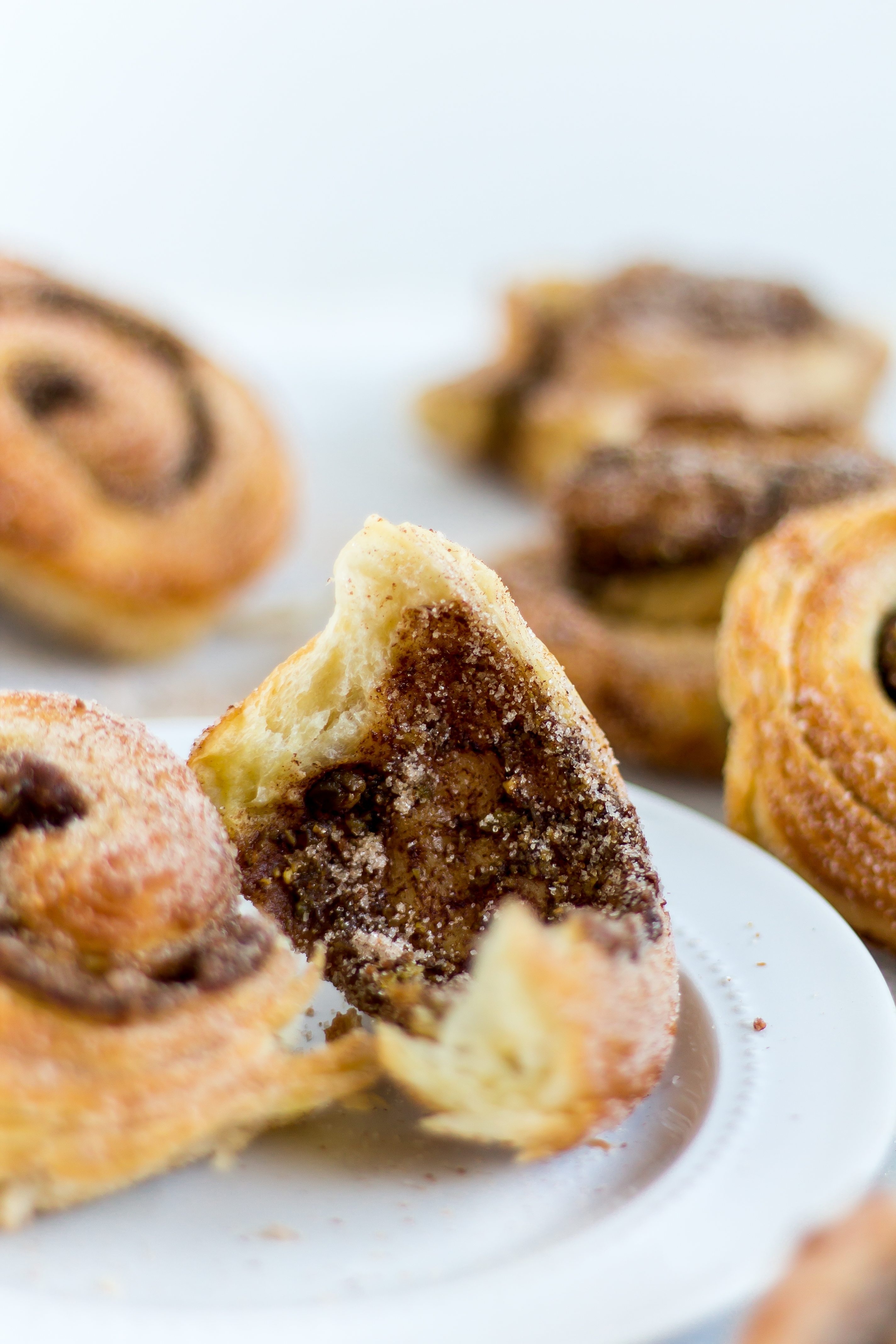 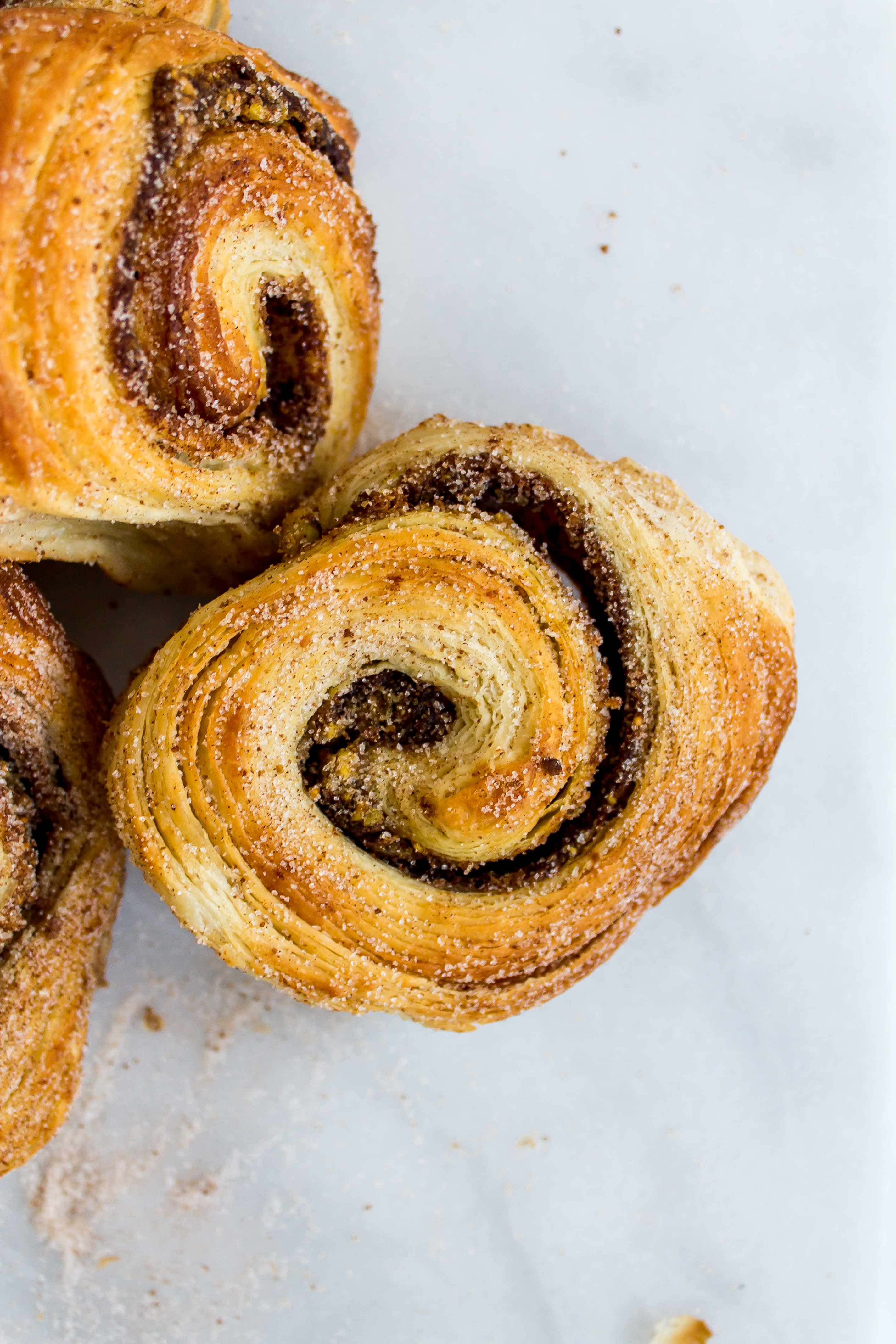 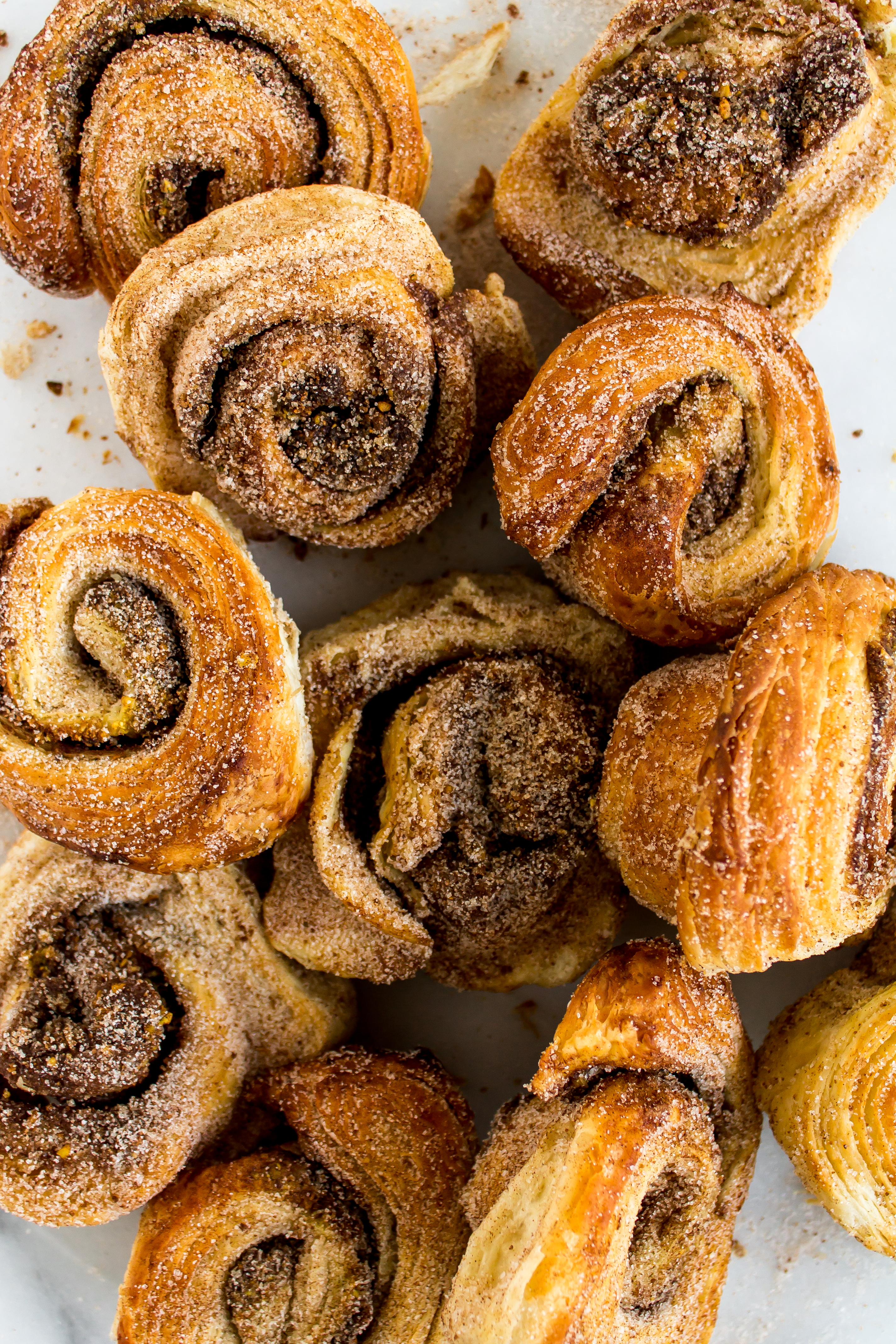 One great perk of this dough is that you can use a portion and freeze the rest for future use, so you only have to go through the laminating and rising process once for lots of future breakfast deliciousness. You can make a smaller batch immediately, then store the rest away for your next snow day, or for when guests come and you really want to impress them. I love the mixture of pistachio and cinnamon sugar, but you can play around and mix up the fillings with pecans, walnuts, or no nuts. For a fresh version, rub a little orange zest into the sugar mixture that you use to fill and coat the buns.

If you make this recipe, I’d love to see! Tag me on Instagram (@hopehwoodhouse) so I can follow along and envy your delicious creation.

To make the dough

In the bowl of your stand mixer, use a whisk to mix together the milk, egg, egg yolk, and yeast by hand. Add the flour, sugar, 3 tablespoons butter, and salt, and, using the dough hook, beat at a low speed until the dough comes together, about 1 minute. Continue beating until the dough pulls away from the sides of the bowl and is fairly smooth when a small amount is pinched off, about 5 minutes. Mine didn’t smoothen out entirely after I pinched it and it was fine.

Spray a large bowl with nonstick cooking spray. Transfer the dough onto a lightly floured surface, and shape it into a smooth ball. Place the dough in your prepared bowl, turning it to grease the whole ball. Cover the bowl with plastic wrap and let the dough rise in a warm, draft-free place (about 75°F) until doubled in size, about 2 hours. A trick I learned from my mother-in-law, the bread queen, is to put the bowl in the oven with the oven light on (do not turn the oven on). The light gives just enough extra heat and the oven door protects the dough from drafts in the kitchen.

Line a sheet pan with parchment paper and lightly dust with flour. Transfer your dough to a lightly floured surface, and gently shape it into a 10×8-inch rectangle. Place the dough rectangle on your prepared pan. Cover it tightly with plastic wrap, so the dough does not become dry, and refrigerate overnight.

After the dough has refrigerated overnight and you are ready to use it, place it in the freezer for 15 to 30 minutes. While the dough freezes, let the refrigerated butter block stand at room temperature until malleable, about 10 to 15 minutes. You want to get them closer to the same temperature.

Lightly flour a work surface and roll you dough into a 16×12-inch rectangle. Unwrap the prepared butter block, and place it in the center of your dough, matching up the 12-inch side of the dough and the 12-inch side of the butter block. Fold the dough over your butter block, with the dough meeting in the middle. Press lightly to seal the dough around the butter block. Turn the dough 90 degrees, and immediately roll dough into an 18×12-inch rectangle. Fold it into thirds, this time like a letter with the dough overlapping in the middle. Turn it 90 degrees, and roll out again. Fold into thirds, again, like a letter. Wrap dough in plastic wrap, and freeze for 15 to 30 minutes. Roll and fold, letter-style, one more time. Wrap the dough in plastic wrap and refrigerate for 1½ hours.

You can also save the dough for later instead: wrap the laminated dough tightly in plastic wrap and freeze for up to 3 months. When you are ready to use, let it thaw in the refrigerator overnight.

To make the filling and assemble

Brush a muffin tin with about 2 tablespoons of melted butter. Dust the cups with sugar, tapping out any excess.

In a medium bowl, combine the brown sugar, granulated sugar, cinnamon, and salt.

On a lightly floured surface, roll your dough into an 18×12-inch rectangle.

Using a pastry brush, brush the remaining ¼ cup plus 2 tablespoons melted butter onto the dough. Sprinkle your cinnamon sugar mixture over butter, leaving a ½-inch border along one long edge. Top with crushed pistachios. Starting at the long side opposite the empty edge, roll the dough, jellyroll style. Use our floss trick to cut the dough roll into 1-inch rolls. Cut a long piece of unflavored floss. Take one end of the floss in each hand and slide it under the roll. Pull up and cross one end over the other without switching hands to tighten the floss across and through the dough at the same place to create your slice. Place the rolls in your prepared muffin cups, gently pressing down with your hand until the dough fills the bottom of the muffin cup. Cover and let rise in a warm, draft-free place (75°F) until the rolls have risen, about 45 to 60 minutes.

Bake the buns until they are golden brown, about 20 to 25 minutes. If the outside buns begin to brown halfway through baking, cover them with foil to prevent excess browning. Let the buns cool in their pans until they are just cool enough to handle, only about 10 minutes. Before they completely cool in the pans, remove them, and toss each bun in your cinnamon-sugar topping mixture. Let them cool completely on a wire cooling rack. Note: if you let them cool too long in the pan, the sugar will harden causing the buns to stick to the pan, which makes them much more difficult to get out in on (pretty) piece.

These are best when served the same day, but are also delicious toasted the next day.