Are you gearing up for Thanksgiving yet?  I was at the mall this weekend and saw Christmas decorations in stores, both for sale and for festivity. 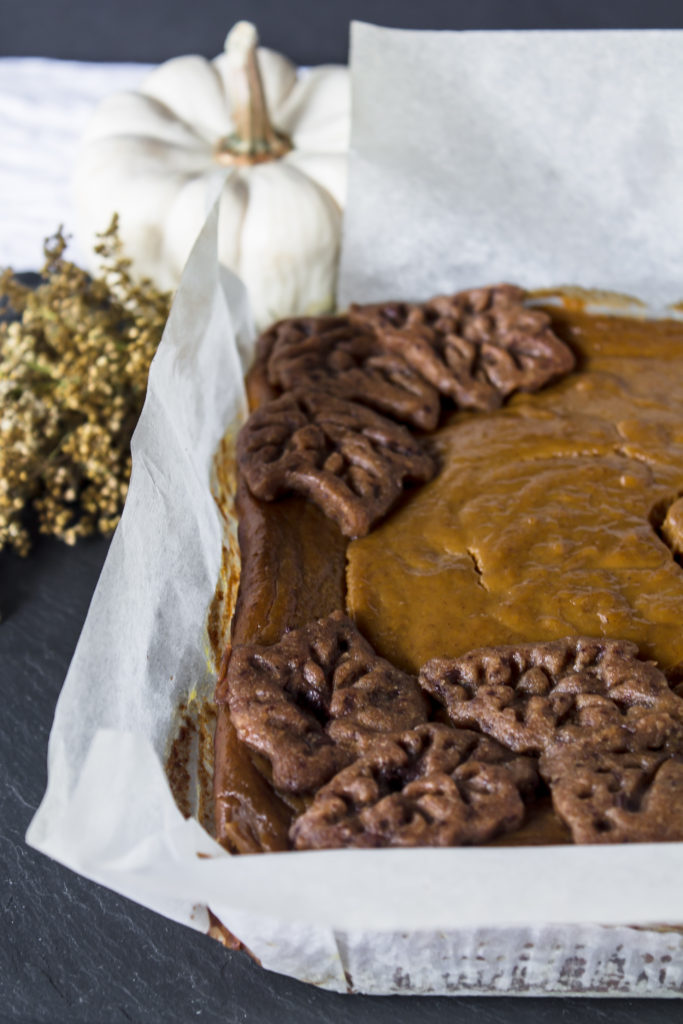 I’m halfway excited because I LOVE LOVE LOVE Christmas, but I also think Thanksgiving should have it’s time to shine.  My family has so many traditions associated with both Thanksgiving and Christmas, and since Will and I have been married, we have made a few traditions of our own and begun to incorporate some of his family traditions into our holidays.  One of my favorite parts of Thanksgiving is that we get to see family, no matter whose side we visit that particular year.  We love catching up with relatives, helping out in the kitchen, talking over a big dinner, singing Christmas carols while we wash the dishes and relaxing by a fire and maybe watching a football game or parade as we enjoy each other’s company. 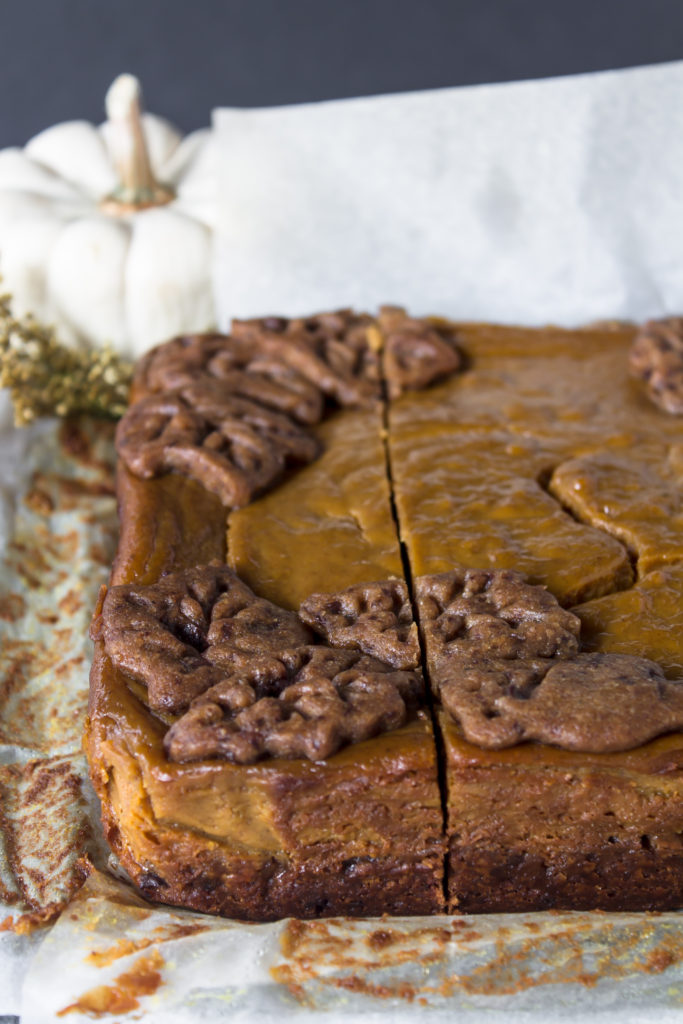 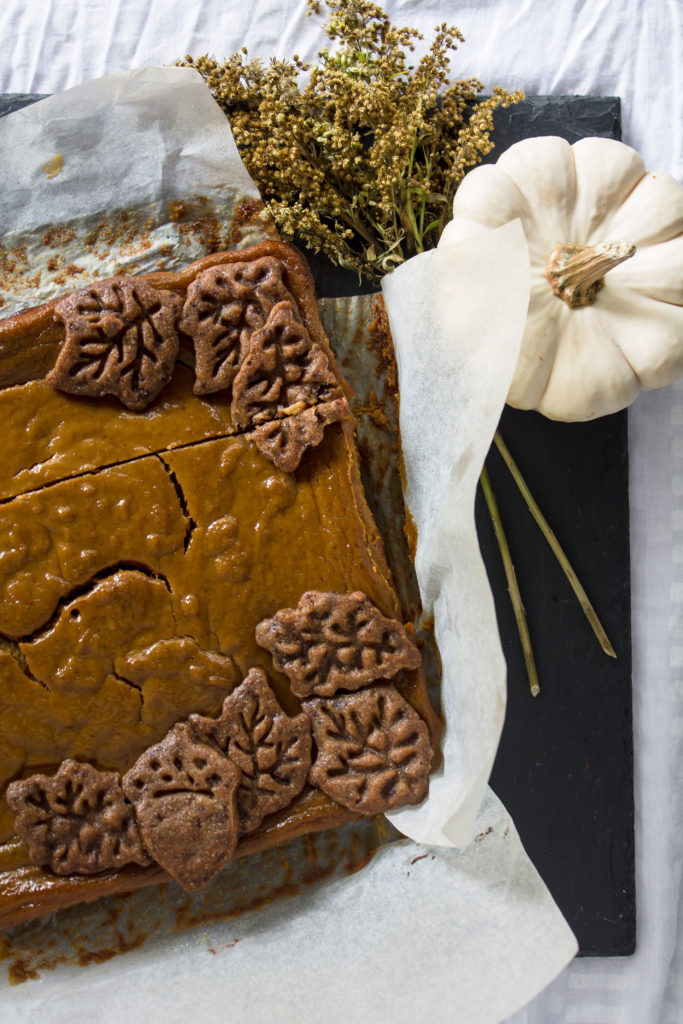 The bars absolutely have the flavors of fall but, just like the mall decorations, the gingerbread crust is just enough on the edge of the seasons for you to remember that Christmas gingerbread cookies are also on their way. You might be thinking you want to skip the chocolate in the gingerbread crust. Don’t. It sounds strange, but chocolate (especially dark) goes really well with gingerbread, and is always a great pair with pumpkin. 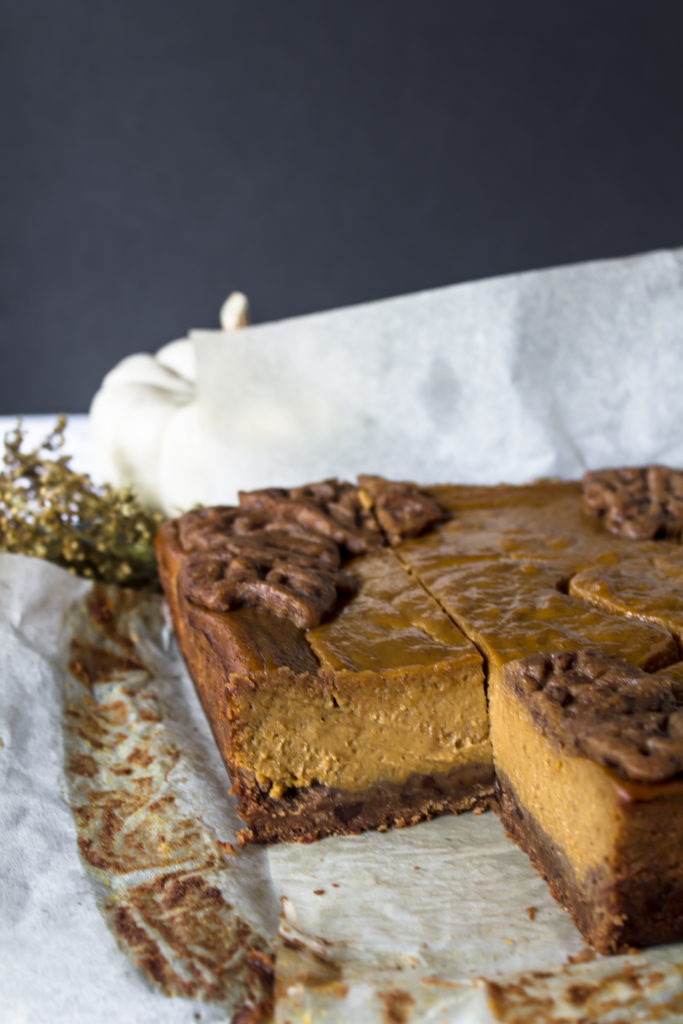 The gingerbread and the pumpkin play off of each other in both flavor and texture. The sweetness from the filling and spice from the crust pair magically. The soft, smooth custardy texture of the pumpkin pie filling gives way to a shortbread-textured, chocolate chunk studded crust. Top it all off with some fluffy homemade cinnamon whipped cream and you’re in Thanksgiving dessert heaven. 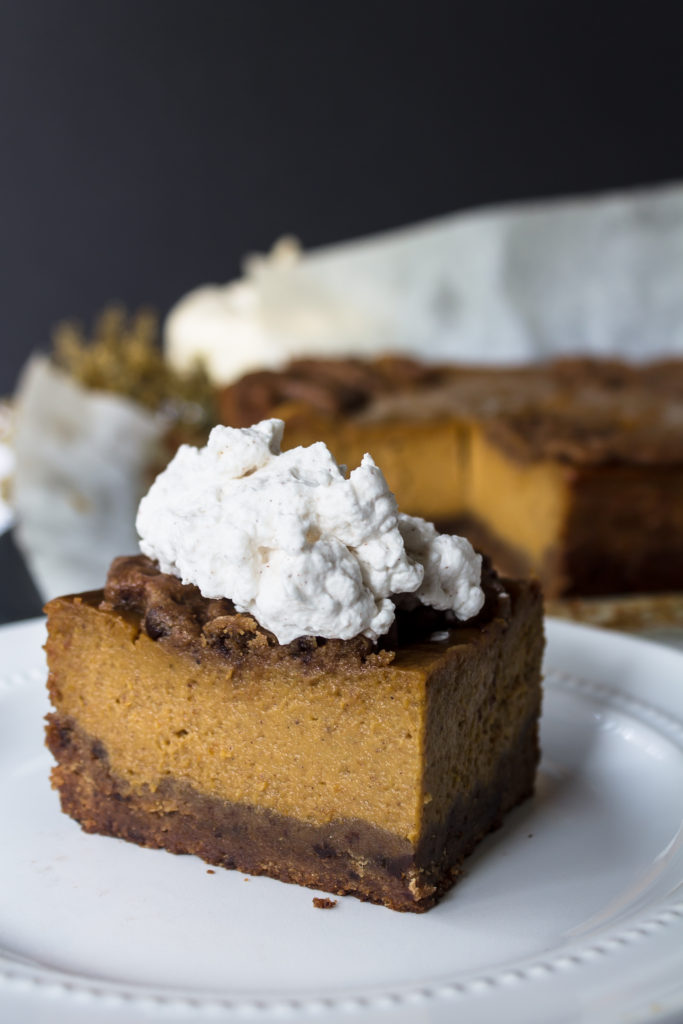 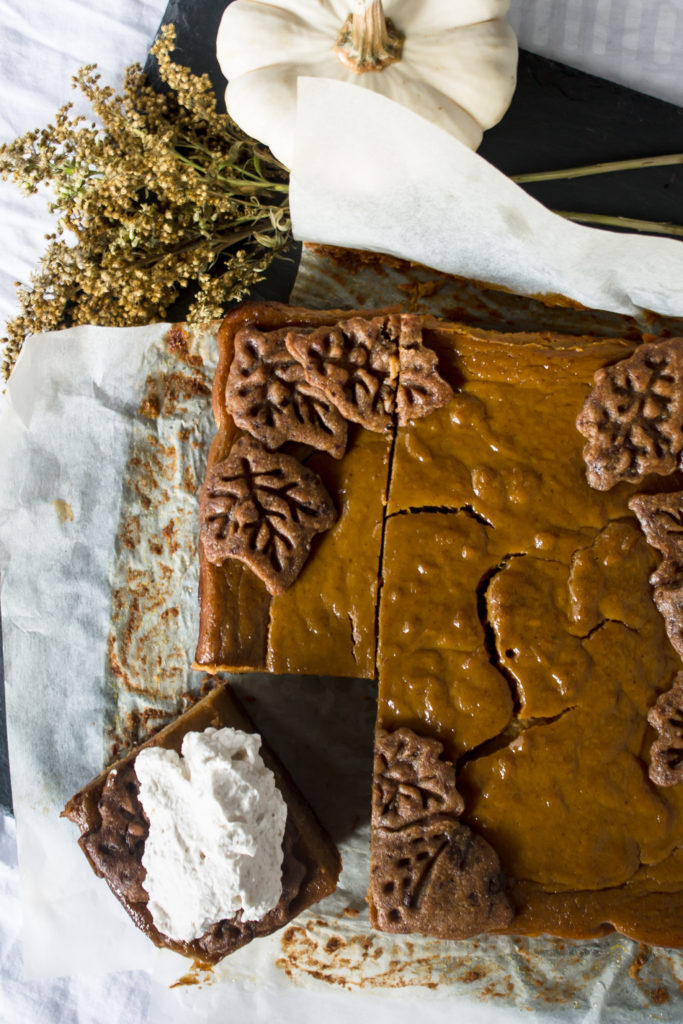 The chocolate chip gingerbread crust can be made weeks in advance and kept in the freezer or refrigerator. Pull it out and let it thaw (if frozen) enough to press into the pan and you’re good to go for a less stressful dessert on the big day! The bars themselves can be made a few days before they are served, but if you make them too early the filling begins to make the crust softer. They are still good if this happens, it just isn’t preferable.

Note: you won’t use all of the gingerbread dough for the crust. You can use the extra dough to make pretty cut outs for the top of the bars. To do this, roll extra dough into a thin sheet and cut your desired shapes. Place them on the top of the bars about 5 minutes before the bars finish baking. If you have leftover dough after that or don’t want to use as many cutouts, freeze or refrigerate the rest and you can make cookies with it later!

To make the Chocolate Chip Gingerbread Crust:
In the bowl of an electric mixer, cream together butter and brown sugar until light and fluffy, about 3-5 minutes. Beat in the molasses until it is incorporated and the color is uniform. Add the flour, ginger, cinnamon, allspice, ground pepper and salt to the bowl and mix until fully incorporated. Add the chopped chocolate and mix until it is evenly distributed throughout the dough.

Press the dough into a disc and wrap in plastic wrap. Chill in the refrigerator for about 1 hour, or until firm. The dough can be made days, or weeks, and stored in the fridge (or freezer for longer amounts of time).

Place a piece of parchment paper in an 8×8 square pan, or a casserole dish if you like thinner bars. Once the dough is chilled, press the dough into the bottom of the pan until you it is about ½-inch thick. Chill the rest for future use or make cutouts for the top, as described in the note above.

To make the Pumpkin Pie Filling:
Preheat the oven to 400 degrees F.

In a medium saucepan, combine pumpkin puree, sugar, salt, cinnamon, ginger, cloves and nutmeg over medium heat. Allow the mixture to sputter (or simmer) and continue to cook for about 5-8 minutes. Stir regularly. Add the pumpkin puree and combine with heated ingredients. Whisk in cold cream until the mixture is smooth. Whisk in eggs, one at a time.

Pour the filling on top of the gingersnap crust. Bake for 15 minutes, then reduce the heat to 350 and bake for another 35-40 minutes, until the center of the bars just barely wiggles and a toothpick inserted into the center of the pan comes out clean.

Let the bars cool completely in the pan on a wire rack.

To make the Cinnamon Whipped Cream:
In the (clean) bowl of an electric mixer, whip the cream until it holds a soft peak. Add the sugar and cinnamon (both to your taste) and vanilla, if using, and continue to whip until the whipped cream holds a stiff peak.

Cut the bars, add a dollop of whipped cream, and enjoy!