Do you ever get stuck in a meal planning rut? I try to find great seasonal recipes for our dinners, but by the end of the season I often feel like we’ve made the same recipes over and over again. Don’t get me wrong, I love most of these recipes (otherwise, why would I keep making them), and summer fruits and veggies are the best for fresh meals, but sometimes it is hard to think of new ways to use the same ingredients week after week. Recently, I’ve noticed that tend to gravitate to the same few cookbooks that I know will reliably have great seasonal recipes, to spare me some brainstorming time and stress. There are recipes that I pull from other cookbooks or blogs to fill in the gaps, but these are the 5 cookbooks that I’m loving this summer, and where I have been getting most of our dinner recipes. They are all vegetable heavy and filled with great fresh recipes to make all season long. 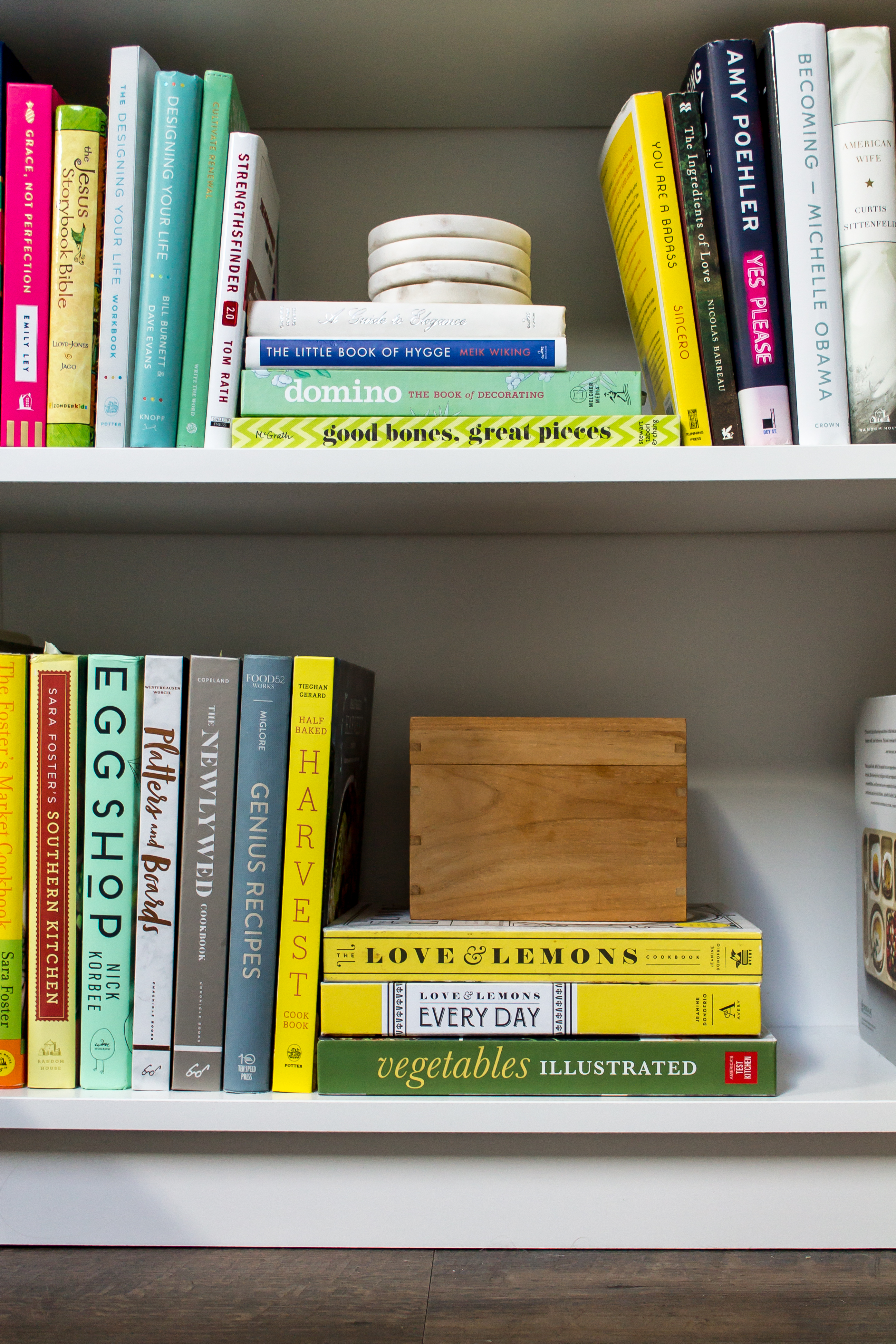 Love and Lemons by Jeanine Donofrio of the blog Love and Lemons
We love this cookbook so much that throughout the past few years, we have gifted it to different members of the family who, in turn, gifted it to their friends and other members of the family. Now, my brother, sister, parents, and I all have the cookbook and share recipes that we love or text about new recipes we tried that evening. The cookbook is uniquely set up in sections by ingredient, rather than by type of meal, which makes it great for seasonal eating. I can look in the squash section or the tomato section if we have an abundance of those that week, or pick a recipe from the corn section if I know there is a good crop at the farmers’ market. There are so many great recipes that it’s hard to go wrong with this one.

Love and Lemons Every Day by Jeanine Donofrio of the blog Love and Lemons
Jeanine’s second cookbook just came out in April of this year, and it has already earned its place on our bookshelf. Unlike the first Love and Lemons cookbook, this one is arranged into the traditional chapters by type of meal. While I loved the first one, it is nice and easy to find dinner recipes or an appetizer idea. I especially love the salad section, complete with a giant visual grid of homemade salad dressing ideas and recipes. Since it has only been out for a few months, we haven’t had the chance to cook through the other seasons yet, but there are so many recipes that look good for fall. 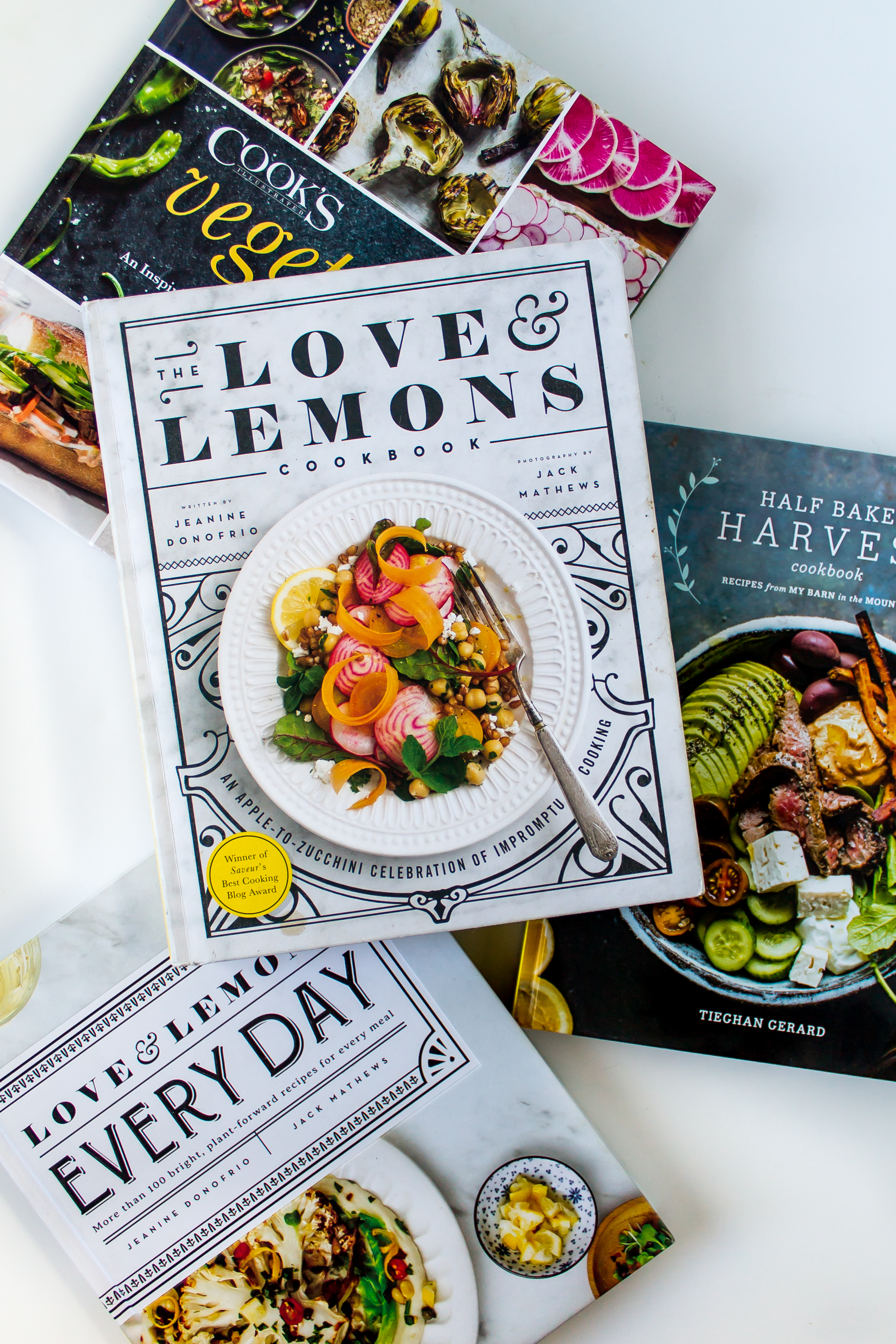 Half Baked Harvest by Tieghan Gerard of the blog Half Baked Harvest
When we were in the middle of moving and unpacking, we picked up takeout dinner from a local Carribean food place. We got Cuban black beans as one of the sides and were shocked by how simple but delicious they were. Later that week, we realized there was a recipe for Cuban-style black beans with guacamole and plantain chips in the Half Baked Harvest cookbook sitting on our newly unpacked bookshelf! Having eaten out a lot during the moving process, we spent our anniversary, just a few days later, making all of the parts of this recipe. I had previously tried some of Tieghan’s cold weather recipes (hailing from the mountains of Colorado, she knows her way around fall and winter food), but after that we were hooked and scoured the book for all of the summer recipes too. In exciting news, she has a new cookbook coming out at the end of October all about super simple meals.

Love Real Food by Kathryn Taylor of the blog Cookie and Kate
As with the previous three, I have read Kathryn’s blog, Cookie and Kate, for years. We were checking out our local library and getting new library cards (what better way to feel like a local?) and on a whim I decided to check out her book, Love Real Food. I had been eyeing it for a while, but hadn’t had a chance to glance through it to see what the recipes were like until then. No surprise, it was packed with great vegetable-forward recipes, many perfect for the summer. I made a list of all of the dishes I wanted to try and over our three weeks with the loaned book, we worked our way through some of them. Each one was delicious and I immediately put the book on my gift list. I wanted to renew the book to keep cooking out of it, but someone else had the same great taste and put it on hold before I could. Even though I had to return the book, you can be sure I’ll get my own copy soon.

Cook’s Illustrated: Vegetables Illustrated by America’s Test Kitchen
My thoughtful colleagues gave me this wonderful cookbook as part of a going-away gift when we moved and, as you would imagine from any Cook’s Illustrated cookbook, it has been amazing for great seasonal recipes. Like Love and Lemons, this cookbook is set up with chapters on each vegetable. It is chock full of recipes for every vegetable under the sun and filled with helpful tips for how to cook each ingredient, like making zucchini less watery or preventing your okra from being slimy. We have loved every recipe we have tried, and we’re just getting started. I’m sure this will be in heavy rotation as the seasons change, but it definitely is proving to be useful now while all of the summer veggies are plentiful.

What other cookbooks are you reaching for this summer? I always love trying new ones!