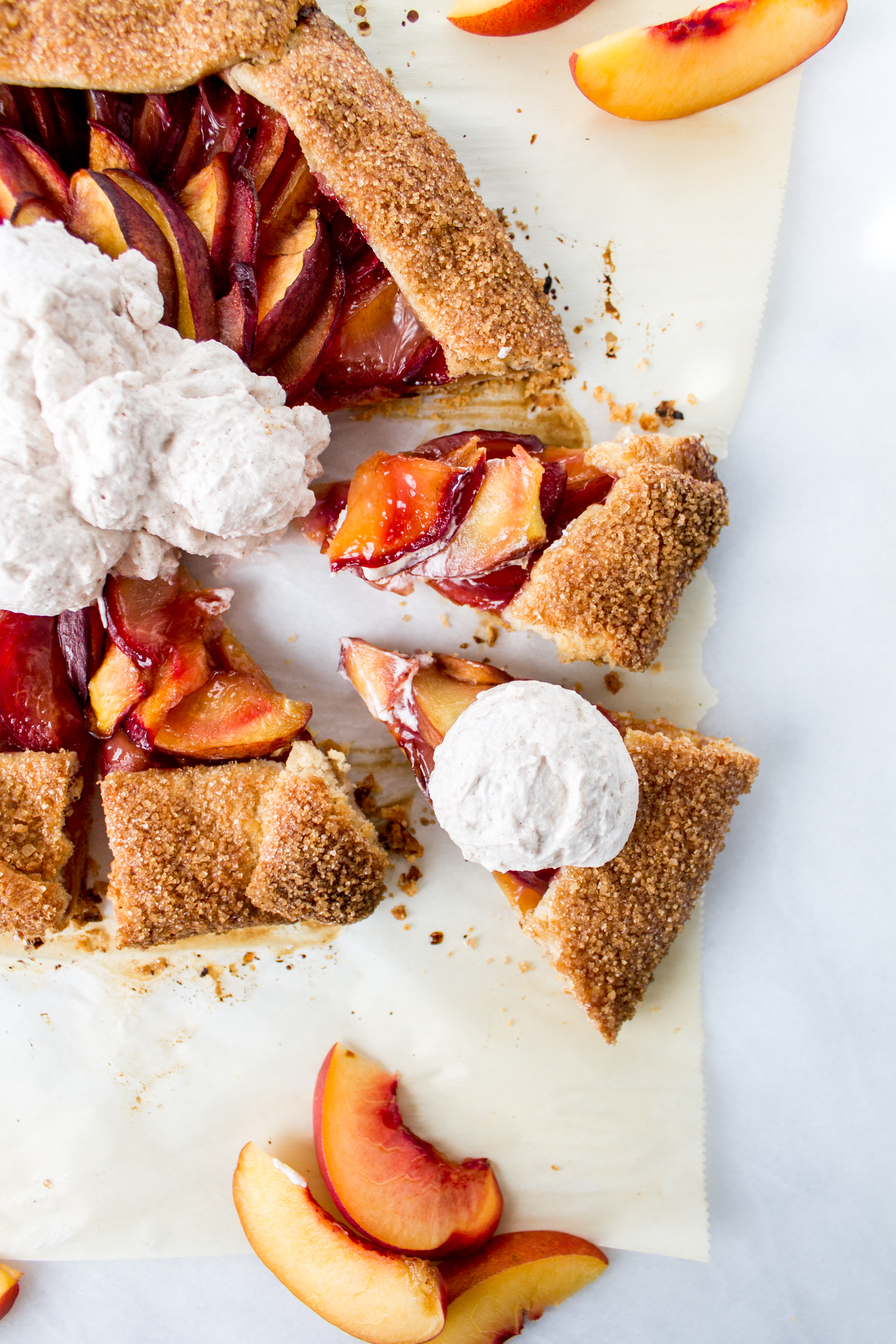 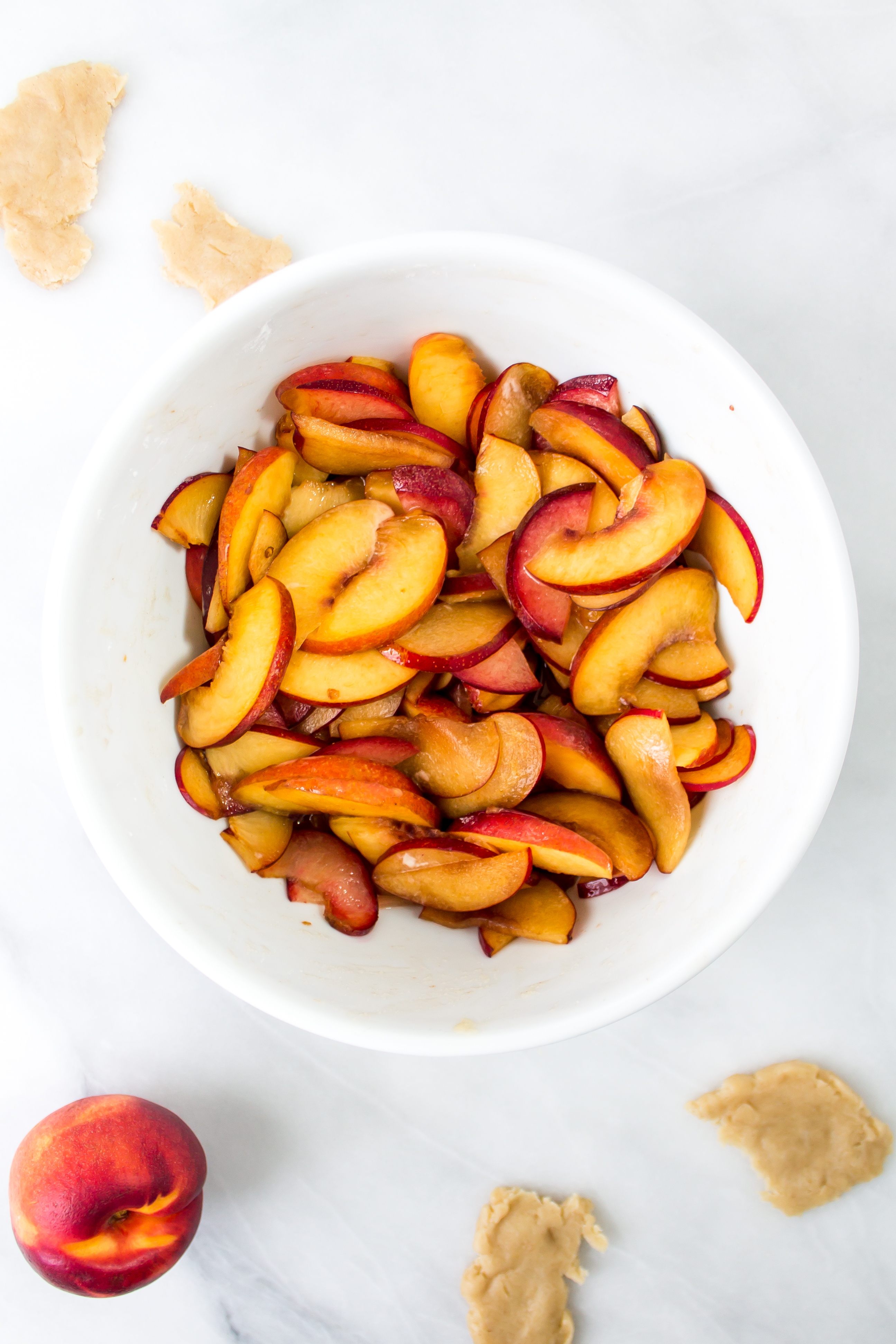 There are so many things to love about this plum and peach galette. It looks impressive, but is so simple and easy, and showcases the sweet natural flavors of summer. The buttery, flakey crust comes together with just a few pulses in the food processor. Then cut up some peaches, plums, pluots, nectarines, whatever your stone fruit of choice this week, and mix up all of the filling ingredients in a big bowl. We top the chilled dough with generous layers of fruit and fold it up – no fancy tools needed here. Don’t forget to coat the crust with coarse sugar to make it deliciously golden and crisp, one of my favorite parts. Top that bad boy with some fresh homemade cinnamon whipped cream, and you’ve reached summer dessert heaven. 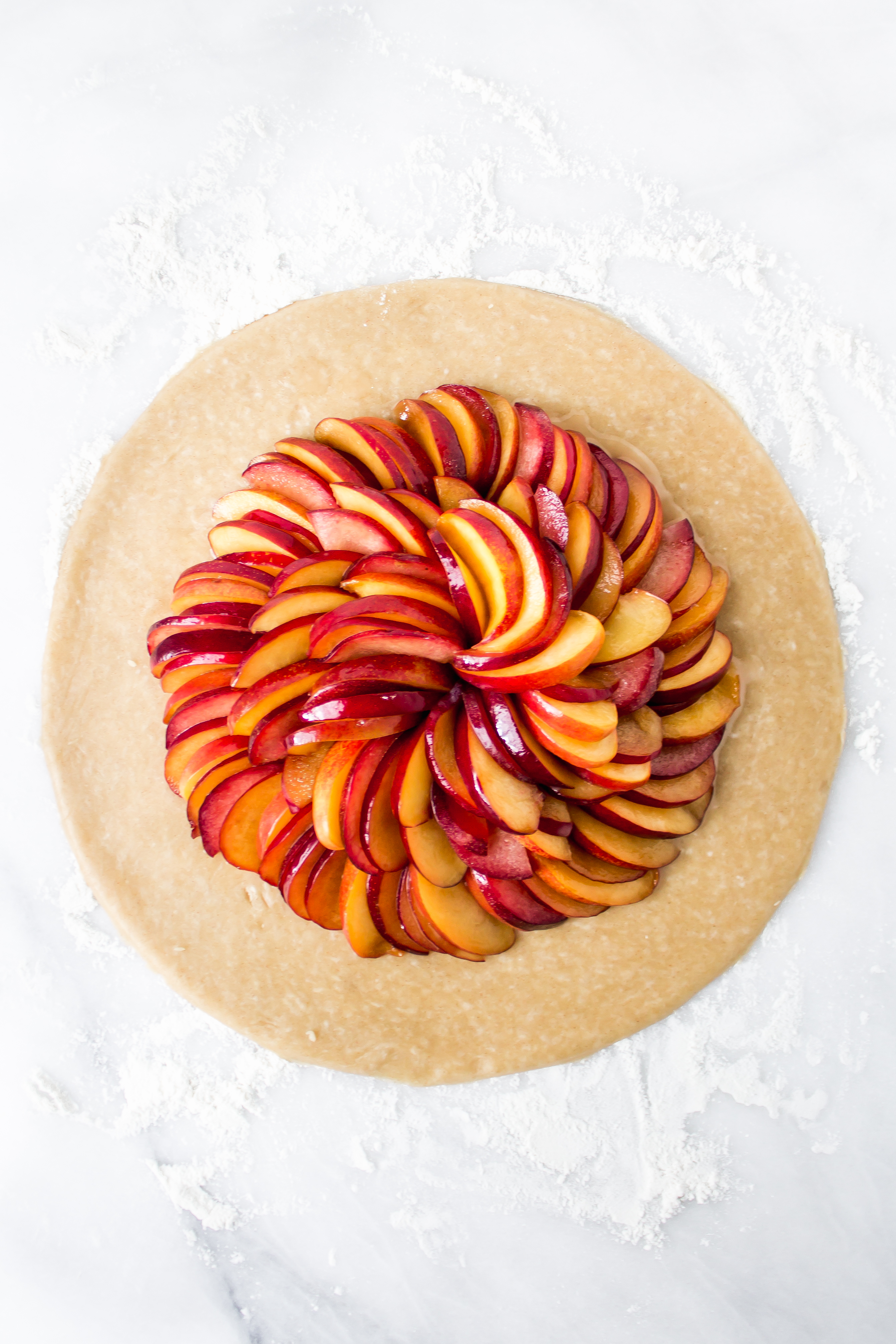 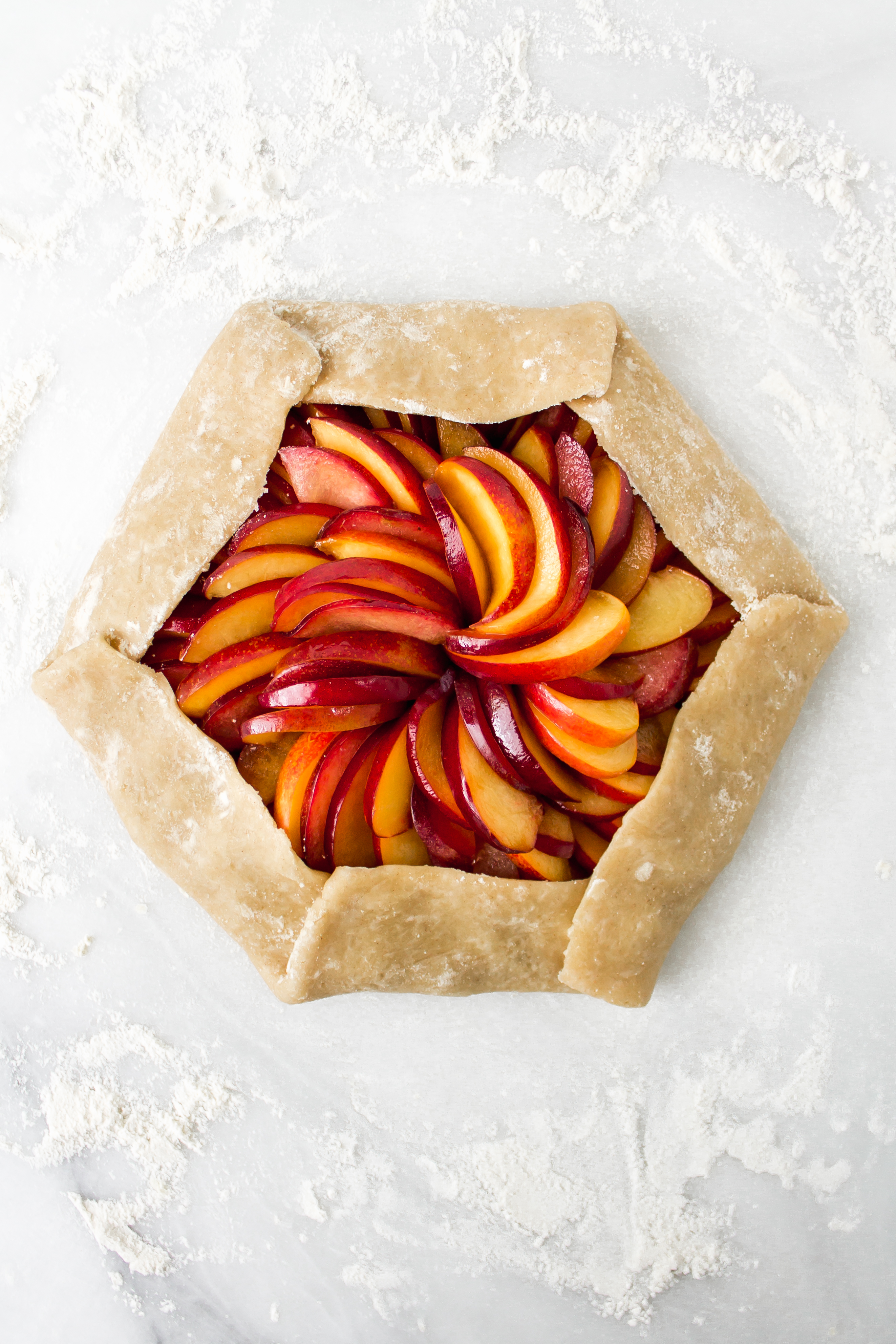 To really let the fruit and the buttery tart dough shine, the filling only has a few ingredients. The cinnamon whipped cream pairs so well with the flavors of the fruit. I can’t get over the combination of textures from the fruit, to the crisp edges of the crust, to the soft pillow whipped cream. Get a little bit of each in one bite and you won’t be able to deny another slice. 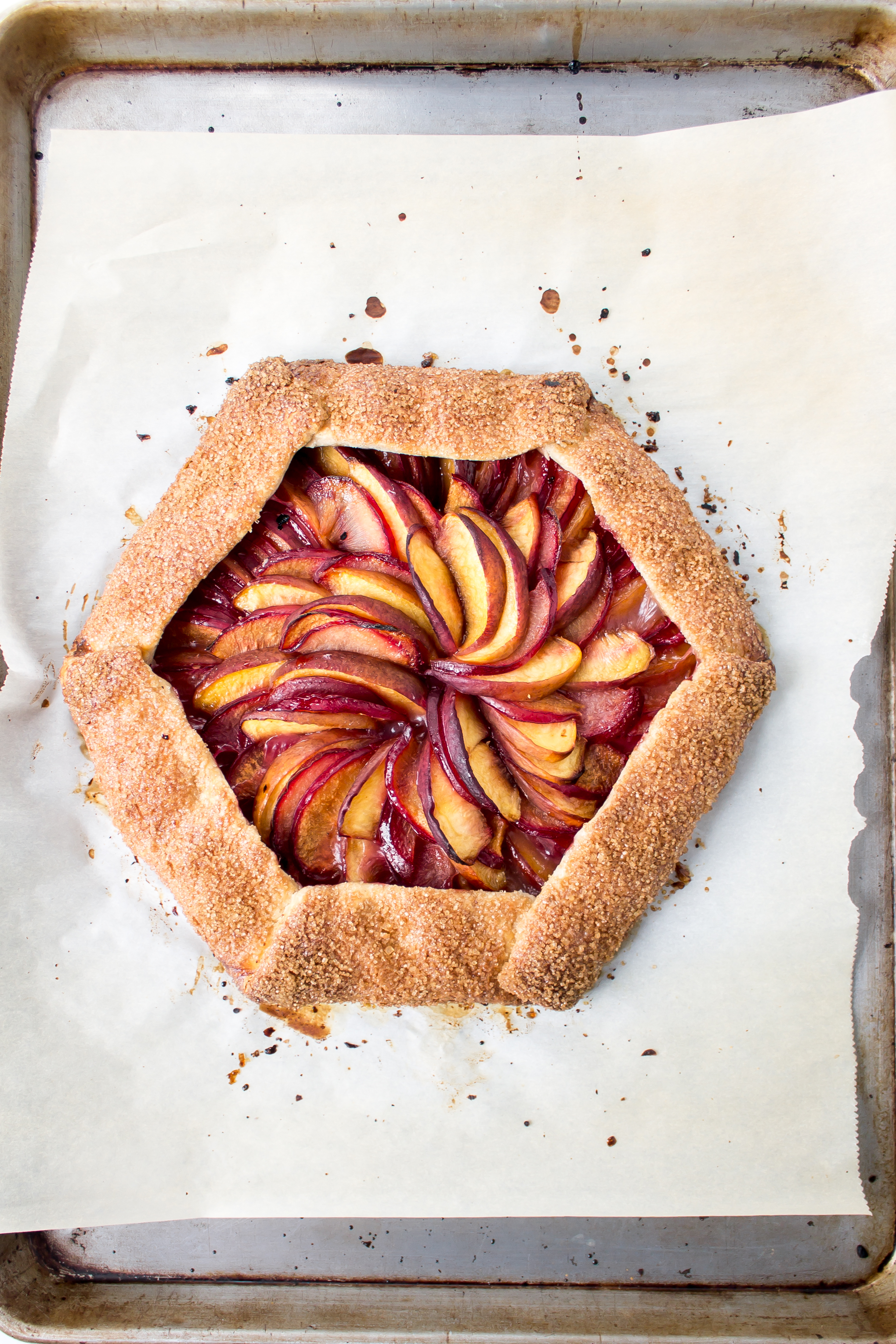 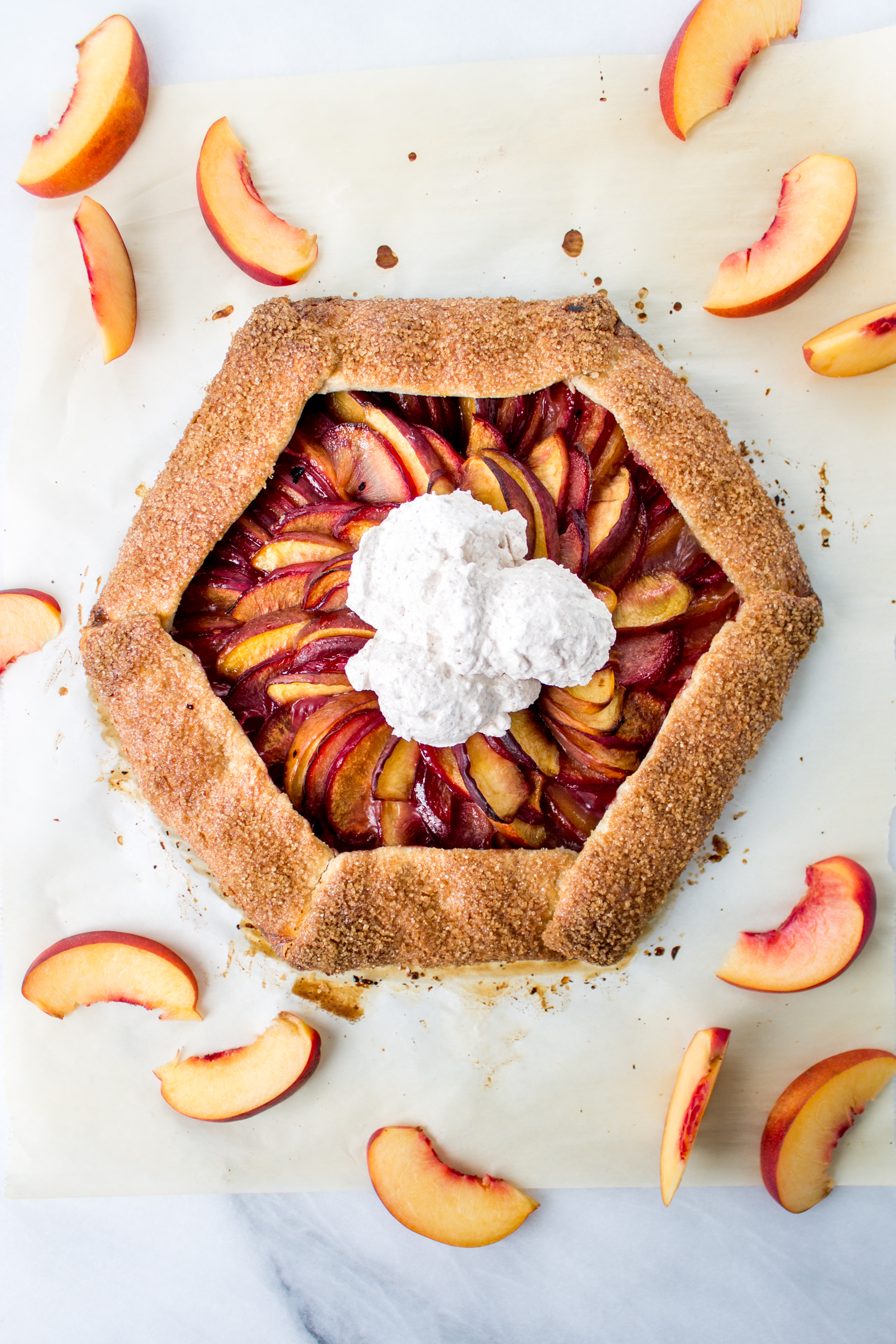 I have made a lot of pies, but haven’t tried many galettes before. I don’t know what took me so long, but now that I know how easy it is, I may forgo the pie dish more often. You will need to leave some time for the dough to chill (this helps the butter keep its shape and makes your crust super flakey), but this also gives you the opportunity to make the dough ahead of time and leave it in the fridge or freezer until you are ready to use it. 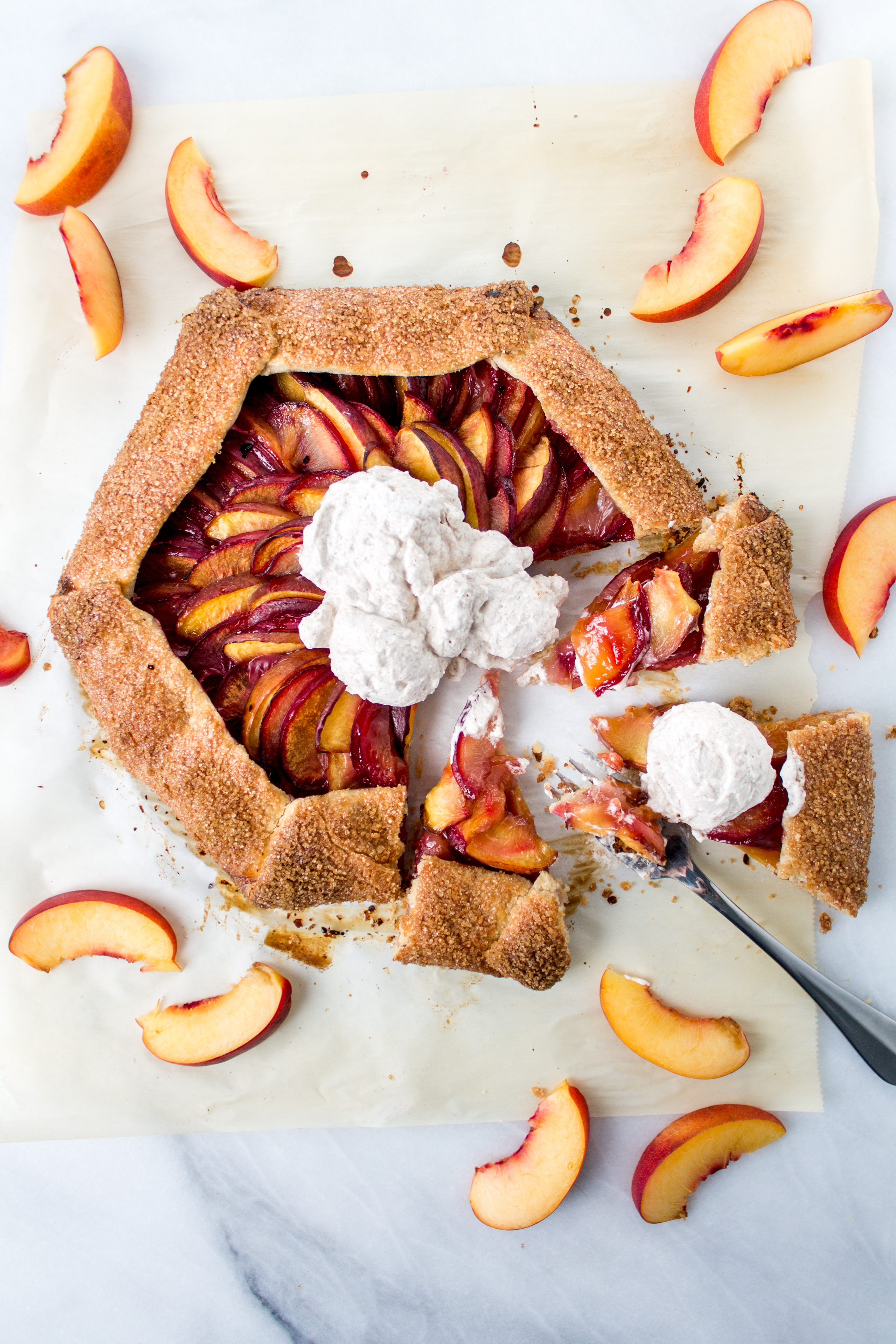 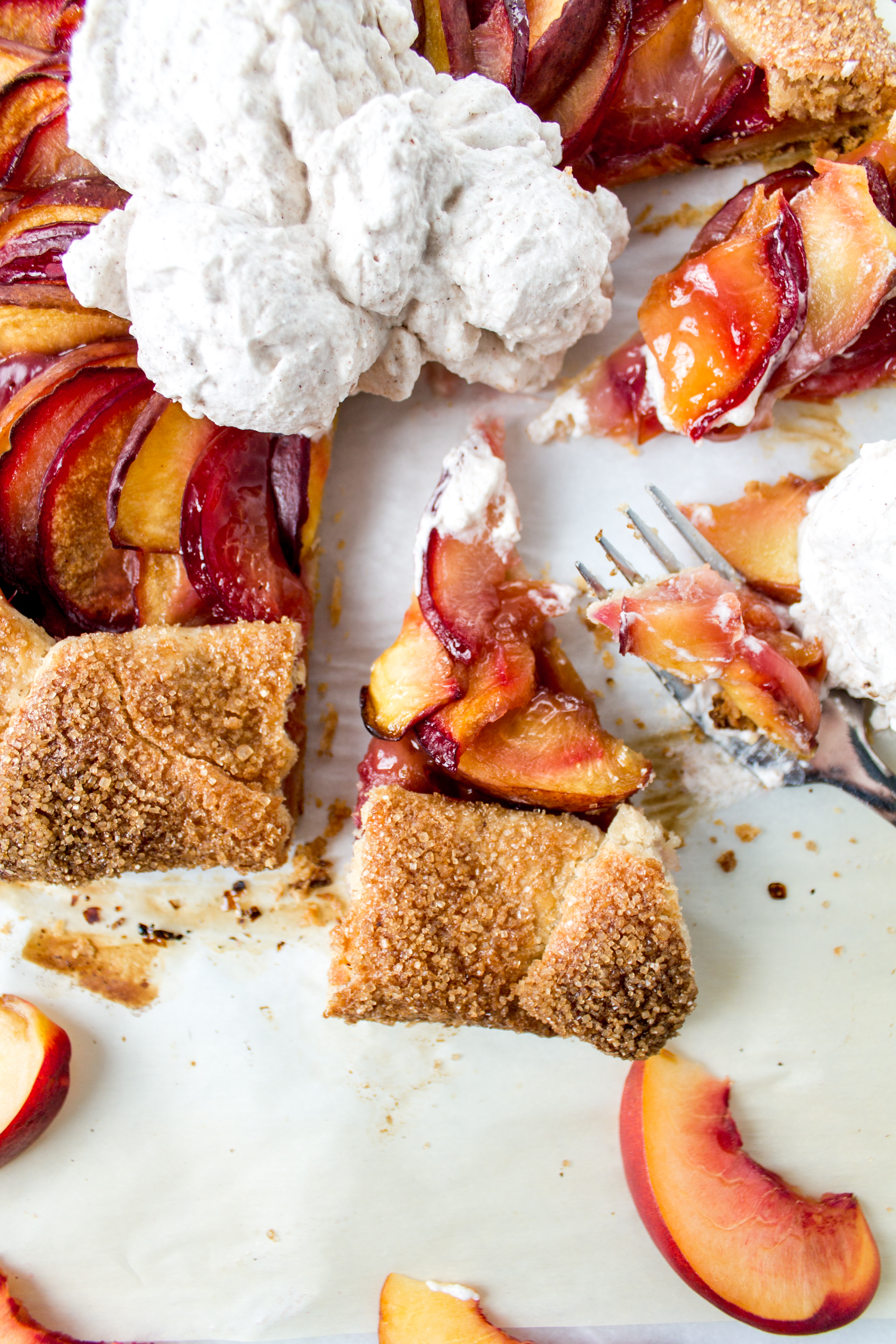 Delicious plum and peach galette with cinnamon whipped cream is the perfect easy, fresh dessert for the end of summer. Whip it up with your summer fruit and impress all of your friends.

In the bowl of a food processor, or by hand with a pastry cutter, pulse together the flour, sugar, salt, cinnamon, and ginger. Add the butter and pulse until your mixture resembles coarse meal. Some larger pieces are fine. Add ¼ cup water to the mixture and pulse or mix with a fork until the mixture just begins to hold together. If the mixture is too dry, add more water 1 tablespoon at a time, and pulse. Repeat this until the dough comes together.

Place the dough ball onto a piece of plastic wrap, press it into a disk with your hands or a rolling pin, wrap in the plastic wrap, and refrigerate for about 1 hour, or until firm.

Preheat the oven to 400 degrees F. Line a baking sheet with parchment paper and set aside.

In a large bowl, combine your sliced stone fruit (I used peaches and pluots here). Add the vanilla and stir.

In another bowl, mix together the sugar, cornstarch, salt, and ginger. Pour the dry mixture over the fruit and toss to coat each piece.

Remove your dough from the fridge and roll it out until it is about ¼-inch thick. Galettes are very forgiving, so your shape doesn’t need to be perfect. I cut the edges of mine to give it a more sleek finish, but you can leave the edges rustic as well and it will taste just as delicious. Place the dough on your parchment-lined baking sheet. Leaving a 2-inch border of crust uncovered, layer your fruit in the center of the dough. Leave any excess liquid in the bowl. If you add it to the galette your crust will get soggy. Once all of your fruit is placed, fold the crust over it to create your galette edges. Sprinkle the crust with turbinado sugar (you may need to press it into the dough to help it stay).

Bake for about 40-50 minutes, or until the crust looks golden and the fruit is cooked and syrupy. Beware that the turbinado sugar can make the crust look golden before the crust is actually done. Check for the golden color of the dough underneath the sugar before you take it out. Let cool a bit before serving with a big dollop of cinnamon whipped cream.

In the bowl of a mixer, whisk together the whipping cream until soft peaks form. Add in the vanilla, sugar, and cinnamon and whisk again. Taste and add more cinnamon and/or sugar to taste. Continue to whip it until stiff peaks form.