It’s the week before Thanksgiving, aka Thanksgiving menu prep week! Start rolling your pie dough, because you won’t want to miss the two pies I’m sharing this week, starting with a chocolate chess bourbon pecan pie! 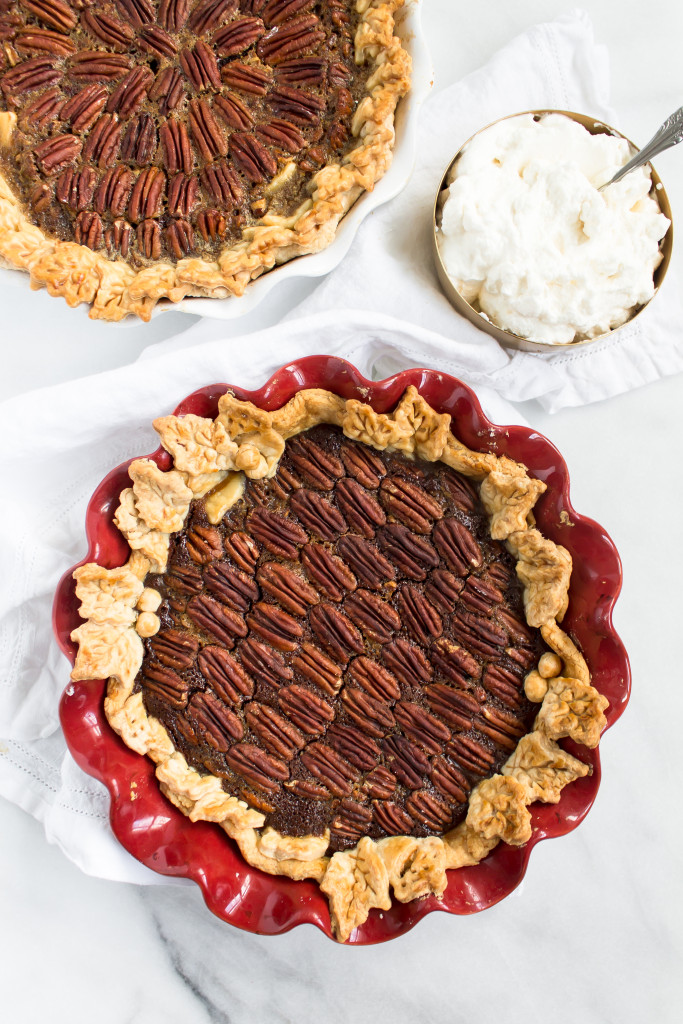 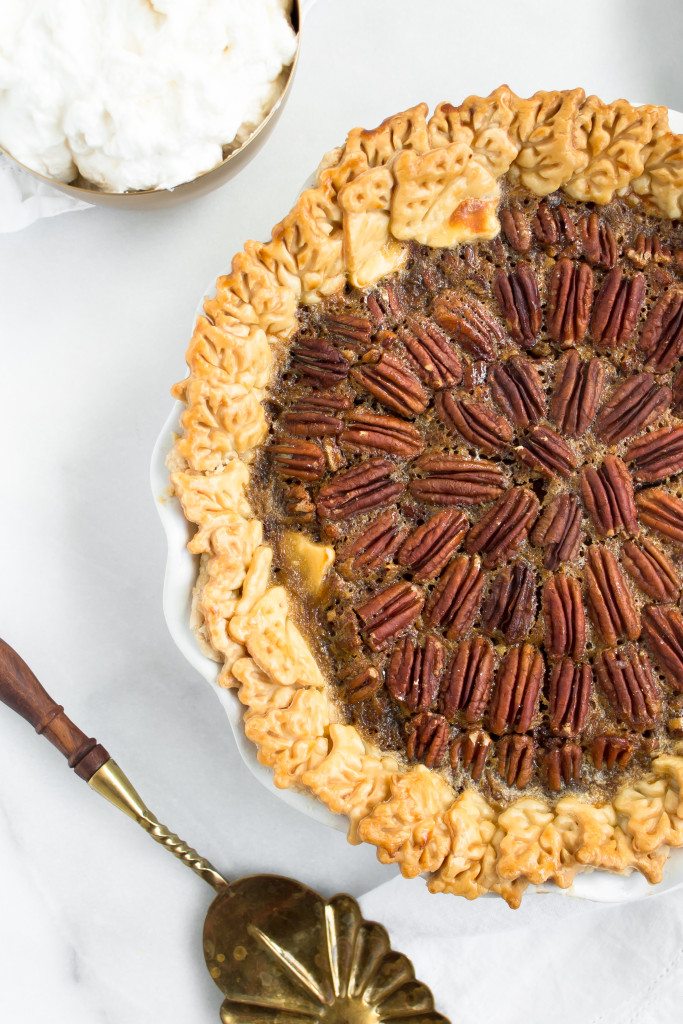 Like most people, our family’s Thanksgiving meal is pretty much the same every year. Though we stick to a traditional dinner menu, the desserts can change. Some years we have a fall cake (this one, this one, and this one are in the running this year), but no matter what, there is always a pie of some sort. Pumpkin pie and apple pie are the usual culprits, but my mom’s chocolate chess pie and a bourbon pecan pie we have made for years are my two favorites. Earlier this month I thought, if chocolate chess and bourbon pecan pie are my favorites, why not combine them for the best of both pies?! The mash up that resulted is amazing! 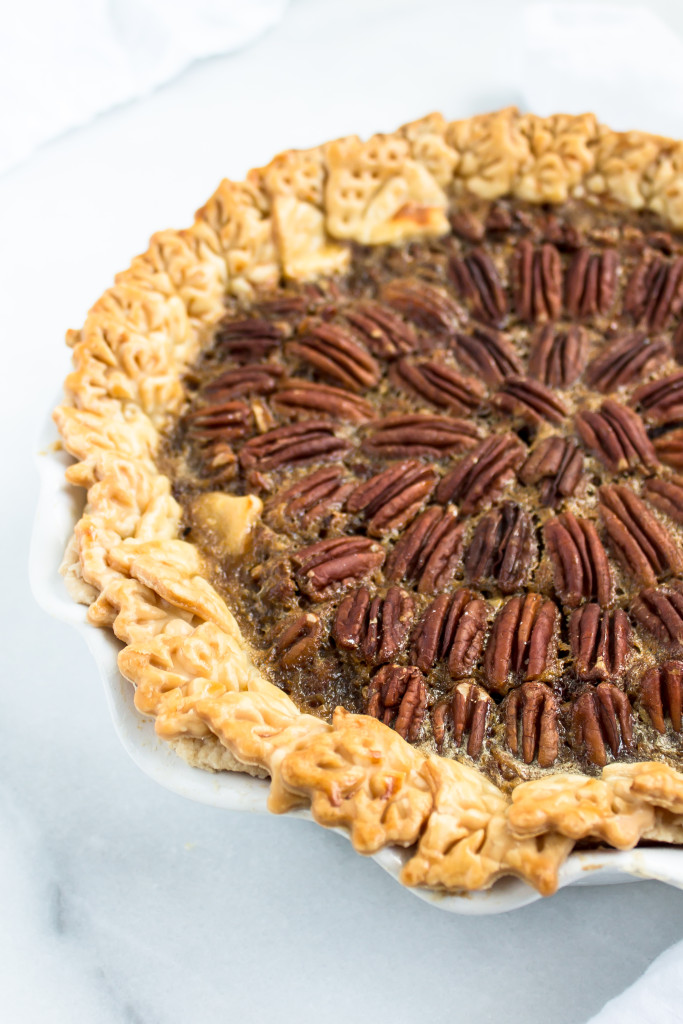 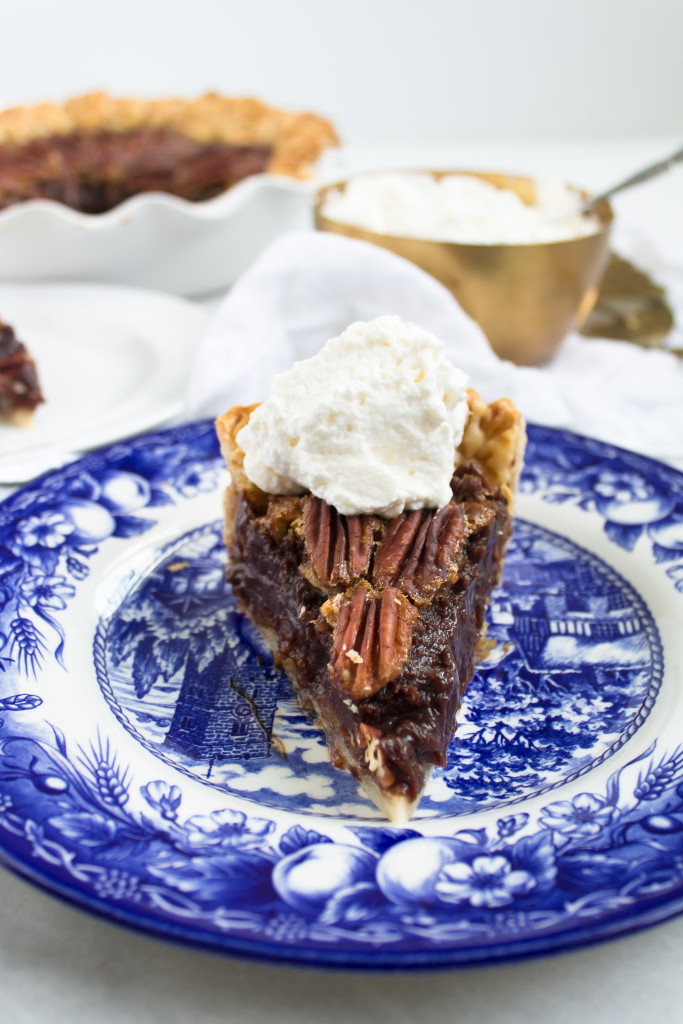 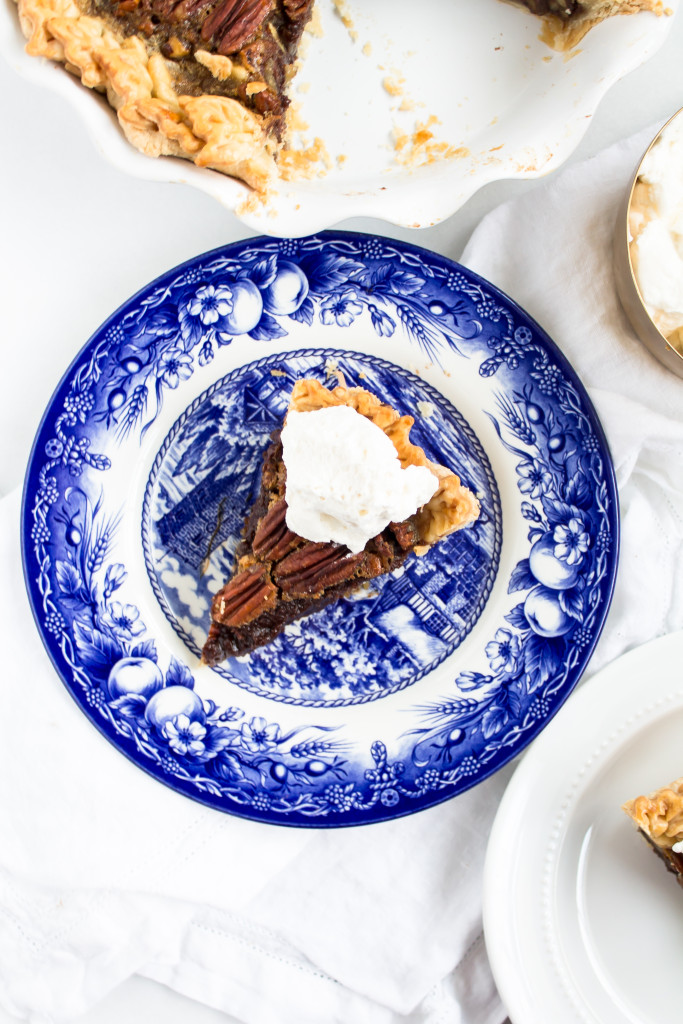 Growing up, chocolate chess pie was a staple in our house when guests would come. It is rich and delicious and always receives complements. The first year I spent Thanksgiving with Will’s family while we were still dating, I brought two of my mom’s chocolate chess pies to share. They were quickly demolished and I was instructed that whether or not I could make it to the next family gathering, those pies were welcome. I now bring them whenever I visit and it is so fun to see the pie that has so many memories in my family creating new holiday traditions and memories in Will’s family. 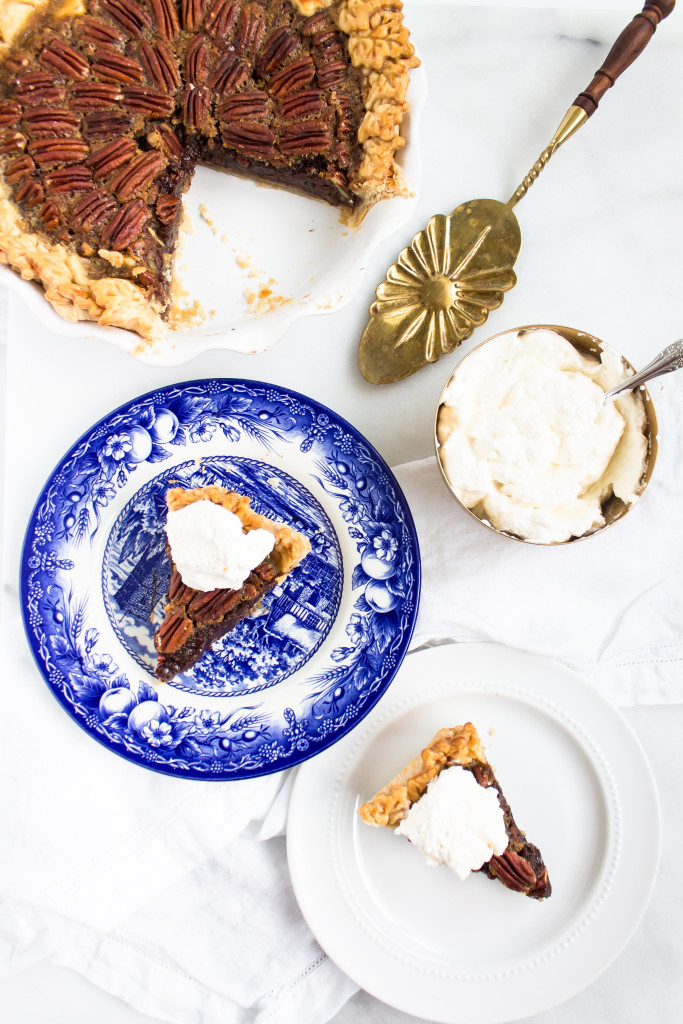 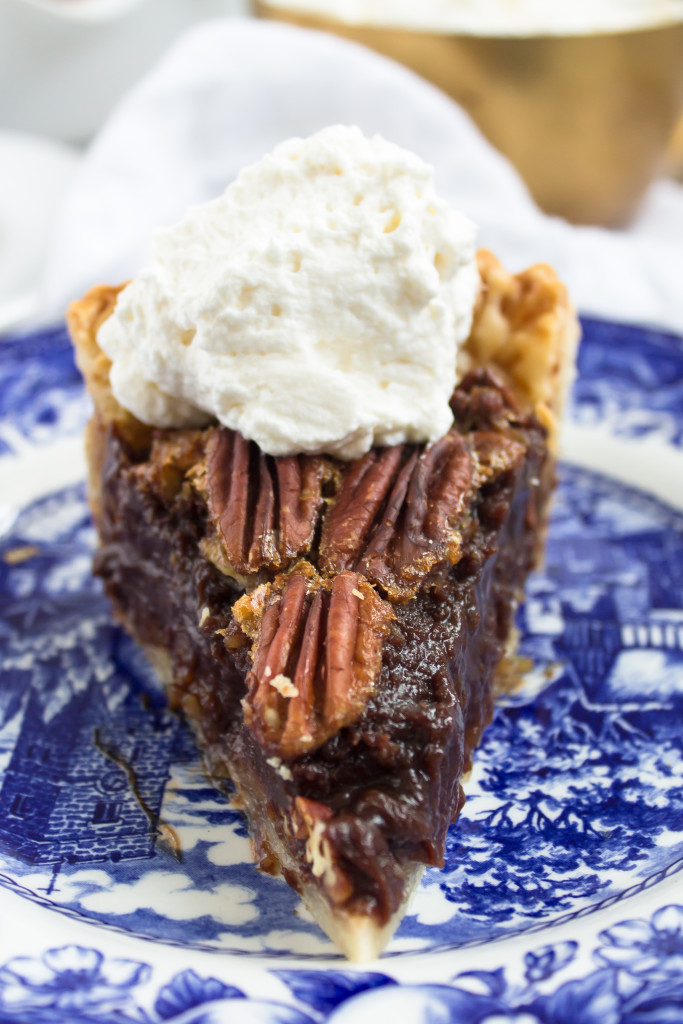 Our other go-to pie is chocolate chip bourbon pecan pie, which was actually one of the first recipes on the blog (you can find it in the recipe archives, but don’t judge the photos from those early days). Filled with chopped pecans, and topped with pecan halves, the pie has a great texture. You can truly taste the bourbon in the pie (another reason it is so tasty), but if that’s not your thing, just cut back on the amount you add. 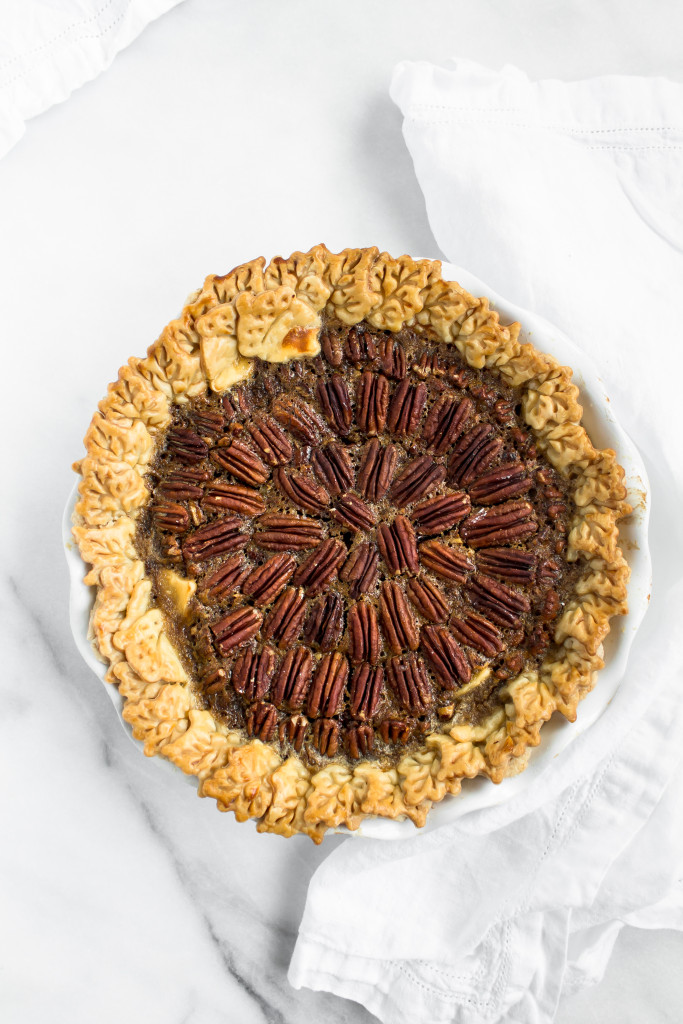 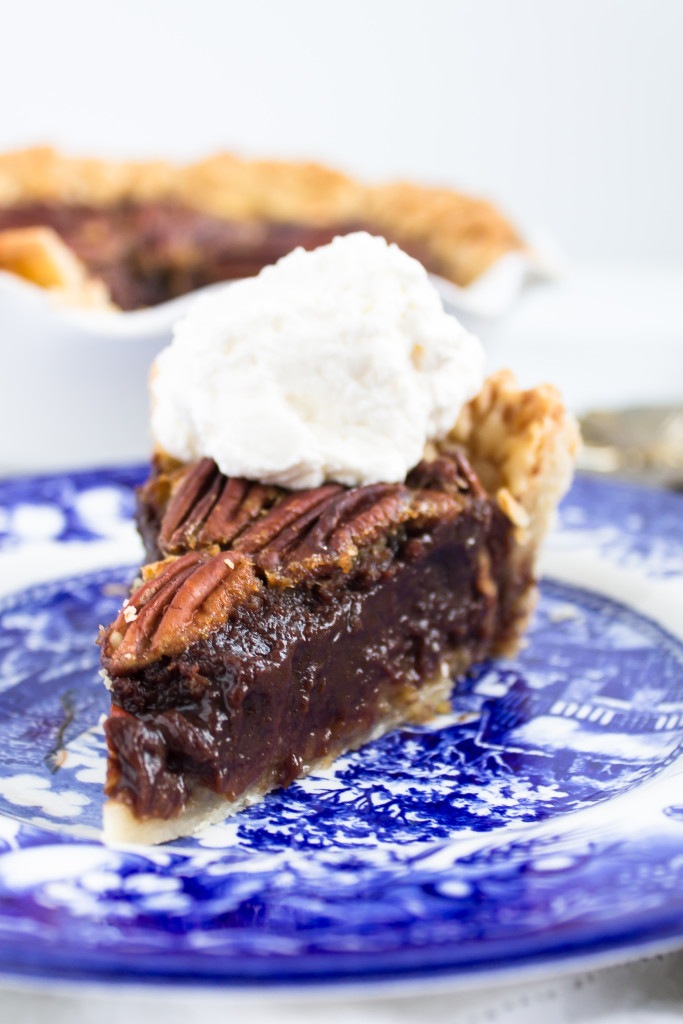 Chocolate chess bourbon pecan pie is an amazing combination of two already wonderful pies. The rich chocolaty goodness from the chocolate chess pie pairs beautifully with the toasted pecans. The gooey pecan pie filling meets the thick, custard-like filling of the chess pie, resulting in a beautiful marriage of the two textures – a pie that is not too thick, but still holds its chocolaty shape when cut. A large dollop of freshly made whipped cream or a scoop of ice cream are the only garnishes you need for the picture perfect plate of Thanksgiving pie. 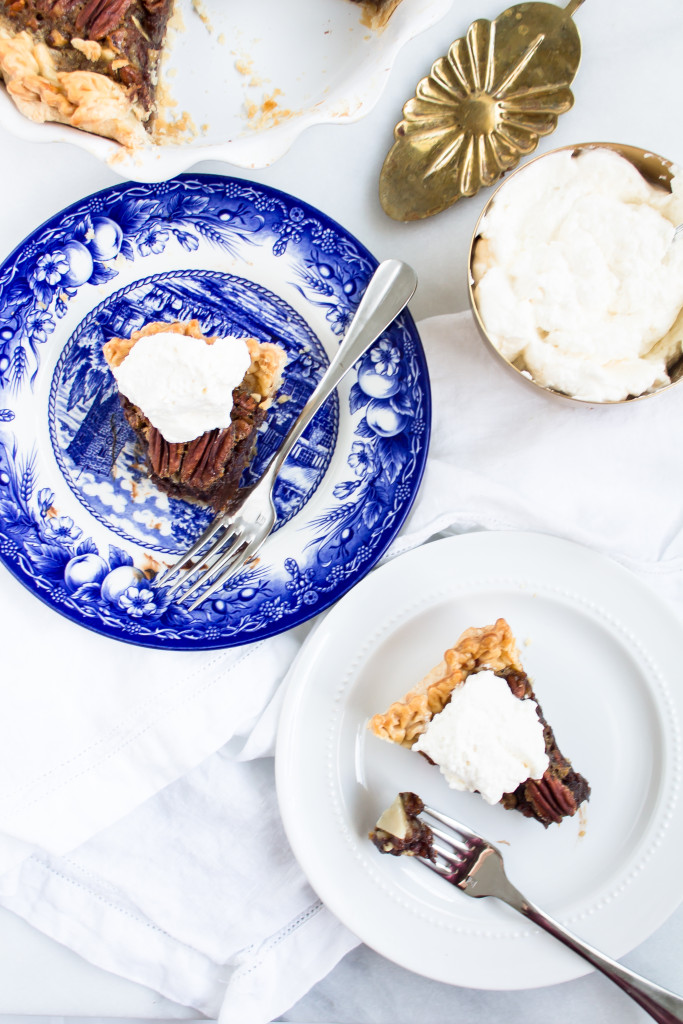 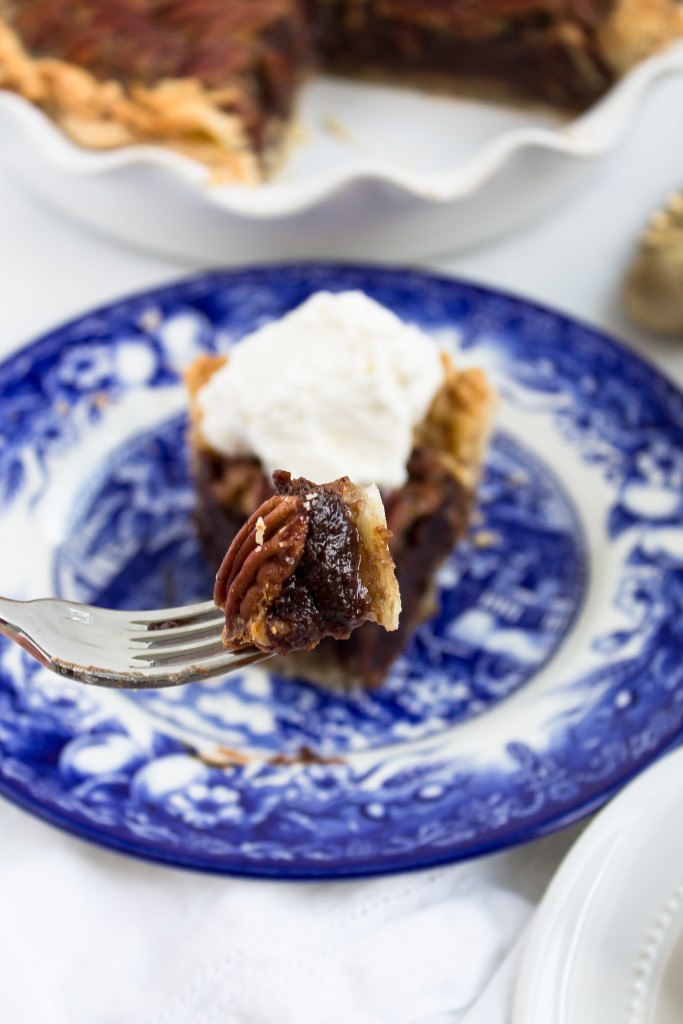 Pecan pies are a showstopper on any dessert table, and with a chocolate chess pie base and a hint of bourbon, this chocolate chess bourbon pecan pie is sure to be a hit.

*This pie crust recipe makes one crust. If you want to make all three, triple the recipe and split it into 3 equal-sized balls, or make three recipes separately. This pie crust is delicious, but no shame if you use the convenient frozen pie crusts – it’s a busy season after all!

My pie dishes are pretty deep, so this recipe only makes two pies. If you are using shallow pie dishes it might make three, in which case make sure you make three pie crusts, and add one more for decorating, if you wish.

Make a well in the middle of the butter-flour mixture and add the ice water, one tablespoon at a time. Mix after each addition just until the dough comes together.

Separate the dough into two equal balls. Roll out the dough balls into small rounds, wrap them in plastic wrap, and chill well before rolling to their full size (about 12 inches) for baking.
When you are ready to make the pies, transfer your rolled-out pie dough to a pie dish and carefully work it into the edges. Fold under any dough that hangs over the edge of the pie dish and crimp the edges as you go around the pan. Wrap the prepared pie plates in plastic wrap and freeze while you prepare the pie fillings.

Make the chocolate chess pie
In a large saucepan, melt the butter and chocolate over very low heat.

In a small bowl, beat the eggs, then stir in the sugar. Stir the egg and sugar mixture into the melted chocolate and butter. Mix in flour, corn syrup, milk, and vanilla. Pour the pie batter into the prepared pie dishes.

In a large bowl, whisk together the eggs. Stir in the corn syrup, sugars, butter, salt, vanilla, and bourbon. Mix in the chopped pecans. Slowly pour the pecan pie filling on top of the chocolate chess pie filling. Top the pies with the reserved pecan halves.

Bake about 50-60 minutes, until the pies are set and no clumps come out on a toothpick inserted into the center. If the crust starts to get too brown, cover the edges with strips of aluminum foil. Cool the pies on wire racks. Serve warm or at room temperature with a dollop of homemade whipped cream. Store the pies at room temperature or in the refrigerator, tightly covered in plastic wrap.

If you make this recipe, I’d love to see it! Tag me (@hopewoodhouse) on Instagram or leave a comment below so I can follow your baking adventures this holiday season!