I have three favorite pies: chocolate chess pie, bourbon chocolate chip pecan pie, and coconut cream pie. Not just any coconut cream pie, but the kind with a flaky crust, golden toasted coconut, rich, pastry cream-like coconut filling, and the fluffiest homemade whipped cream. My love of coconut cream pie is not necessarily because of my southern background, as we never made them at home, but my location definitely enabled my exposure to and exuberance for the delicious pie. 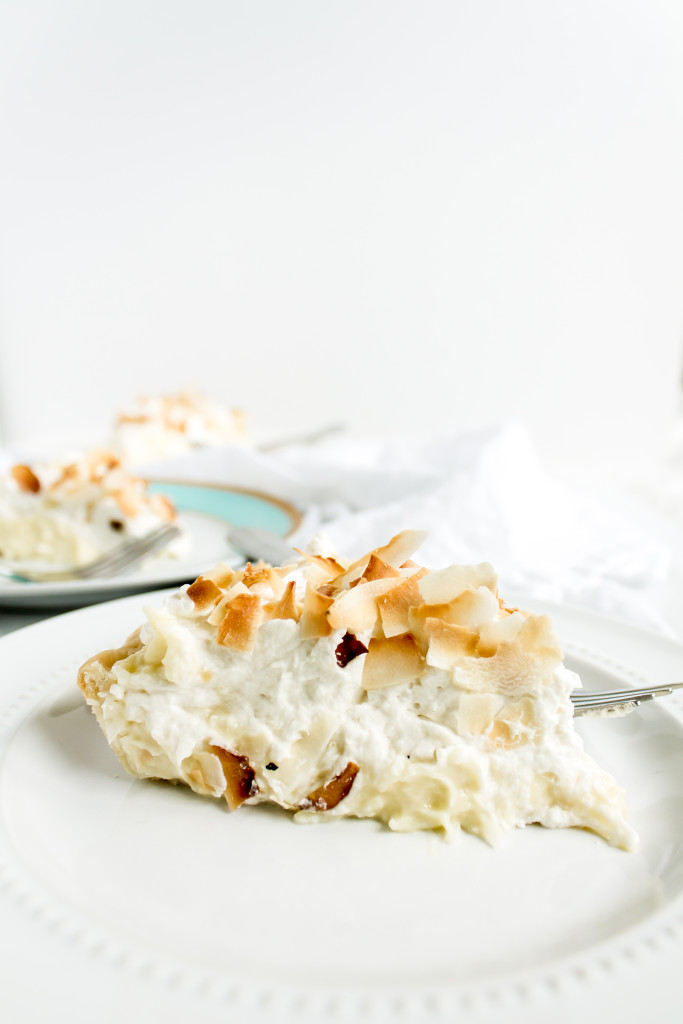 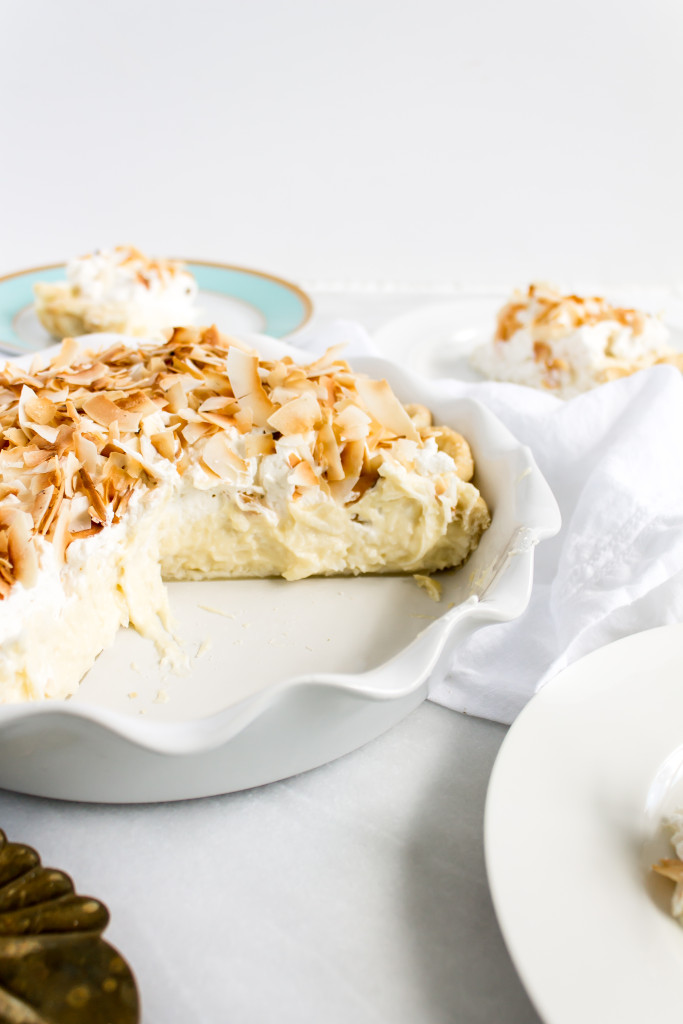 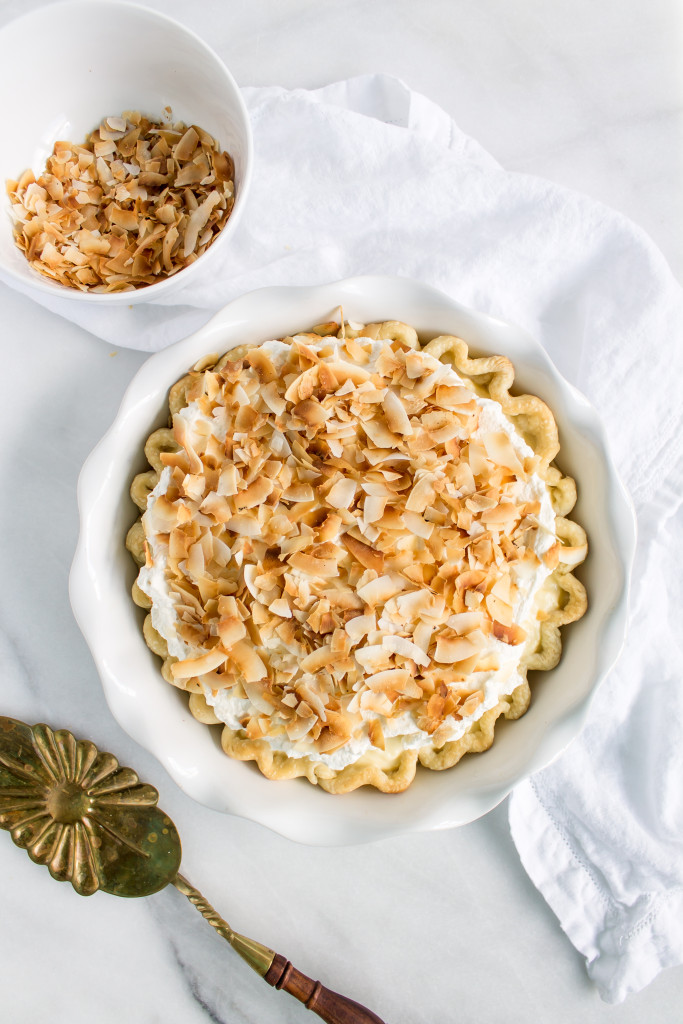 After a particularly rough day during my freshman year of college, I called my mom to vent, talk, and probably cry. She worked about 30 minutes away, which was far enough that I didn’t see her very often, but close enough that she could come over if I needed her to. This arrangement was great for laundry, rides home, and on this particular day, pie. That day, when I was in a typical freshman slump, she dropped everything, picked me up from my dorm, and took me down the road to Foster’s Market where we each picked out a slice of pie to share with each other. There isn’t much that one-on-one time with mum and a slice of pie can’t fix. 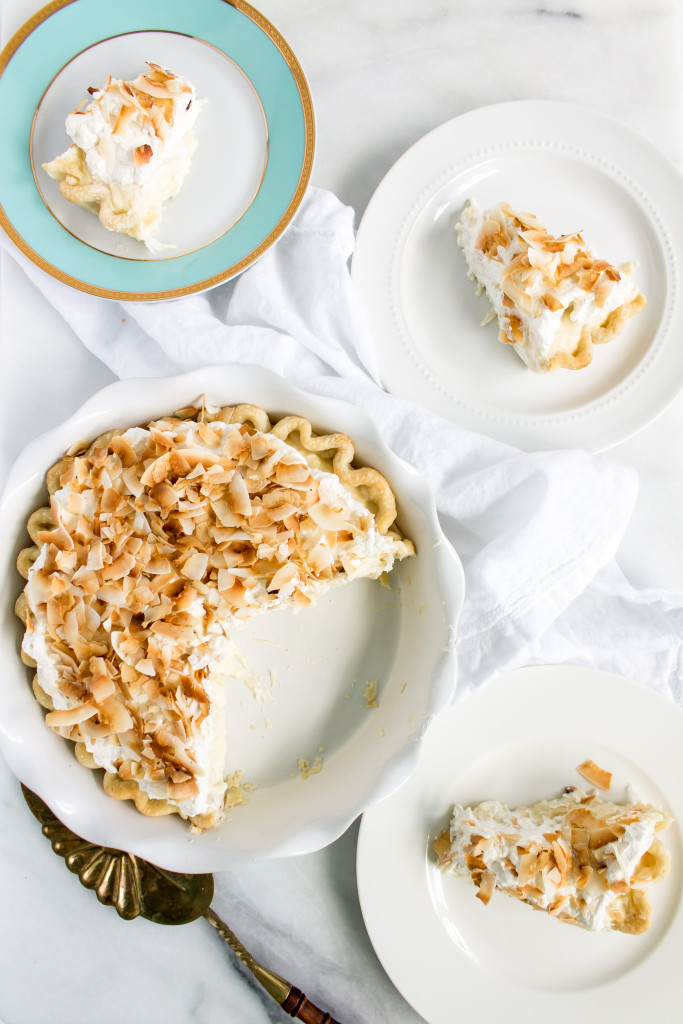 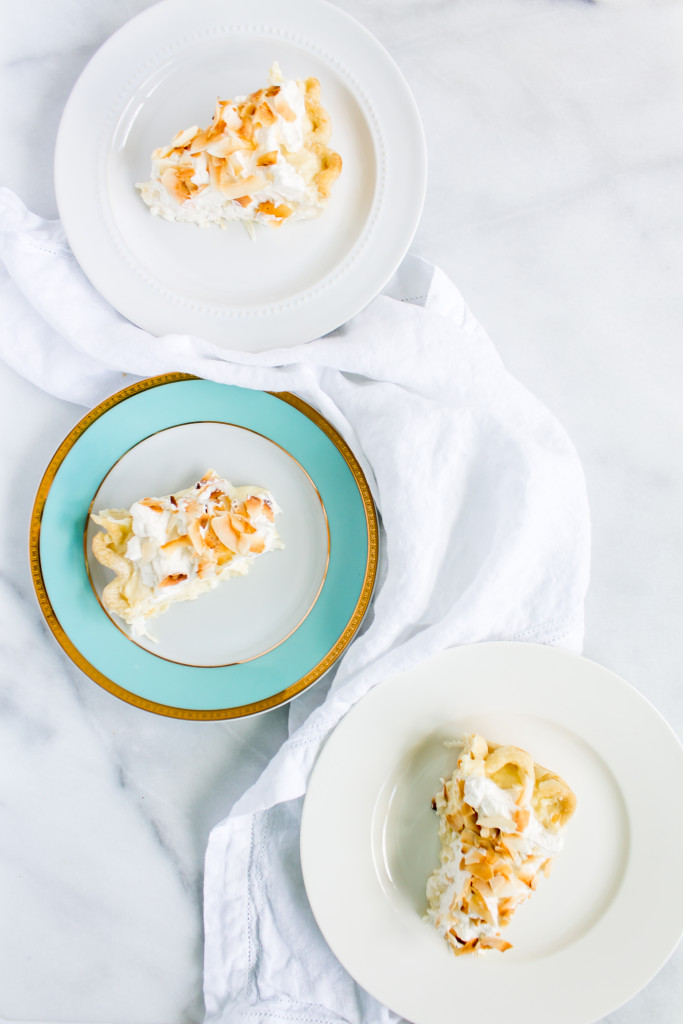 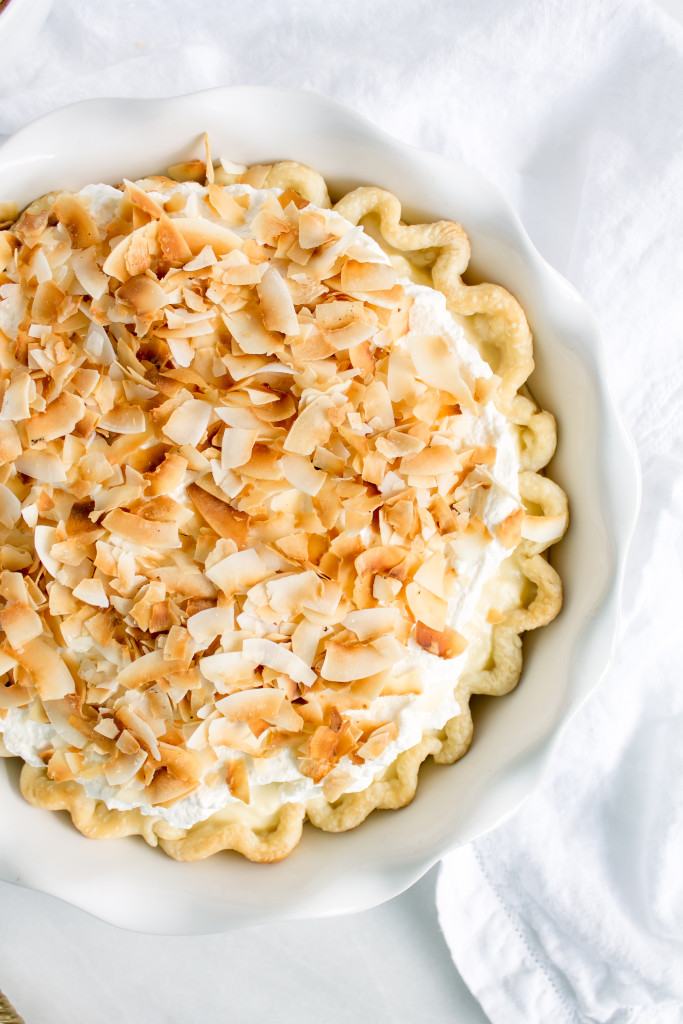 We continued this tradition of going out for pie to catch up during the semester even after freshman year and deemed these outings our “pie dates.” After years of picking out pie from the cold chest at Foster’s coconut cream pie was always our favorite. To this day, years after graduation, we still go out on pie dates. We have added new pies and new restaurants to the mix, but when coconut cream pie is on the menu, you better believe it will be on our table. 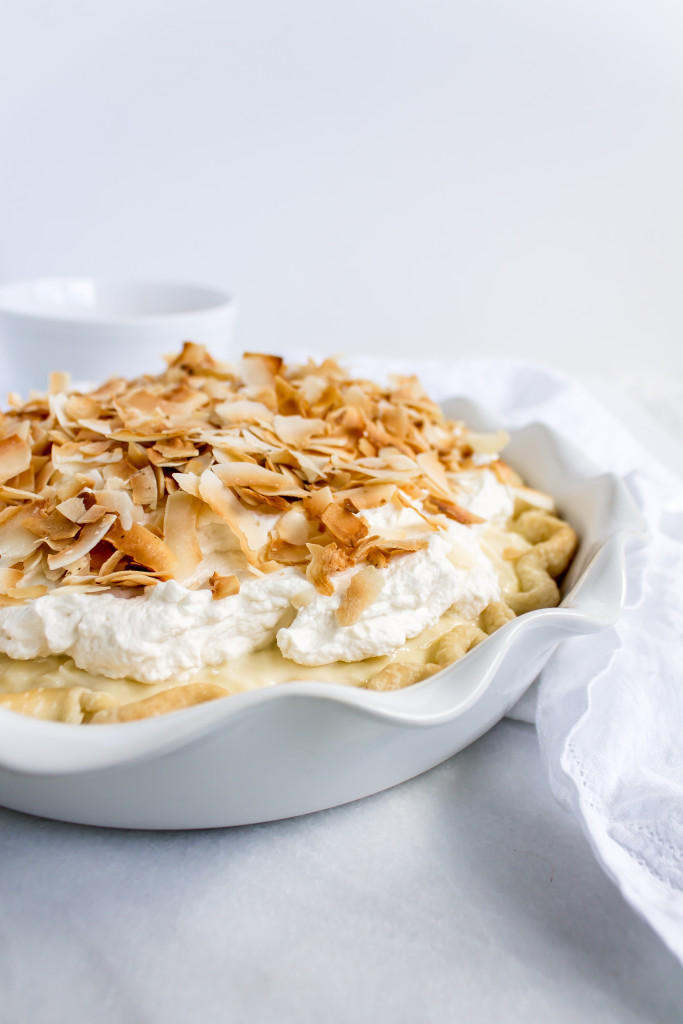 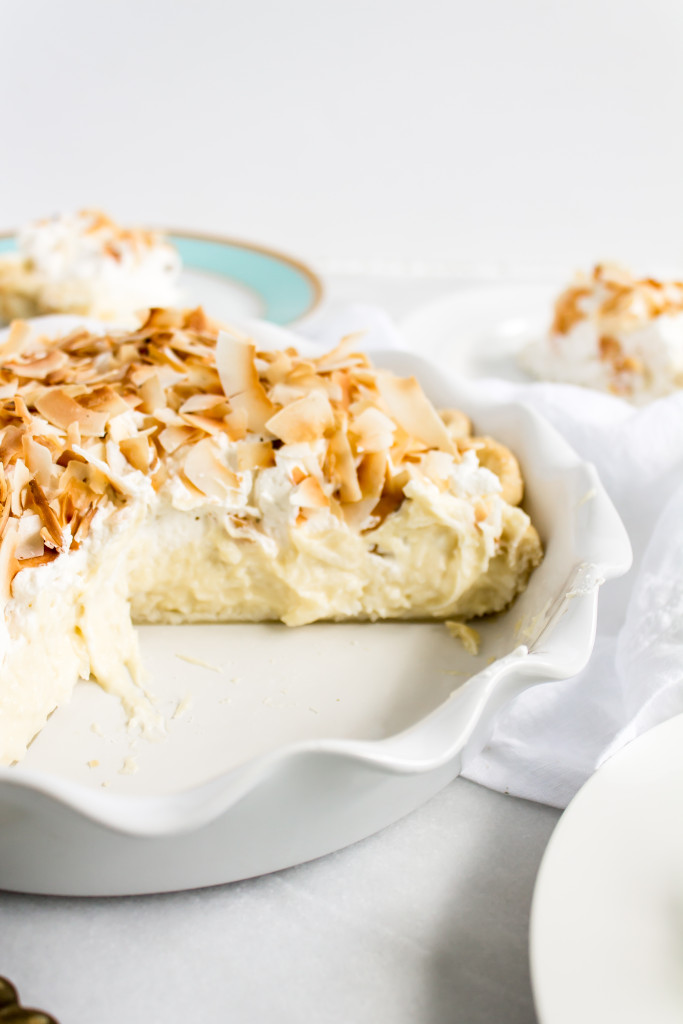 I hadn’t had a great cream pie until those pie dates. Not everyone in my family likes coconut, so coconut-filled desserts were not something we tried very often at home, but because we had access to many great restaurants who serve a good southern cream pie, I still say that my southern location enabled my love for coconut cream pie.

This coconut cream pie is based heavily on my memories of my first Foster’s Market pie. With it’s buttery, flaky crust, thick coconut pastry cream filling, delicious homemade whipped cream topping, and a side of good ‘ol nostalgia, it is forever my favorite.

Pie
Preheat your oven to 450 degrees F. Press your pie crust against the sides and bottom of a pie dish. Fold a layer of the crust under at the top of the pie dish and pinch to create the edge of your pie crust. Cover the pie dough with aluminum foil or parchment paper and weight it down with dry beans or pie weights. Bake the pie crust 10-12 minutes, or until golden. Set aside to cool completely.

In the bowl of an electric mixer, combine ½ cup of the half-and-half and the cornstarch. Add the eggs and mix thoroughly.

In a small saucepan over medium heat, mix the remaining 2 ½ cups half-and-half, sugar, salt, and vanilla. Bring the mixture to a low boil, stirring every now and then until the sugar dissolves. Slowly pour 1 cup of the sugar mixture into the egg mixture while whisking. Whisking constantly, pour the tempered egg mixture back into the saucepan with the rest of the sugar mixture. Continually whisking, cook over low heat until thick, about 5-8 minutes. Remove the pot from the heat and whisk in the butter until melted, then the coconut. Let the filling cool slightly before filling the pie crust.

After it has cooled a bit, pour the filling into the cooled pie shell and refrigerate for at least 4 hours or overnight.

Whipped Cream and Assembly
In the bowl of an electric mixer, whip the cream until loose peaks form. Add the sugar and vanilla and whip until stiff peaks form. When you are ready to serve the pie, top it with the whipped cream and toasted coconut. 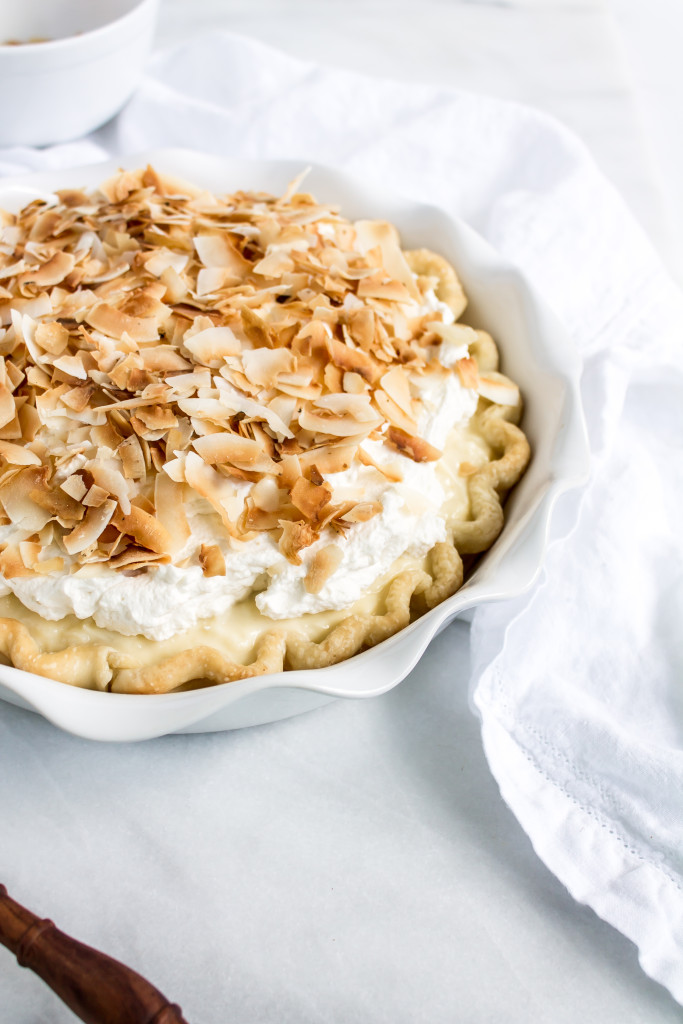