While cake is not my preferred dessert, I love the creativity that comes with making a cake. Each layer and part is an opportunity to create one piece of a greater flavor profile. This apple cake with apple cider soak, brown butter crumble, and cinnamon frosting is the perfect example. 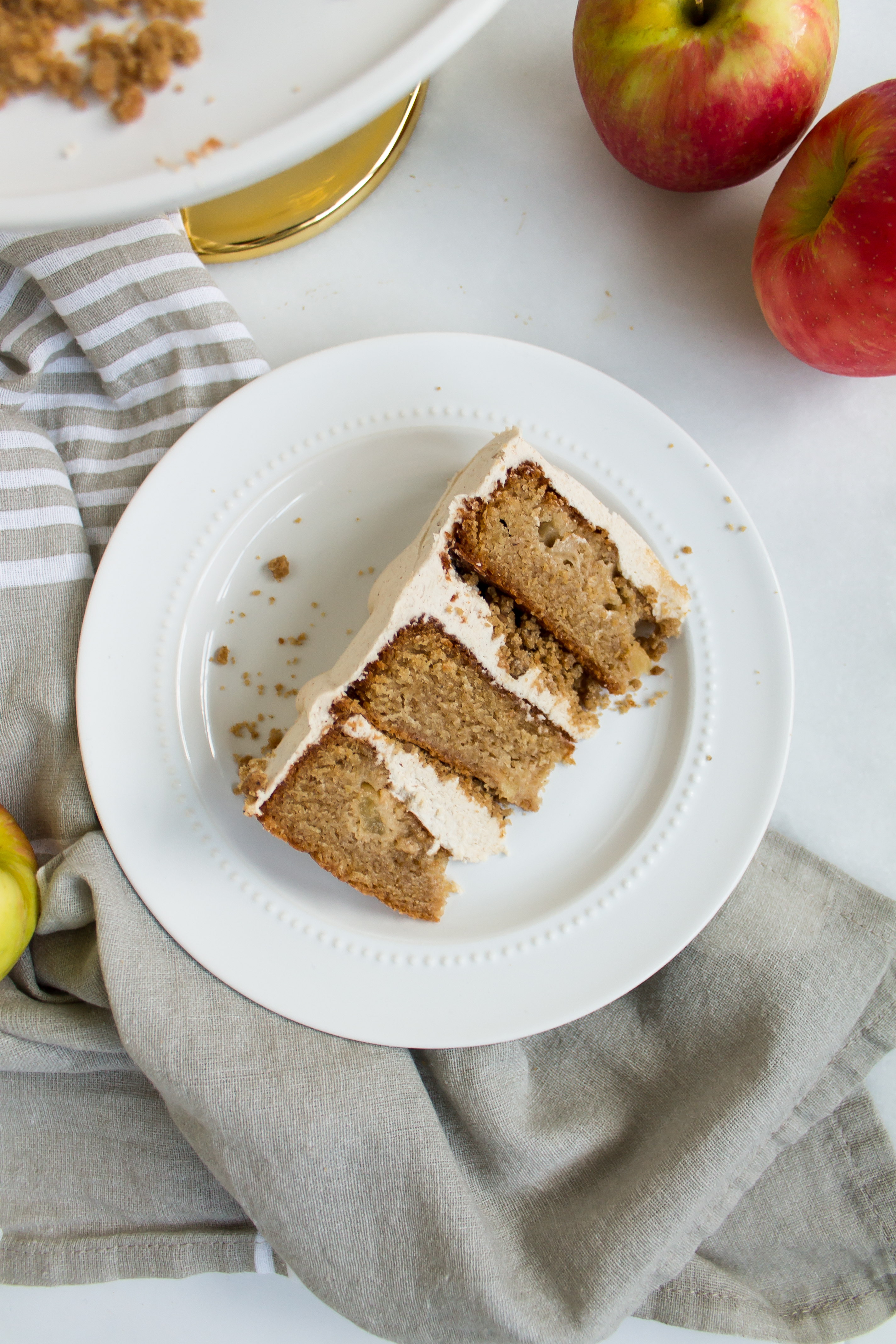 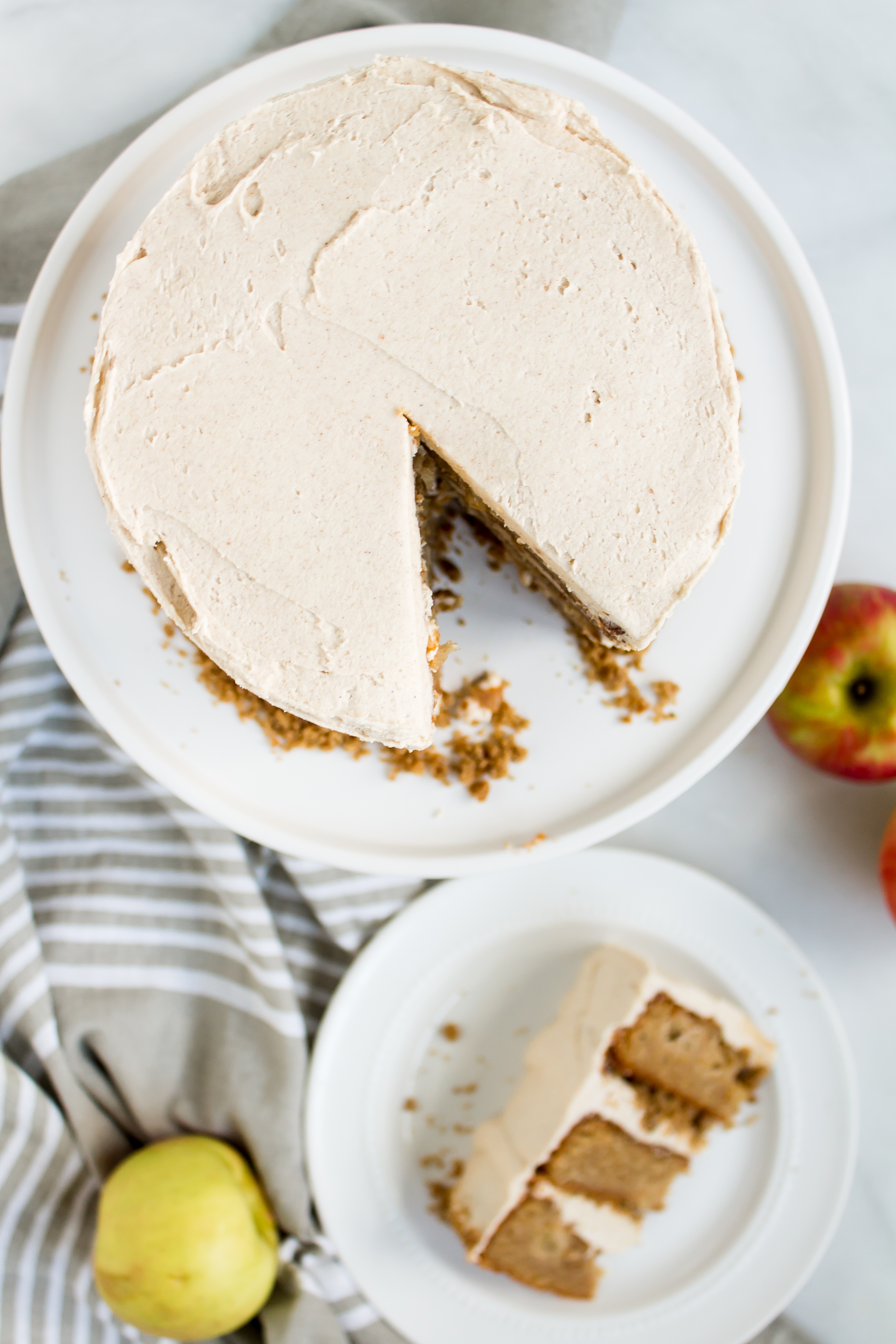 Fall and winter are my favorite times of year to create new cakes. I don’t know if it is because the cool weather begs for a treat fresh from the oven, if the ingredients and flavors of the season are some of my favorites all year, or if the food-centric holidays keep me brainstorming about new desserts to share with friends and family. The brown butter sweet potato cake with chocolate ganache filling and bourbon molasses buttercream from last year and the pumpkin pie cake with shortbread bites, cinnamon cream cheese frosting, and maple candied pumpkin seeds from the year before are two of my favorites, and are just two more examples of the fun we can have with fall cakes. 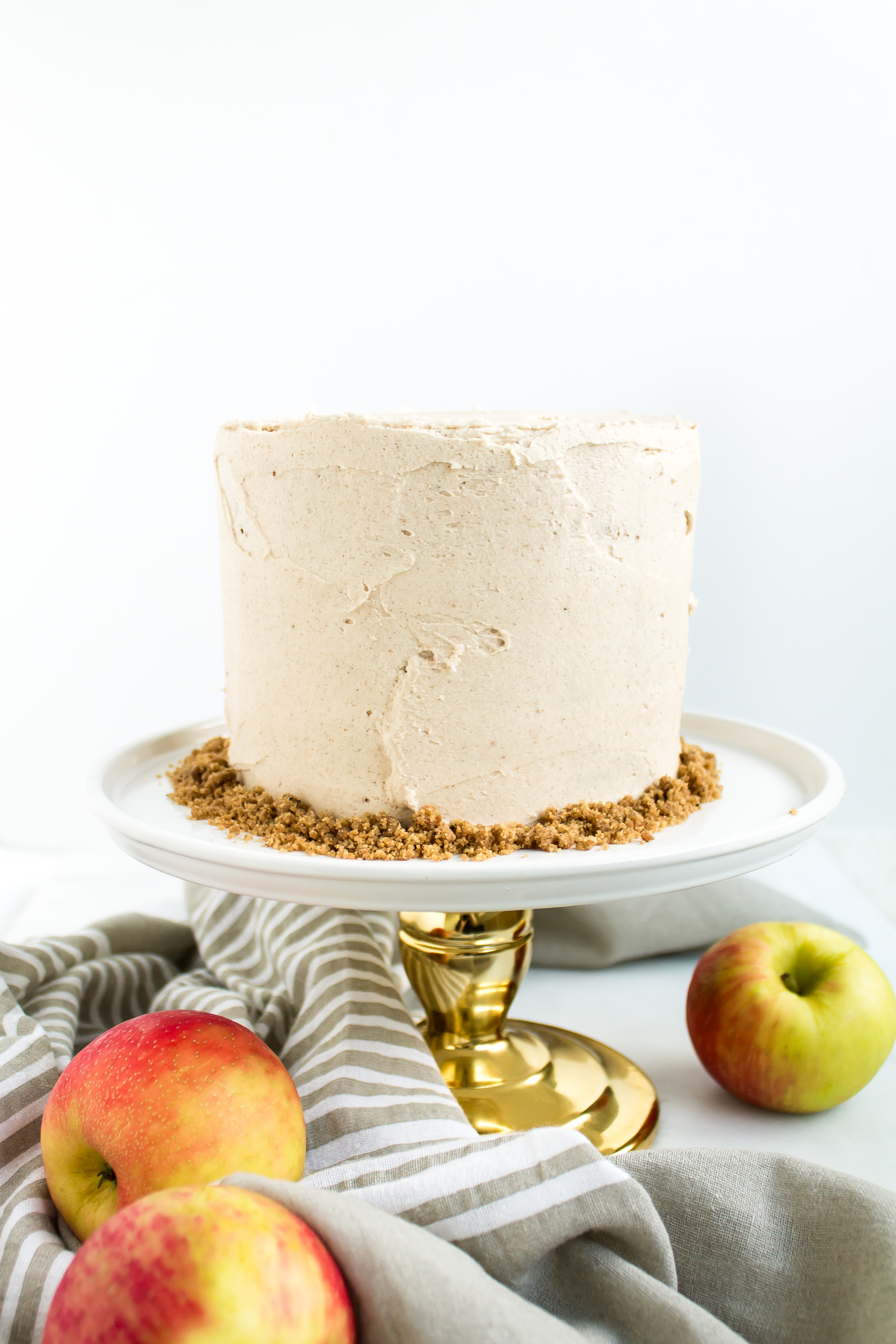 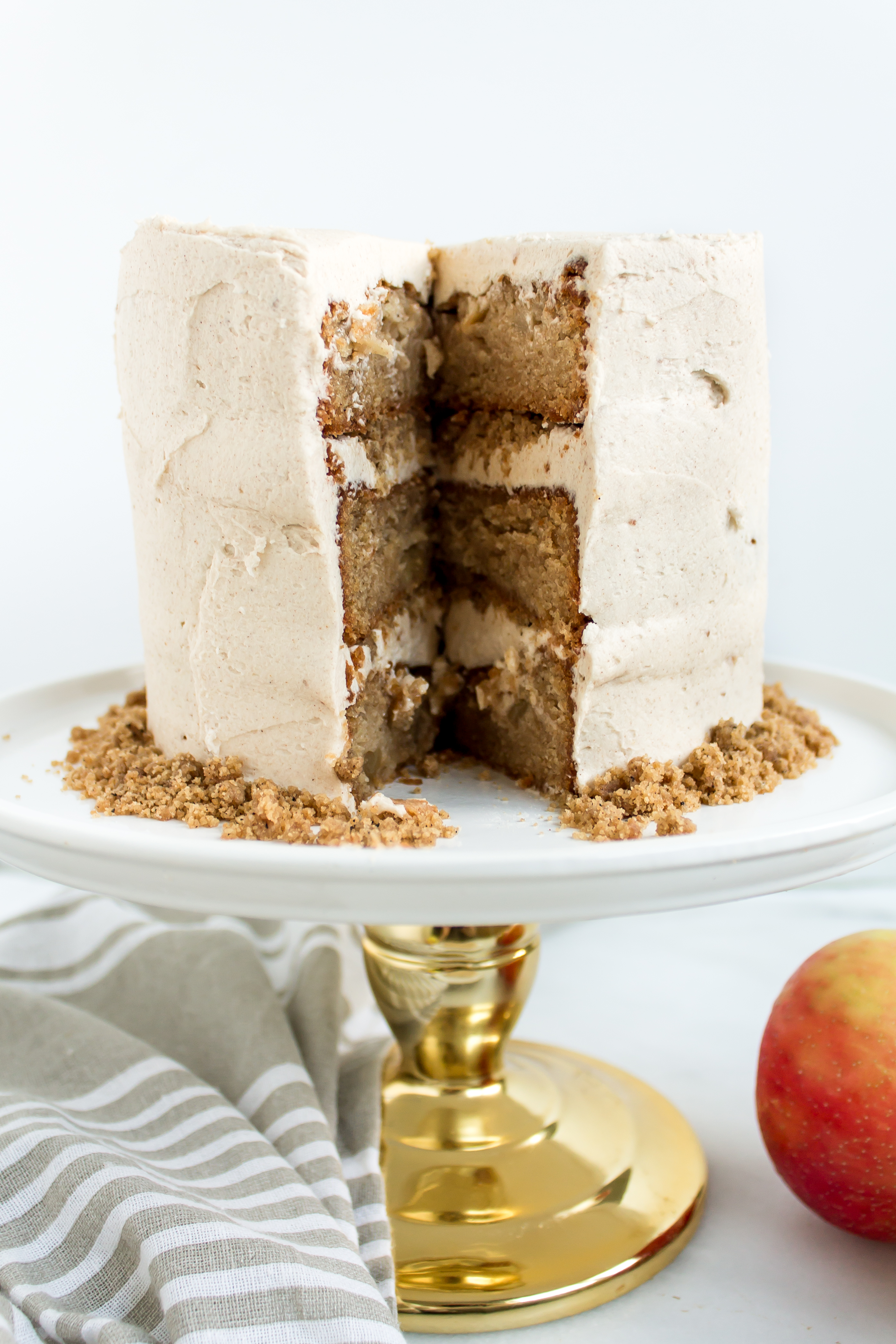 This apple cake is filled with soft pieces of cinnamon and brown sugar coated apples snug in a spice cake. The fluffy cinnamon frosting, crisp, nutty brown butter streusel chunks, and spiced apple cider soak bring wonderful flavors and textures to the cake. Together, all of the ingredients complement each other and bring the best of the warm fall flavors together in one cake. 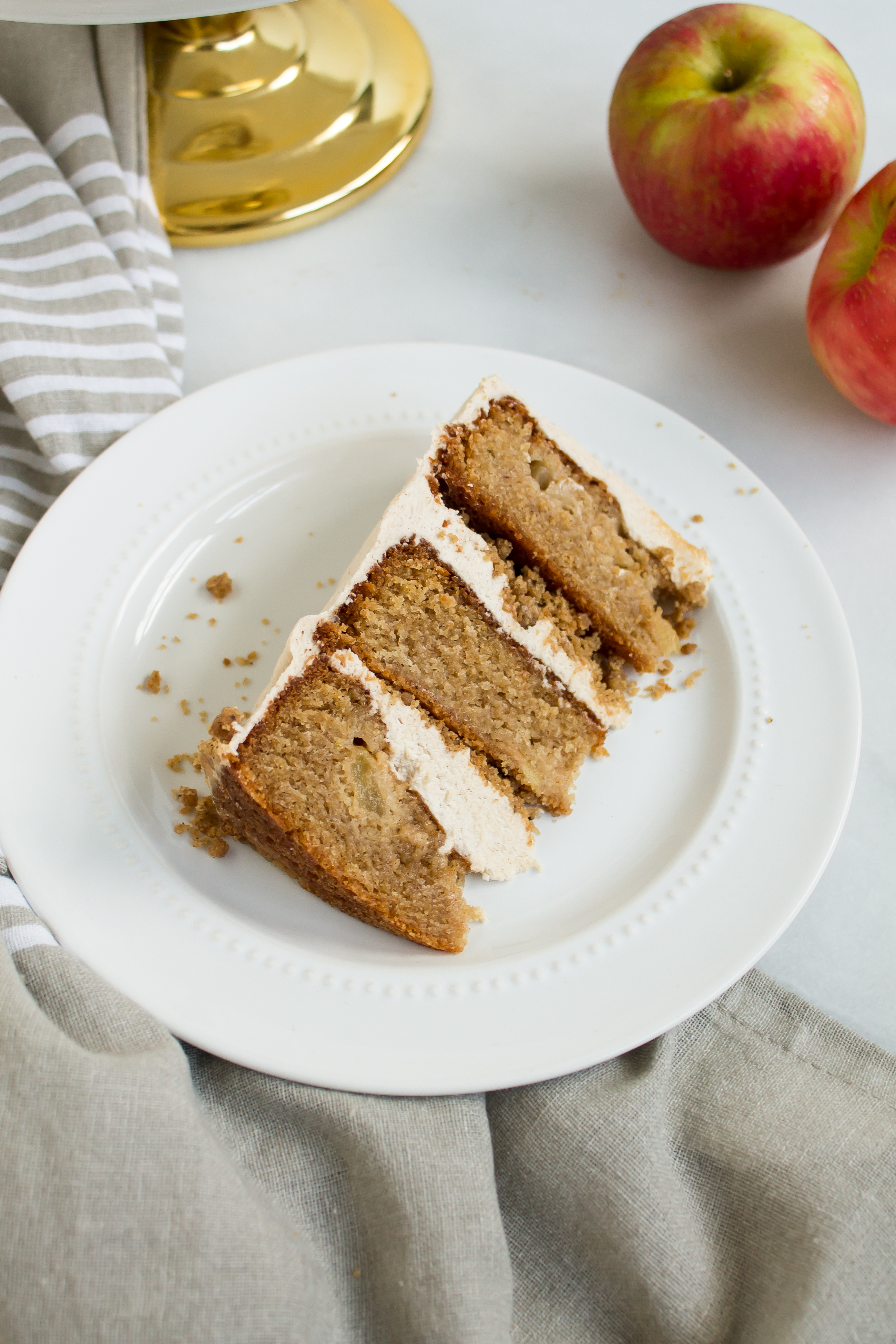 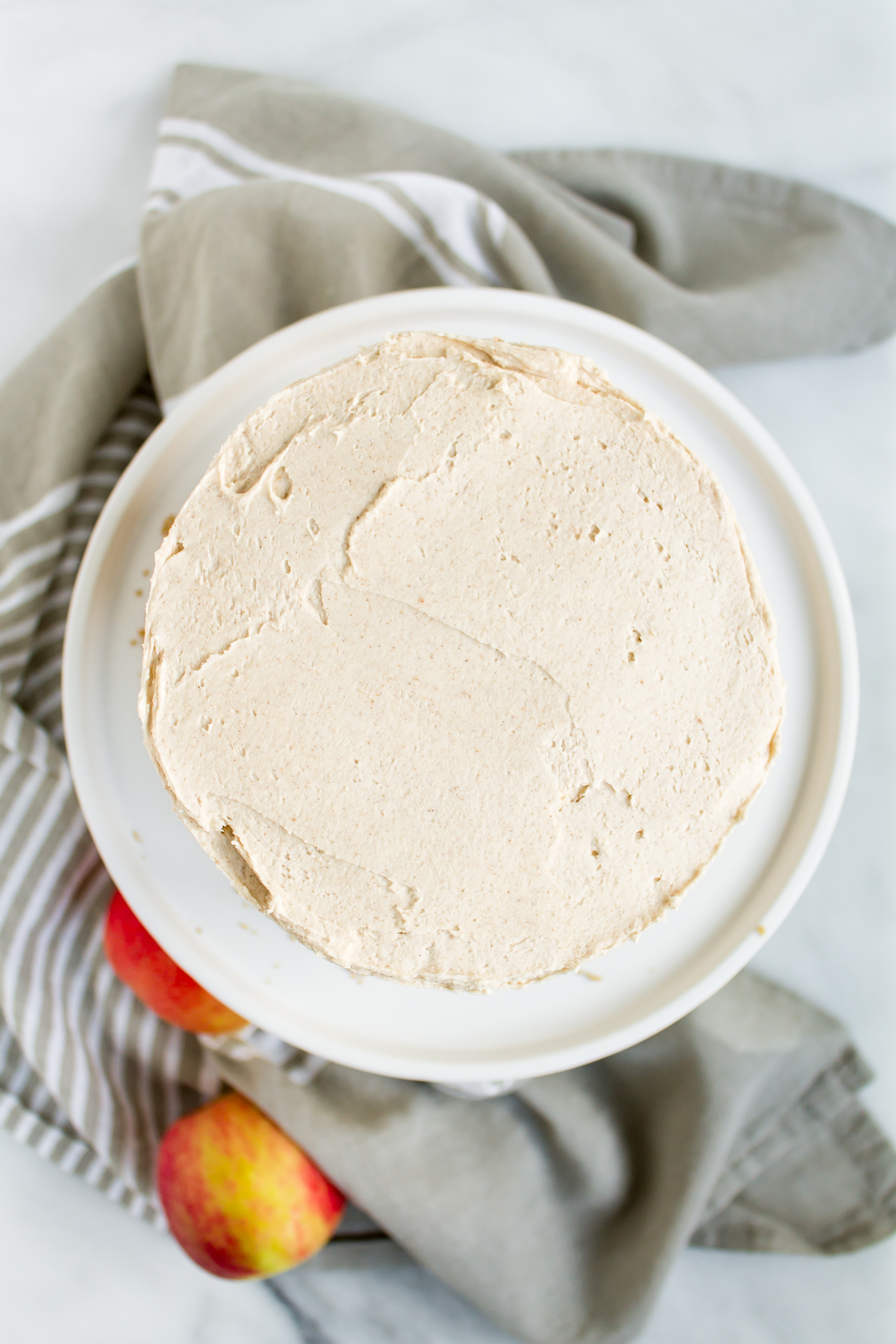 Like the last two fall cakes, this one has multiple parts, which can be intimidating. I have heard from multiple people that some cakes just have too many parts and pieces and are too difficult to make. Since the cake does have different parts, break it up over the course of a few hours or a few days. It isn’t nearly as daunting if you are just making the brown butter crumble, or the cinnamon frosting, and once you make each part, it is simple to put them together as a whole. I made this cake over the course of a few days, working little by little after work each day. The brown butter crumble was day 1, the apple cake was day 2, and the apple cider soak, cinnamon frosting, and assembly were day 3. 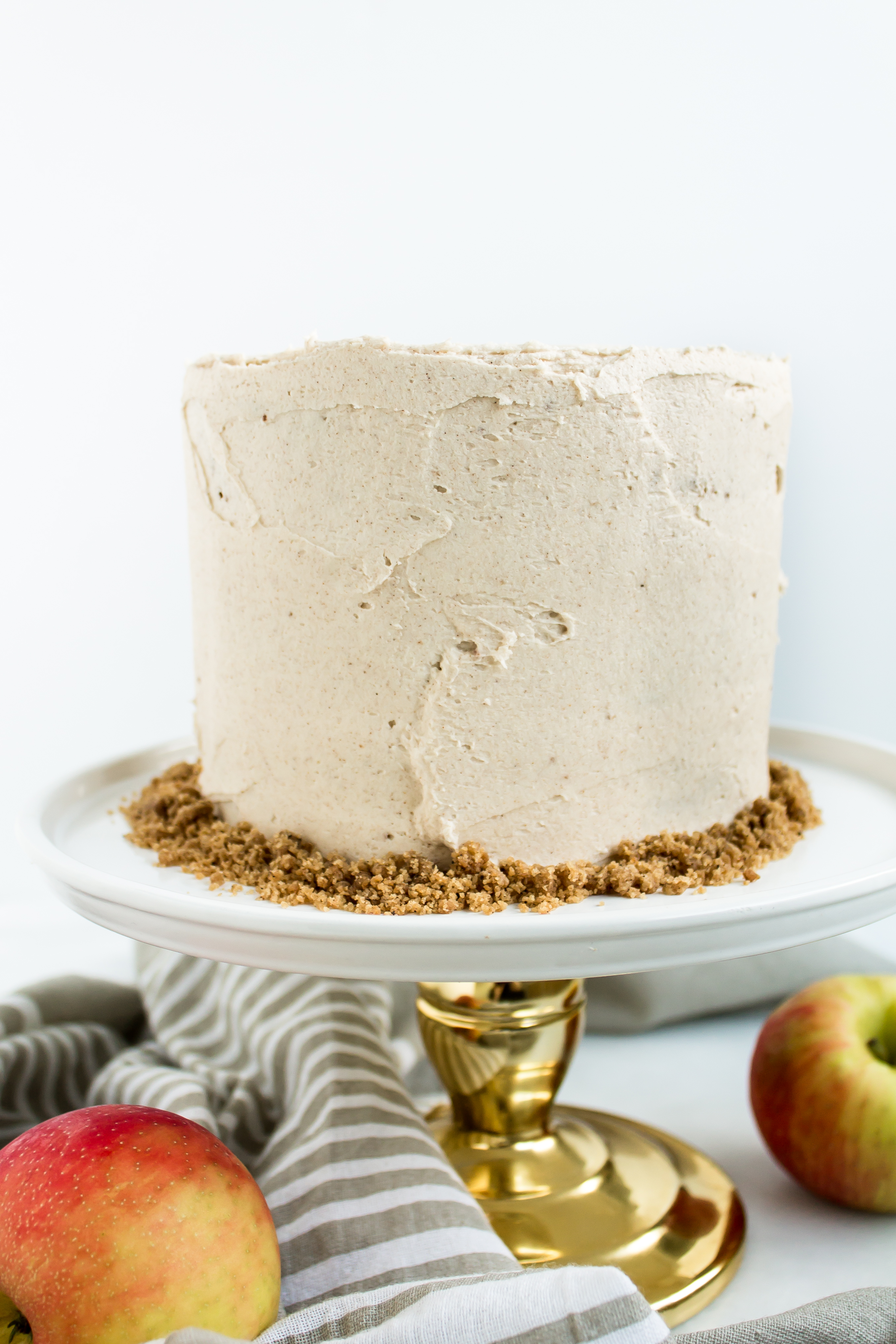 During this time of year with so many gatherings, branch out of your comfort zone and use this as a time to make something just a bit more special for your friends and family. Filled with warm spices and soft chunks of cinnamon apples nestled between crisp brown butter streusel and fluffy cinnamon frosting, apple cake with brown butter crumble and cinnamon frosting is the perfect fall treat.

Preheat the oven to 350 degrees F. Grease and flour three 6″ cake rounds and line each with a parchment paper round.

In a medium bowl, combine flour, baking powder, spices, and salt. Set aside.

In the bowl of a stand mixer fitted with the paddle attachment, combine the vegetable oil and sugars. Beat until well combined, about 2 minutes. Add the eggs one at a time, incorporating after each addition. Stir in the vanilla.

With the mixer on low speed, add the flour mixture in 3 parts until no flour streaks remain. With a spatula, fold in the cinnamon apples. Spread the cake batter evenly into your prepared pans and bake for 45-50 minutes, or until a toothpick inserted into the center of the cakes comes out clean.

Place the cakes on wire rack to cool for 10 minutes, then remove them from their pans and transfer them to a wire rack to cool completely before frosting and assembling. I often put my cakes in the fridge at this point to speed up the cooling process.

To make the apple cider soak
Whisk together the cider, brown sugar, and cinnamon in a small bowl until the sugar is completely dissolved.

To make the brown butter crumble
Line a loaf pan with parchment paper and set aside. Preheat the oven to 350 degrees F.

In a medium bowl, combine all of the ingredients except the browned butter. Pour in the butter and use your hands or a spatula to bring the ingredients together until all of the dry ingredients are moist and you can form a ball with the mixture. Break the topping into small pieces and create an even layer in your prepared loaf pan. Bake for 15-20 minutes, or until the crumble is browned but still soft when you press into it. Let the crumble cool completely in the pan. Once it has cooled, remove the solid crumble and break it into small pieces. Set aside until you assemble your cake. You can make the crumble ahead of time and store it in an airtight container at room temperature for a few days.

To make the cinnamon frosting
In a stand mixer fitted with the paddle attachment, beat the butter on medium speed for about 30 seconds. Reduce the mixer to low speed and add the powdered sugar, one cup at a time, until it is fully incorporated. Increase the mixer to medium speed again and beat the mixture for about 1 minute. Add the brown sugar, vanilla, cinnamon, and salt and beat until light and fluffy, about another 5 minutes. Use a spatula to mix the frosting by hand for before frosting your cake to push out any air pockets created by the mixer.